New Zealand prime minister Jacinda Ardern set a standard for leaders worldwide when she picked up US television host and writer Stephen Colbert, who hosts CBS talk programme The Late Show With Stephen Colbert, from the airport during his visit to her country.

When Colbert thanked Ardern for “cutting into her executive time” to drive him from the airport, she replied: “I’m a woman. I multitask.”

During the visit, which was filmed for show, Colbert commended Ardern's accomplishments as prime minister, saying: “Ardern took office in 2017 as one of the world's youngest leaders at 37”.

He commented that she was also “the first head of state to bring their baby to the floor of the UN” (Sept 2018). Ardern had returned to work in early August after giving birth to her daughter on June 21. She brought her daughter with her to New York for the UN general assembly because she was still being breastfed at that time, setting a standard for successful women who balance a career and motherhood. Ardern with her baby daughter, at the Nelson Mandela Peace Summit, a day before the General Assembly at the United Nations in New York in Sept 2018. Photo: AFP/Don Emmert

Colbert also referred to “the tragic shooting at a mosque at Christchurch, after which (Ardern) called for legislation to ban semi-automatic weapons and got it passed within one month”.

Although his visit was in late 2019, people are still talking about it on social media and sharing the video link to the incident in 2020.

Twitter user Gaurav Dalmia (@gdalmiathinks) says: “I’d vote for New Zealand Prime Minister Jacinda Ardern. In the story below (referring to video of Ardern fetching Colbert from the airport), the best was her honest statement: ‘I'm a woman; I multi task.’ That line and her humility will go down in the annals of leadership history.” (July 4)

Another twitter user Riya_s (@Riyadenny) remarks “... Stephen Colbert went to Auckland to interview NZ PM. He requested that he be picked up from airport. Now watch the rest (referring to video of Ardern fetching Colbert from the airport) – really down to earth.” (July 2)

“So cool. No paraphernalia around, ”(July 4) tweeted Harsh Goenka (@hvgoenka). 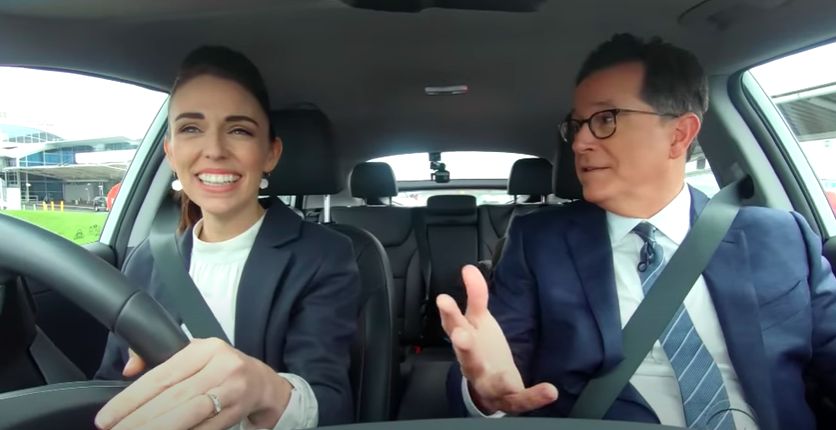 Action! Film-makers back to work in New Zealand after coronavirus

New Zealand's Ardern turned away from cafe under coronavirus rules

Women bear the brunt of virus fallout in the workplace