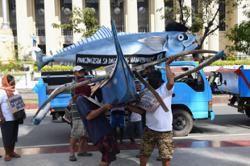 Bruce Lee in the film 'Enter The Dragon'. Photo: TNS

The martial arts master died in Hong Kong in July 1973, with brain swelling ruled as the cause of death.

A study published in the December issue of Clinical Kidney Journal, however, claims Lee drank more water than his body could handle, and that the real cause of death was hyponatraemia.

The condition occurs when the amount of water in a person’s body reduces the sodium levels in their blood, preventing them from excreting water through urinating fast or efficiently enough.

Lee, who died at age 32, had a “chronic fluid intake” that included alcohol and a juice-based diet, used marijuana and previously injured his kidneys doing martial arts – all risk factors for hyponatraemia, the study says.

“We hypothesise that Bruce Lee died from a specific form of kidney dysfunction: the inability to excrete enough water to maintain water homeostasis,” wrote the researchers, a group of doctors from Autonomous University in Madrid.

“This may lead to hyponatraemia, cerebral oedema and death within hours if excess water intake is not matched by water excretion in urine.

“Given that hyponatraemia is frequent, as is found in up to 40% of hospitalised persons and may cause death due to excessive water ingestion even in young healthy persons, there is a need for a wider dissemination of the concept that excessive water intake can kill.”

The researchers noted the hyponatraemia may have caused the brain swelling doctors found in 1973.

“Ironically, Lee made famous the quote ‘Be water my friend’, but excess water appears to have ultimately killed him,” the researchers conclude.

Theories have long circulated about Lee’s cause of death, including claims he suffered heat stroke, poisoning – possibly accidentally after consuming tainted aspirin – or an assassination by triad gangsters.

The idea of a supernatural family curse has also been floated – a theory apparently reverse-engineered after Lee’s son Brandon’s accidental death while filming The Crow in 1993. – New York Daily News/Tribune News Service