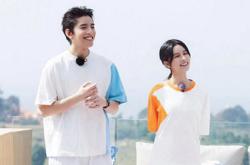 Jordan Chan (left) and Julian Cheung shaved their hair while performing on reality show 'Call Me By Fire'. Photos: Call Me By Fire/Weibo

Hong Kong stars Jordan Chan and Julian Cheung surprised fans on Friday (Oct 28) when they shaved off their hair in real time on the second season of popular Chinese reality singing show Call Me By Fire.

Actor-singers and good pals Chan, 55, and Cheung, 51, have known each other for 27 years since they starred in the movie Happy Hour (1995), and have worked together on several TV shows.

During the performance, Jordan Chan and Cheung faced each other on stage but were separated by a mirror, and wore matching dark red and black suits. Things took an unexpected turn when the pair whipped out electric clippers from their pockets during the climax of the song.

Both of them looked angrily into the mirror, and started shaving furiously.

Compared with Cheung’s restrained performance, which saw him shave off a few locks, Chan was more aggressive, eventually shaving off almost all his hair, leaving himself with a buzz cut.

The dramatic performance was met by loud applause and cheers from the audience, with fellow contestants Lee Seung-hyun and Fan Shiqi appearing to hold back their tears.

Chan, who won Call Me By Fire’s first season in 2021 and appears to be seriously gunning for a second victory, was also emotional when he and Cheung were interviewed on stage.

He said he had gone through several performances and seen many outstanding artistes in the past year, adding: “I decided to get rid of the hair since I haven’t tried doing so on stage.”

Their performance also trended on Chinese social media, with many netizens praising it. And the duo’s efforts paid off, as it helped their team top the final rankings on Friday.

Taiwanese actor Talu Wang and Chinese actor Jin Han were eliminated in that round. – The Straits Times/Asia News Network