On Sept 16, Blackpink announced the release of their second album Born Pink and a music video for their single Shut Down after a two-year hiatus.

On the video, two members of Blackpink can be seen wearing some of Indonesian designer Diana M Putri’s pieces, much to the delight of the designer as well as the group’s Indonesian fans.

The designs are also worn for other promotional materials related to the album.

“It’s truly a dream to be able to dress some of the most amazing girls in the K-Pop scene today. Here’s to many more iconic looks,” Diana wrote on her Instagram.

Diana shared that it was a sudden request from YG Entertainment, Blackpink’s agency.

“It was a sudden request from YG Entertainment [Blackpink’s management company], requesting that the wardrobe pieces arrive in South Korea within four days, as we finally chose the pieces from the Diana Couture archive, [sending] both from Indonesia and Los Angeles,” Diana told Liputan6. 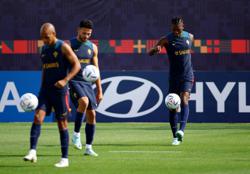