Pop star Billie Eilish to perform in KL on Aug 18 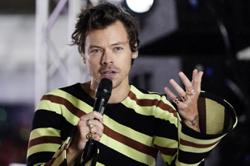 The 20-year-old will stage her Happier Than Ever, The World Tour at National Stadium, Kuala Lumpur at 8.30pm.

Grammy-winning artiste Billy Eilish is heading to Asia for her world tour in August and will be stopping in Kuala Lumpur on Aug 18.

The 20-year-old will stage her Happier Than Ever, The World Tour at National Stadium, Kuala Lumpur at 8.30pm.

Eilish is known for hits such as Bad Guy, Happier Than Ever and the theme to James Bond's No Time To Die.

In 2020, Eilish became the youngest artiste (at 18) to win the top accolades at the Grammys including Record Of The Year, Song Of The Year (for Bad Guy) and Album Of The Year (for When We All Fall Asleep, Where Do We Go?).

Apart from Kuala Lumpur, Eilish will also be stopping in Asian cities such as Bangkok, Singapore, Manila, Seoul and Tokyo.

Tickets for Eilish's show in Kuala Lumpur are priced at RM308, RM408, RM508 and RM598 and will be on sale on June 24 for fan club members, on June 25 for Live Nation members and June 27 for general public via golive-asia.com or GoLive Ticketing App.