Britain's Crown Prosecution Service said on Thursday (May 26) actor Kevin Spacey had been charged with a number of sex offences including sexual assault against three men following an investigation by police in London.

The Oscar-winning actor had been charged with four counts of sexual assault against the men, Rosemary Ainslie, Head of the CPS Special Crime Division, said in a statement. 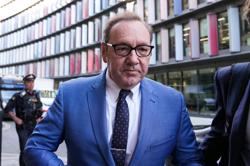