Taiwanese actress Ady An has deleted all the photos with her husband, Macau tycoon Levo Chan, on social media.

An, 41, is married to Chan, the chief executive officer of Tak Chun Group, Macau's second-biggest junket operator, since 2017.

The couple have two children – a son nicknamed "66" who turns three in July and a one-year-old daughter.

Chan, 49, was reportedly arrested in late January with a 34-year-old man for alleged illegal gambling and money laundering.

An used to share many lovey-dovey photos with him on Chinese social media platform Weibo on special occasions like birthdays and Valentine's Day.

However, she has stopped doing so since January, with her last post dated Jan 13.

The star of Taiwanese idol dramas such as The Outsiders (2004) and Autumn's Concerto (2009 to 2010) has also restricted access to her posts from the last six months.

There are only three posts left on her account, including one of her wishing her fans a happy new year on Jan 1 and another of a video of her son on Jan 13.

She has not reacted publicly to her husband's arrest.

This has lead to all sorts of speculation, including a possible return to acting or her retiring totally from public life. – The Straits Times/Asia News Network 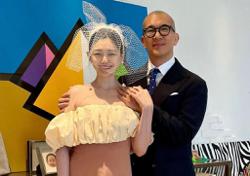