Even though she debuted in 2015 as a member of the girl group, she admitted that she was all nerves and full of doubts.

“I questioned myself, wondering if I could do it right without making any mistake. But I am confident,” she declared before performing on stage.

“It would be a lie if I said I didn’t’ feel the pressure striking out on my own. But I found out what I needed preparing for this and made up through practices,” said the performer.

The five-track EP signals a new beginning, she noted, and she tried to put in a range of different tones in the album. She wants to create a space with her own color, and chose Aria as the title of the EP as well as the main track.

The color of her choice? Sunny yellow that is bright and also fresh. – By Hwang You-mee/The Korea Herald/Asia News Network 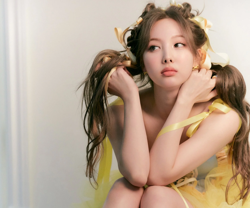