TVB actress Lesley Chiang has had enough of online bullies who attack her incessantly. Chiang went on her Instagram to vent her frustration recently.

“Man, people are really mean sometimes. For anyone who knows me personally, the me on TV and the me in person are pretty much the same. I’m not putting up an act or a front. You don’t even know me. If you don’t like me, just change the channel," the 36-year-old wrote in English.

"I’m so confused why you gotta complain every episode, and take your time to find me on IG just to comment or DM me how you disagree with the way I talk or walk or stand?” Chiang said, referring to a cook show she hosts on TVB.

In 2014, Chiang revealed she was diagnosed with severe depression and had tried to take her own life three times.

The actress, who is the daughter of actor Paul Chun, pleads to the bullies to leave her alone for the sake of her mental health. She said the mean comments left on her social media have been difficult for her.

She wrote: “It’s mental health awareness month. I struggle with depression... Let me live, let me be. If you’re not a fan, just please leave me alone. I’m just a girl chasing her dreams and doing her job. Please stop the cyber bullying.” 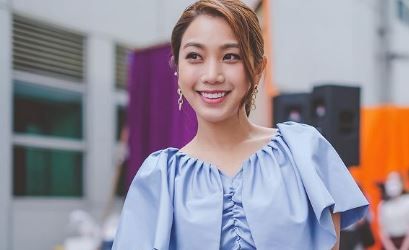 In 2014, Lesley Chiang revealed she was diagnosed with severe depression and had tried to take her own life three times.

Her fans have rallied around her, sending Chiang good vibes on Instagram.

"Love your positive and confidence! Keep fighting, please ignore those who are rude to you," one fan wrote.

Another fan quoted Glee actor Chris Colfer: “When people hurt you over and over, think of them like sandpaper. They may scratch and hurt you a bit, but in the end, you end up polished and they end up useless.”

Chiang thanked her supporters in a post uploaded today (May 18), writing: "I love you all. Thank you thank you thank you all for the love and support recently. You’ve helped me more than you’ll ever know. I’m healing well."

On the career front, things are looking up for Chiang. In January at the TVB Anniversary Awards, Chiang – who joined the station in 2017 – was named Most Improved Female Artiste by the broadcaster.

In March, Chiang shared with fans that she was in Hollywood to shoot her first US project. However, she didn't elaborate on what the project was about.

"My 1st Hollywood role. So grateful for every opportunity that has come my way. How exciting is this?" she captioned a photo of herself at a trailer on a film lot.