Actress Elizabeth Olsen poses for a photo during a photocall for 'Doctor Strange In The Multiverse Of Madness', in Trafalgar Square, London. Photo: AP

Elizabeth Olsen has been playing Wanda Maximoff/Scarlet Witch since her brief appearance in the post-credits scene of the 2014 tentpole Captain America: The Winter Soldier.

Olsen's character debuted more fully a year later in Avengers: Age Of Ultron, which was followed by four more Marvel tentpoles and her Emmy-nominated limited series WandaVision over the next seven years.

All of this time spent in the MCU forced Olsen to miss out on many acting roles that she recently told The New York Times better suited the kind of actor she wanted to be and the kind of movies she loved as an audience member.

"It took me away from the physical ability to do certain jobs that I thought were more aligned with the things I enjoyed as an audience member," Olsen said. "And this is me being the most honest."

One of the movies Olsen was upset to lose because of her commitment to the MCU was Yorgos Lanthimos' The Lobster, which won the jury prize at the 2015 Cannes Film Festival and was Oscar-nominated for original screenplay.

Olsen said at the Deauville American Film Festival in 2015 losing The Lobster was a "heartbreak," adding, "I was in a contract (for Marvel) I could not get out of. So that didn't work out."

"I started to feel frustrated," Olsen told The Times about losing interesting roles because of the MCU.

"I had this job security but I was losing these pieces that I felt were more part of my being. And the further I got away from that, the less I became considered for it."

Olsen has grown more comfortable with the MCU, notably because of her leading turn in WandaVision.

The actor currently is the co-lead of Doctor Strange In The Multiverse Of Madness.

Olsen said that she's grown to love the character so much that she would be open to a standalone Scarlet Witch movie.

"I think I would," Olsen said. "But it really needs to be a good story. I think these films are best when it's not about creating content, but about having a very strong point of view – not because you need to have a three-picture plan." – Reuters 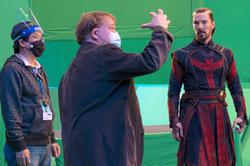