Mat Yeung has had a string of charges relating to drunk driving. Photo: Mat Yeung Ming/Instagram

Mat Yeung Ming's year-long court case stemming from a car accident drew to a close when he was found guilty and sentenced to 18 days in prison on Nov 4. The Hong Kong actor's driving license has also been suspended for two years and he will have to pay a fine of HK$2,000 (RM1,068).

However, Yeung was able to escape jail time by paying the HK$30,000 (RM16,032) cash bail while pending appeal. He would have to remain in Hong Kong and check in with police three times a week.

Yeung was arrested in August 2020 after crashing his car in Mid-Levels, Hong Kong. His car was damaged and found on top of a barrier at the side of the road. Police reported that Yeung reeked of alcohol despite him claiming that he was simply unwell. Police also found that his car windows had been illegally tinted.

It was reported that the actor refused to provide samples for his blood alcohol test which was also a federal offence.

Magistrate Daniel Tang stated that the Only You actor's actions were "extremely careless" and he was lucky that no one had been injured during the accident.

Despite the defense's claim that the 40-year-old had lost more than HK$1mil (RM500,000) due to the ongoing case and has reflected on his mistakes, Tang responded that it doesn't change the fact that the star did not consider his actions before getting in the car. "The court must send a clear message that it will not condone such offences," he emphasised.

Yeung has had a string of charges relating to drunk driving.

Yeung's girlfriend – Hong Kong-based Malaysian actress Lisa Ch'ng – who was in court with him, was seen crying. Yeung did not respond to any questions as he left the court. 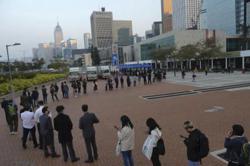