Lee Yeon-hee and her husband got married in June 2020. Photo: Lee Yeon-hee/Instagram

Actress Lee Yeon-hee has kept her relationship mostly private. On the Oct 23 episode of the reality show My Little Old Boy, she opened up about her marriage to her husband who is not a celebrity. The couple married in June 2020.

The 33-year-old actress said during the interview that she knew her husband was the one when she first saw him .. on a blind date.

"Someone set us up. I had never gone on a blind date before but (the person who set us up) suggested, ‘Let’s just all get together and hang out in a relaxing place. Let’s all just grab a meal together',” she shared. Lee said she hit it off with her husband immediately.

The relationship seems to be going well for the Phantom actress, who admitted that they never get into any big fights. She explained: “When I get mad, I’m the type who takes some time to think about it. I don’t say anything right away. Later on, after some time has passed, I’ll say, ‘Honestly, I felt like this'.”

Lee's most recent works include New Year Blues which was released on Feb 10, a love story featuring four different couples during the week leading up to the new year. She starred alongside a stellar cast such as Kim Kang-woo, Yoo In-na, Girls' Generation's Sooyoung and others. The film has a similar vibe to popular American rom-com New Year's Eve. 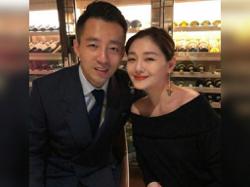