The 3D concept of an alarm clock with the features of the sniper doll from 'Squid Game' has gone viral. Photo: Handout

Fans of the hit South Korean show will be pleased to hear that designers have come up with the idea of bringing the killer doll from Squid Game to life in the form of an alarm clock. This novelty device shoots foam bullets in a concept that has gone completely viral on the internet. Note, however, that this alarm clock doesn't actually exist yet, contrary to what many online sellers claim.

With over 1.8 million views on YouTube and nearly 50,000 likes for a Reel posted on Instagram - it's a level of Internet hype that might not seem so crazy ... until you realise it's all for an alarm clock. But this is not just any alarm clock. And that's exactly why it's been the focus of much online attention these last few days.

The clock in question takes the form of the killer doll that murders a host of contestants in the hit Netflix show Squid Game, in the very first episode. Her voice and her schoolgirl appearance don't stop this doll from becoming a monster when participants in the deadly game break the rules of "red light, green light."

Nevertheless, these features have also seen the doll become a strong symbol of the South Korean drama, watched by more than 130 million people worldwide.

Needless to say, fans have gone wild for this Squid Game alarm clock ... even if it doesn't actually exist yet. The Chilean 3D concept designer, Gaspard 3D, and the film director Nanvo came up with the doll-turned-clock in a post on Instagram.

When the alarm sounds, the character's head lifts up, like in the show, to reveal a weapon that shoots a Nerf-like foam bullet, launched in the direction of the sleeper. And as thoughts start to turn to Holiday gifts, the object is causing something of a stir.

However, the creators behind this idea have made it clear that it is only a concept. So beware of scams! In a Story, they alert Squid Game fans to various online stores using the image of their 3D concept to supposedly sell this alarm clock. Indeed, some sellers are even posting sky-high prices for the gadget - sometimes up to US$150 - and all for an object that doesn't even exist. – AFP Relaxnews 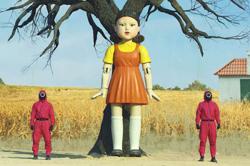