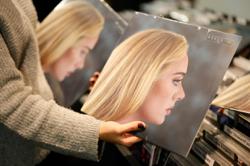 The 'Rolling In The Deep' singer sets the record straight about her motivation for losing weight. Photo: British Vogue/Instagram

Adele isn’t mincing words regarding the fuss about her massive weight loss.

Almost a year and a half after revealing her jaw-dropping body transformation in May 2020, the Oscar, Brit and Grammy Award winner opened up on how hurt and shocked she was by some of the reactions.

She also set the record straight about her motivation.

Contrary to internet scuttlebutt, Adele rejected the idea that she aimed for a “revenge body” after her split from ex-husband Simon Konecki.

“It was because of my anxiety,” the British vocal powerhouse explained to British Vogue.

“Working out, I would just feel better. It was never about losing weight, it was always about becoming strong and giving myself as much time every day without my phone. I got quite addicted to it. I work out two or three times a day.”

“But I needed to get addicted to something to get my mind right,” she furthered. “It could have been knitting, but it wasn’t.”

Unlike other formerly full-figured celebrities, such as Rebel Wilson, who shared their weight loss process on social media, Adele opted not to go that route and kept hers under wraps.

“People are shocked because I didn’t share my ‘journey’. They’re used to people documenting everything on Instagram, and most people in my position would get a big deal with a diet brand.

"I couldn’t give a flying (expletive). I did it for myself and not anyone else,” she said in her first interview since 2016. “So why would I ever share it? I don’t find it fascinating. It’s my body.”

After dropping over 22kg, the Rolling In The Deep singer’s body became a target of so much speculation, criticism and even profiteering.

“You know 100% of the stories written about me have been absolutely fake,” Adele confided.

“No intermittent fasting. Nothing,” she added. “If anything I eat more than I used to because I work out so hard. And also...that whole thing of like, ‘Gets Revenge Body’... Oh my God. (expletive).”

“It’s ridiculous,” the 33-year-old divorcee laughed. “I think it’s that people love to portray a divorced woman as spinning out of control, like, ‘Oh she must be crackers. She must’ve decided she wants to be a ho.’ Because what is a woman without a husband? It’s bulls***.”

Adele’s latest song, Easy On Me will be released Oct 15 with her much anticipated fourth album to follow. – New York Daily News/Tribune News Service

Adele , Singer , Rolling In The Deep