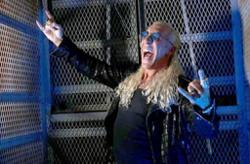 Edgar Ramirez wants people to understand that the fight against Covid-19 is not over. Photo: AP

Edgar Ramírez wants people to understand that although the world is starting to come out of the pandemic, the fight is not yet over.

The Venezuelan actor said that his own family is suffering gravely because of Covid.

"Many families... continue to be affected, including mine in a terrible way,” Ramirez said in a remote interview from Los Angeles.

"At this very moment that I am talking to you, I have family members dying of Covid, so it is very important that we remain alert and attentive to this disease because it has not ended.”

While he did not specify which relatives he was referring to or where they were, he stressed the importance of avoiding fake news, trusting science and getting vaccinated.

"Remember that our grandparents and our parents defeated polio and smallpox with vaccines, and that it is very important to be very careful because in times of fear there is a lot of misinformation,” Ramírez said.

"We need to trust science and follow the recommendations and be very responsible with the way we handle information in times of fear and uncertainty."

Ramírez spoke to the AP while promoting Disney’s upcoming movie Jungle Cruise, in which he plays the villainous Spanish conquistador Aguirre opposite Dwayne Johnson and Emily Blunt.

Jungle Cruise, an adventure movie inspired by the iconic Disneyland theme park ride of the same name, opens on July 30 in the United States.

Ramirez said that being in this film "means a lot” to him because he grew up watching Disney movies.

He also hinted at the possibility of a sequel or new franchise.

"It’s beautiful to be part of the Disney universe in such an iconic movie which we’ll hope becomes the adventures saga of this decade,” he said. – AP