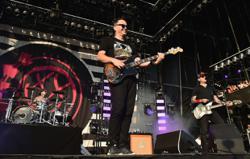 Blink-182 rocker Mark Hoppus offered uplifting news about his battle with cancer, tweeting Monday (July 19) that the “scans indicate that the chemo is working!”

Hoppus, 49, revealed his cancer diagnosis last month, saying he had been undergoing chemotherapy for three months at that point.

In Monday’s Twitter post, Hoppus described the new update about the chemotherapy scans as “the best possible news”.

“I’m so grateful and confused and also sick from last week’s chemo,” Hoppus wrote. “But the poison the doctors pump into me and the kind thoughts and wishes of people around me are destroying this cancer.”

The bassist and singer said he will continue receiving treatment for months, and vowed to “keep fighting”.

Hoppus, a founding member of Blink-182, tweeted in his initial cancer diagnosis announcement that he is “scared” but feels supported by those close to him.

“I’m blessed with incredible doctors and family and friends to get me through this,” he wrote on June 23. “I still have months of treatment ahead of me but I’m trying to remain hopeful and positive. Can’t wait to be cancer free and see you all at a concert in the near future.”

Blink-182, which formed in 1992, is known for hits such as All The Small Things and Adam’s Song. Hoppus is the lone founding member of the Grammy-nominated rock band who is still part of the group. - New York Daily News/Tribune News Service