'OK, I'll stop trying to save every soul we meet if you give up on your My Name Is Earl redemption project, deal?' Photos: Disney Hotstar

Just the thrill of hearing Michael Giacchino's stirring fanfare for the Marvel Studios intro before the start of The Falcon And The Winter Soldier (TFATWS) would have been enough for this unabashed Marvel Zombie to slap a glowing review on this six-episode miniseries.

And by "Blip", I mean the forced changes in lifestyle, mobility and perspective brought on by this awful pandemic which, if anything, have left many of us more cynical, more critical, and less trusting of people, institutions and authority... well, just about everything.

TFATWS has all the hallmarks of a Marvel Cinematic Universe blockbuster and sometimes seems way too large to be confined to the dimensions of a tablet (on which I binged this, since I don't have a "smart" enough TV to run Disney+ Hotstar).

It's a buddy show, has a whole lot of individual arcs, is loaded with action and humour, follows its numerous comic-book sources rather faithfully, and has plenty of visual and musical callbacks to pivotal moments in the Marvel Cinematic Universe.

Familiar characters return (Emily VanCamp's Agent 13, for one, and Miss "Move, or you will be moved" from Civil War), new characters show up (including one who could only be played by Julia Louis-Dreyfus), new locations are introduced (like Madripoor, a wretched hive of scum and villainy known in the comics as a hangout for Wolverine!).

There's a lot in there to please fans, courtesy of series creator Malcolm Spellman (Empire) and his writing team (which includes John Wick creator Derek Kolstad, who pens the show's most shocking episode).

And with just one director (TV veteran Kari Skogland) helming the whole show, there is the polish to be expected of her experience, and a consistency in tone.

Yet with so much in here, TFATWS also stumbles from uneven pacing, strangely placed interludes, and some pretty obvious arbitrary writing that calls its main character's judgment into question.

Set a few months after the events of Avengers: Endgame, TFATWS begins with Sam Wilson (Anthony Mackie), a.k.a. the Falcon, returning the shield bestowed on him by Steve Rogers to the US government.

Working as a free agent to handle cross-border "issues", Sam also has his hands full as a civilian trying to help his sister and her two young sons save the struggling family business.

This raises some interesting questions about whether or not superheroes get paid, and the financial straits of the Wilson family do not really ring true.

Bucky Barnes (Sebastian Stan), the Winter Soldier, is also on his own, attending mandatory therapy sessions as a condition of his pardon (from all the bad stuff he did under Hydra's control).

He has a list of names of people who suffered as a result of his wetwork, and is trying to make amends – not too successfully – one name at a time.

It's a very different world out there in the MCU, with millions displaced by the Blip (first from the Thanos snap and then the Bruce Banner one). 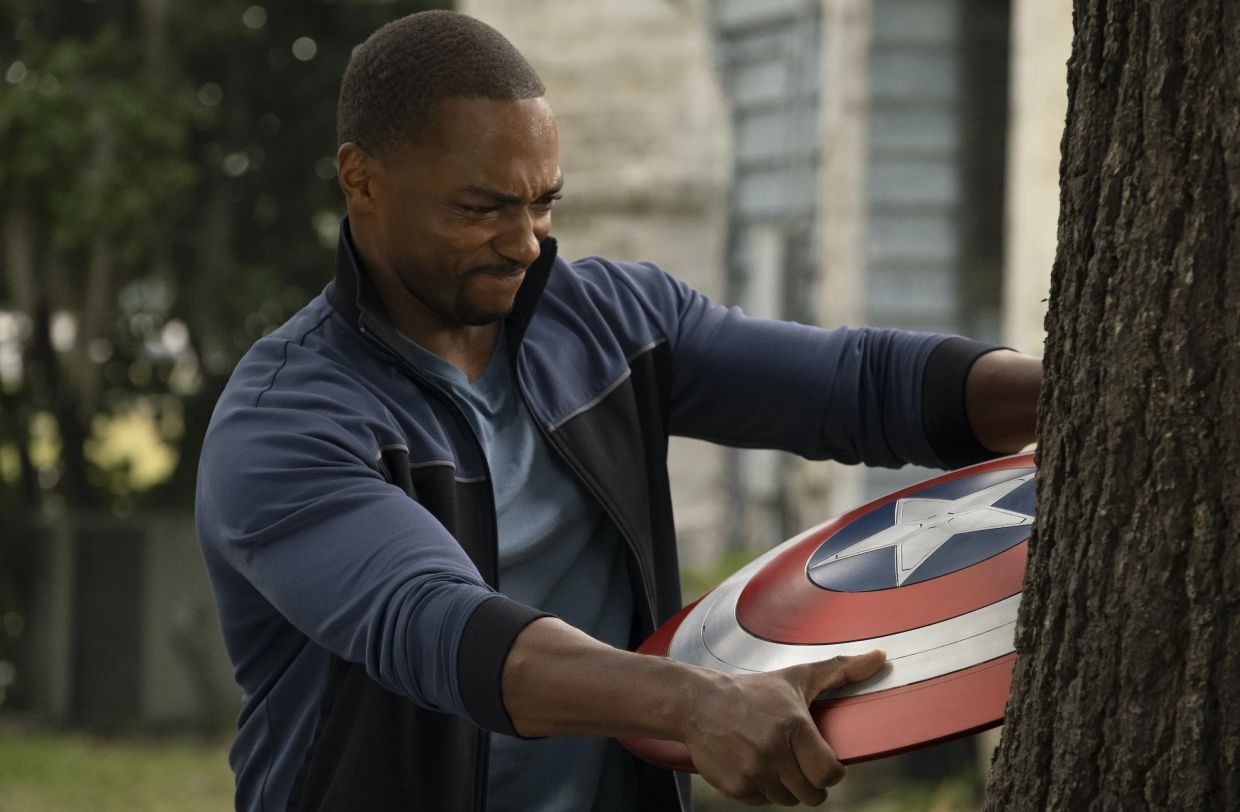 'Sure, this thing has many uses, but logging clearly isn't one of them.'

An international entity known as the Global Repatriation Council has arisen to repatriate those millions, and as is often the case, resorts to "impartial" enactments and military force to do so.

Those affected will not go quietly into resettlement camps, however, and a rebel anti-patriotic organisation known as the Flag Smashers (comic-book root: the Flag-Smasher, a Captain America foe) is carrying out acts of terror to get its message out to the world.

The message: One World, One People, not the worst slogan after someone like Thanos came a-calling.

Not too out of sync with the wobbly orbit of our own broken world either, but the parallels are not drawn clearly enough to matter.

As mentioned earlier, there are a number of arcs here. Aside from Sam and Bucky's, we also have that of Karli Morgenthau (Erin Kellyman), the leader of the Flag Smashers, supposedly struggling with her conscience and having a semblance of... something remaining that makes Sam think she is worth saving.

We'll get to that later. 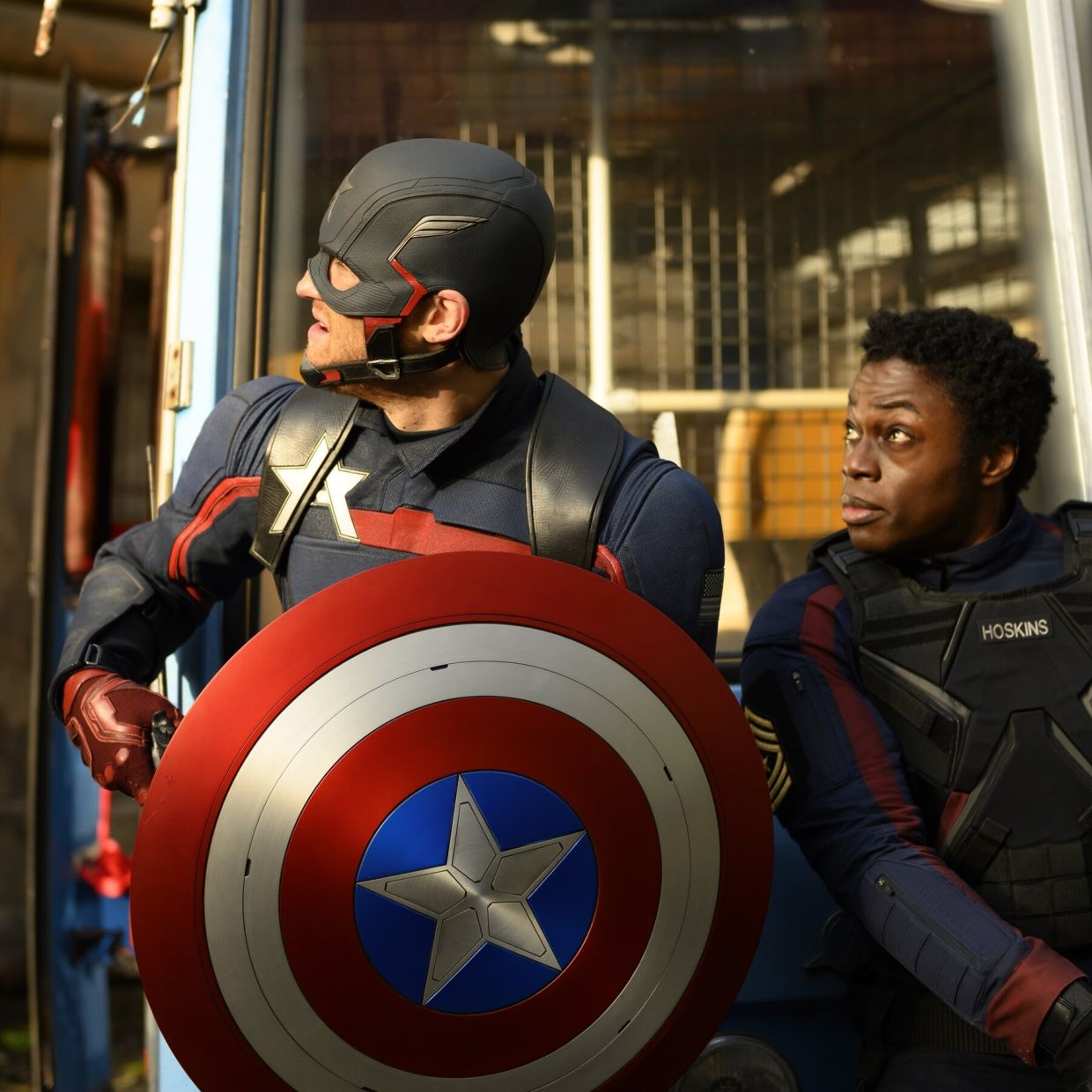 'You know, it's hard to imagine World War 2 was so long ago ... yet costume design hasn't significantly improved since.'

The other main arc involves John Walker (Wyatt Russell), the new Captain America who is chosen by the US government to take up the shield and role.

Like Sam, he has no Super-Soldier serum and relies only on his natural ability and training to get by – and inevitably feels incredible pressure from both his role and the super-powered villains he has to fight.

These four characters' paths intersect, they clash, and for the most part, you can figure what makes them tick and even be somewhat sympathetic towards their respective struggles.

Daniel Bruhl returns as Zemo from Civil War, though his role here is not so much a character arc as it is the juicy chance to play twisted Jiminy Cricket to the major dramatis personae.

Where TFATWS stumbles, though, is in the enormous burden it places on Sam Wilson's shoulders. In addition to his personal struggles, Sam also has to cope with the show's attempt to deal with race politics and his own journey towards becoming worthy of claiming the shield.

"They will never let a Black man be Captain America," one embittered soul tells him at one point, while two white police officers seeing an out-of-costume Sam arguing with Bucky in the street immediately presume the black man is the aggressor.

This is a lot, even in an "extended feature" like TFATWS, and as part of the creative team's perception of Sam's nobility, Karli's redemption sort of becomes his pet side project.

Does every Cap have to save a soul from the brink? It was very different with Steve Rogers and Bucky, though, given their history. Karli is just... some random butcher, to be honest.

'We may be a global insurgency, but we're so cash-strapped we had to borrow our masks from The Hand.'

She is frequently portrayed as a callous murderer ("His life doesn't matter to me," she coldly tells someone whose best friend she just killed), with Sam often witnessing her acts, and thus his determination to "save" her only makes the viewer question his judgment.

Yes, he is stubborn in doing what he thinks is right, but the way the writers manipulate the whole Karli-GRC-Cap-Falcon conflict just makes him look stupidly obstinate.

Still, the joys of TFATWS eventually outweigh its miscalculations and missteps.

The buddy-adventure aspect is fun, thanks to the by-now-familiar chemistry of Mackie and Stan; Russell adds an intriguing, layered and aggressive dynamic to the mix; and some interesting groundwork is laid for wherever Marvel Studios intends to take these characters next.

Just... take those blinkers off Sam, next time.

All six episodes of The Falcon And The Winter Soldier are available on Disney+ Hotstar.

Someone really, really wanted him to carry that shield