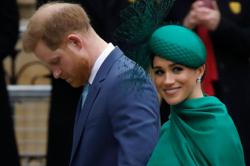 One of the most dramatic claims in Prince Harry and Meghan's interview with Oprah Winfrey was that their son was denied a royal title, possibly because of the colour of his skin. Photo: AP

Meghan, duchess of Sussex, and Prince Harry's interview with Oprah Winfrey has caused reverberations for a second day in Britain, prompting Buckingham Palace to issue a statement saying it was concerned about the race issues the couple raised.

The shocking interview aired in Britain on Monday (March 8) evening after previously airing in the United States the day before.

The programme featured Meghan revealing that she felt suicidal while working as British royal and claiming a royal family member had "discussions" with Prince Harry "over how dark (their son) Archie's skin might be when he was born."

Oprah has since clarified on behalf of the couple that the discussions about Archie's skin colour were not had by Queen Elizabeth II or Prince Philip, Prince Harry's grandparents.

After the programme aired, crisis meetings are said to have taken place at Buckingham Palace, according to the BBC.

The palace then released a statement saying it was concerned about the racial issues the couple discussed.

"The whole family is saddened to learn the full extent of how challenging the last few years have been for Harry and Meghan," said the statement issued on behalf of the Queen.

"The issues raised, particularly that of race, are concerning. While some recollections may vary, they are taken very seriously and will be addressed by the family privately.

"Harry, Meghan and Archie will always be much loved family members."

He told British broadcaster ITV that he "doesn't think" the British royal family or British people are racist.

"I'm guessing and hoping it's just a dumb question from somebody," he said.

"It could just be that simple, it could be somebody asked a stupid question, rather than being a total racist."

Buckingham Palace has not yet commented on the claims.

Thomas – who has had a fractured relationship with Meghan since her marriage to Prince Harry in 2018 – added that her comments about her mental health were "upsetting."

"I love my daughter very much. Had I known she was having psychological problems, I would have been there for her," he said.

Asked about Meghan's suicidal thoughts while she was pregnant with Archie, he said: "It really did upset me... It would have been easy for her to reach out to me."

A peak audience of 12.4 million Britons watched the interview on Monday, according to a spokesperson for broadcaster ITV.

One viewer included British Prime Minister Boris Johnson, whose spokesperson confirmed he watched it during a briefing with journalists on Tuesday.

Prince Harry's father, Prince Charles, meanwhile made an appearance at a vaccine clinic in north-west London on Tuesday.

He is said to have "chuckled" after a reporter asked him what his thoughts were on the interview, according to British press agency PA Media.

In the US, White House press secretary for President Joe Biden, Jen Psaki, said it "took courage" for Meghan to speak about her mental health struggles but declined to comment further as they are "private citizens sharing their own story and their own struggles." – dpa 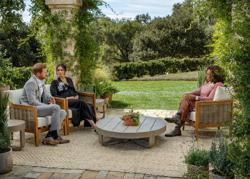