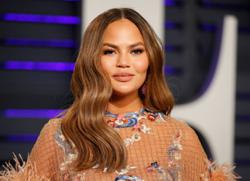 Model Chrissy Teigen has opened up about how the devastating loss of her unborn baby last September has changed her life.

She and her husband, singer John Legend, were supposed to have welcomed their son Jack to the world last week, but she suffered a miscarriage at 20 weeks after a challenging pregnancy.

"I'm still in therapy about it and I'm still coming to terms with it in a way," said Teigen, 35, on a virtual appearance on The Ellen DeGeneres Show on Monday (Feb 8).

She shared heartbreaking details, such as finding maternity clothes and items she had prepared for her eighth and ninth months of pregnancy in her closet.

"You look at those things and you have these constant reminders of him. But being Thai and being raised in a house that was very open about loss, I think it was really helpful," said the mother of two - a daughter, Luna, four, and a son, Miles, two.

She continued: "I see it as, it can be a beautiful thing and it was a really transformative thing for me. In a way, he really saved me because I don't think that I would have discovered therapy and then sobriety and this path of kind of really feeling good about myself and feeling like a new person."

Teigen, who had spoken candidly in the past about her personal life on social media, revealed last December that she will not be able to have any more children and also that she had quit drinking.

In an emotional Instagram post last week on what would have been his due date, she wrote: "I am so full of regret that I didn't look at his face when he was born. I was so scared of seeing him in my nightmares that I forgot about seeing him in my dreams."

She added: "I hurt every day from that remorse. This month is a rough reminder and to be honest, I thought the worst was over but I guess life and emotions aren't on any sort of schedule."

Speaking to DeGeneres, she said: "You really don't know the meaning of the word unimaginable until something like that happens to you.

"Then you think about all the people that go through it in silence and you get really sad for them."

She said: "Ours was so public, so many people were so supportive. But you really gain this incredible amount of empathy. And I really, somehow, think I am a better person now." – The Straits Times/Asia News Network