With a firework display as her backdrop, Katy Perry performed her hit 'Fireworks'.

Pop sensations Lady Gaga and Jennifer Lopez as well as country star Garth Brooks had the honour of performing at the ceremony during the day.

Lady Gaga, the US national anthem

Jennifer Lopez, This Land Is Your Land and America, The Beautiful

Art heals: the symbolism in the Biden inauguration painting by Robert S. Duncanson 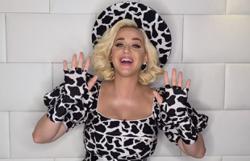