Art heals: the symbolism in the Biden inauguration painting by Robert S. Duncanson

The official “inauguration painting” displayed at a reception inside the US Capitol today came weighted with layered symbolism. The deft choice spoke of a new administration with an insightful understanding of art’s potential power.

Apparently chosen by Jill Biden, the incoming first lady, and Sen. Roy Blunt (R-Mo.) to commemorate the swearing-in ceremony, it was painted in 1859 by prominent Black artist Robert S. Duncanson (1821-1872). The painting is in the collection of the Smithsonian American Art Museum, up the street and around the corner from the Capitol.

Pointedly, it shows an America on the brink of catastrophe.

Golden light illuminates a carefully organised Arcadian landscape at the end of the day. Hills, trees and a shimmering lake are laid out in a subtly dynamic diagonal grid, which reflects the painter’s admiration for the popular French landscape artist Claude Lorrain. A luminous, blue sky caps and almost dominates the peaceful rural scene below.

At the right, an imposing rainbow dips toward a farmhouse nestled in a grove of trees. Cattle, which have been grazing off the land’s abundance, are heading home before sundown. So is a tiny couple, positioned on the path just left of centre. They point toward their destination, spellbound by the shimmery arc of coloured light above.

The scene might be beautiful and serene, but has there been a storm? In 1859, it was coming.

Duncanson, born of a Scottish Canadian father and a Black mother, worked mostly in Cincinnati. He had travelled to France to study art earlier in the decade. Upon his return to America, his work often merged pure landscape with narrative elements associated with metaphorical history painting. 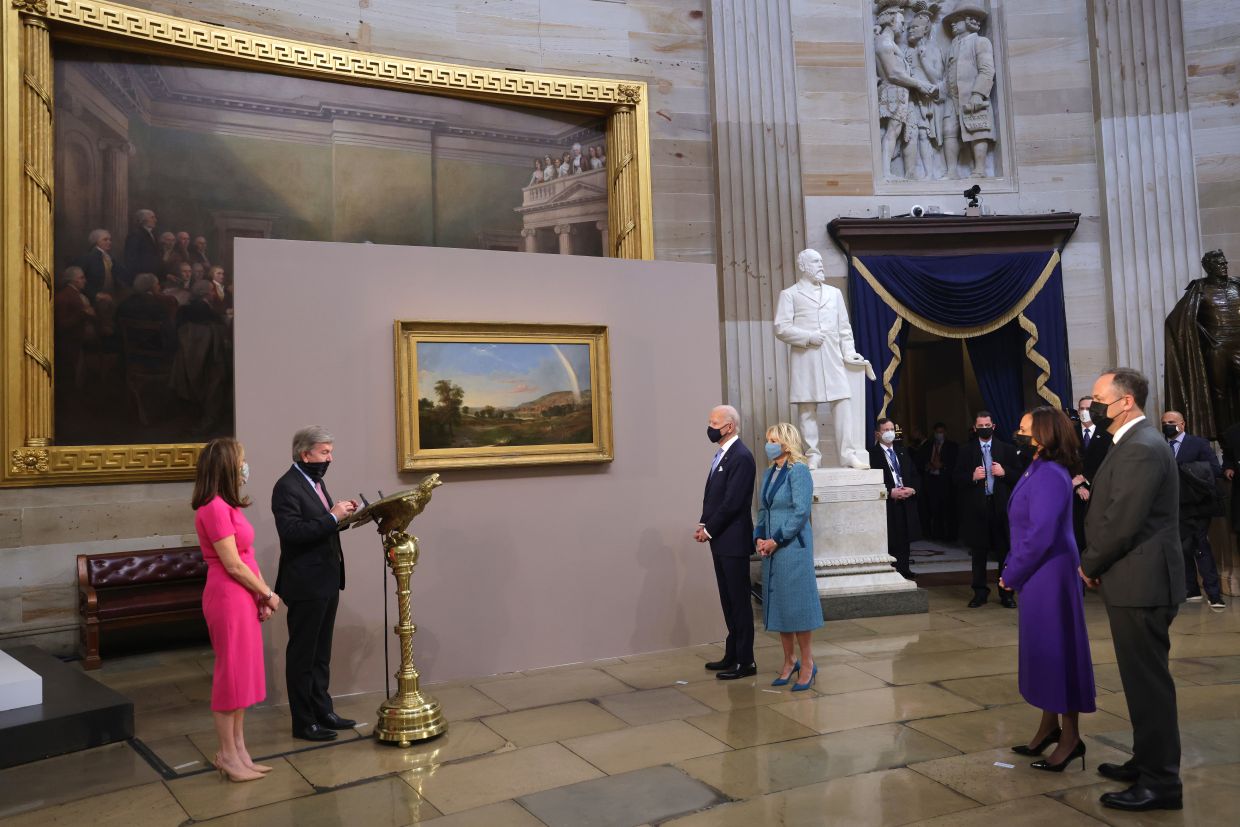 US President Joe Biden and First Lady Jill Biden are presented Duncanson’s 'Landscape With Rainbow' painting from Roy Blunt, Republican from Missouri, left, in the Capitol Rotunda after the 59th presidential inauguration in Washington, D.C. on Jan 20. Photo: Bloomberg

Ohio was a centre of abolitionist fervour. John Brown and his sons, together with a brigade that included seven other Ohioans, made his raid on the then-Virginia village of Harpers Ferry in October 1859 - a failed and bloody effort to initiate a revolt of enslaved people.

Duncanson’s rainbow precedes the brutal devastation of the Civil War that erupted the next year. Landscape With Rainbow is a cautionary image, painted as the seams of American union were being pulled apart. But it carries with it an unmistakable ray of hope: Rainbows typically appear after a storm has passed, not before.

The painting is also likely indebted to the widely known Black spiritual, Mary Don’t You Weep, which dates from before the Civil War. In the biblical story of Mary of Bethany, which relates her plea to Jesus to raise her brother Lazarus from the dead, the song includes a famous chorus invoking God’s covenant to Noah after the Great Flood.

“God gave Noah the rainbow sign; no more water, the fire next time.”

In the US Capitol, the presence of Duncanson’s painting spoke to the stresses of the present as well as those of the past. Two weeks ago, as television cameras rolled and cellphones recorded the scene, Americans saw armed right-wing domestic terrorists smash windows and doors, defile congressional chambers, ransack offices of elected leaders, steal artefacts and documents, wave Confederate flags, display Nazi signs and kill a police officer - all egged on by a president who had decisively lost re-election, but who lied relentlessly that the election had been stolen from him.

The ousted president refused to partake of the essential rituals of a peaceful transfer of power - republican rituals that are a defining feature of American democracy.

As Timothy A. Naftali, a presidential historian at New York University, told The Times, “We’ve never had a president who actively sought to obstruct a transition. And that involved inciting an insurrection.” 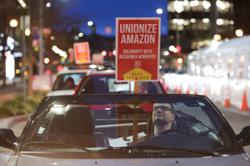