Joe Biden and Kamala Harris showcased American designers at their inauguration Wednesday (Jan 20), and Harris gave a nod to women's suffrage, Shirley Chisholm and her beloved sorority in pearls and purple.

Harris has cited Chisholm, a Democrat from New York, as an inspiration for her career. Chisholm was the first Black woman elected to Congress and the first Black major-party candidate to run for US president.

Pearls had a strong fashion showing, in line with a social media campaign that had inauguration watchers donning strands in support and celebration of Harris. 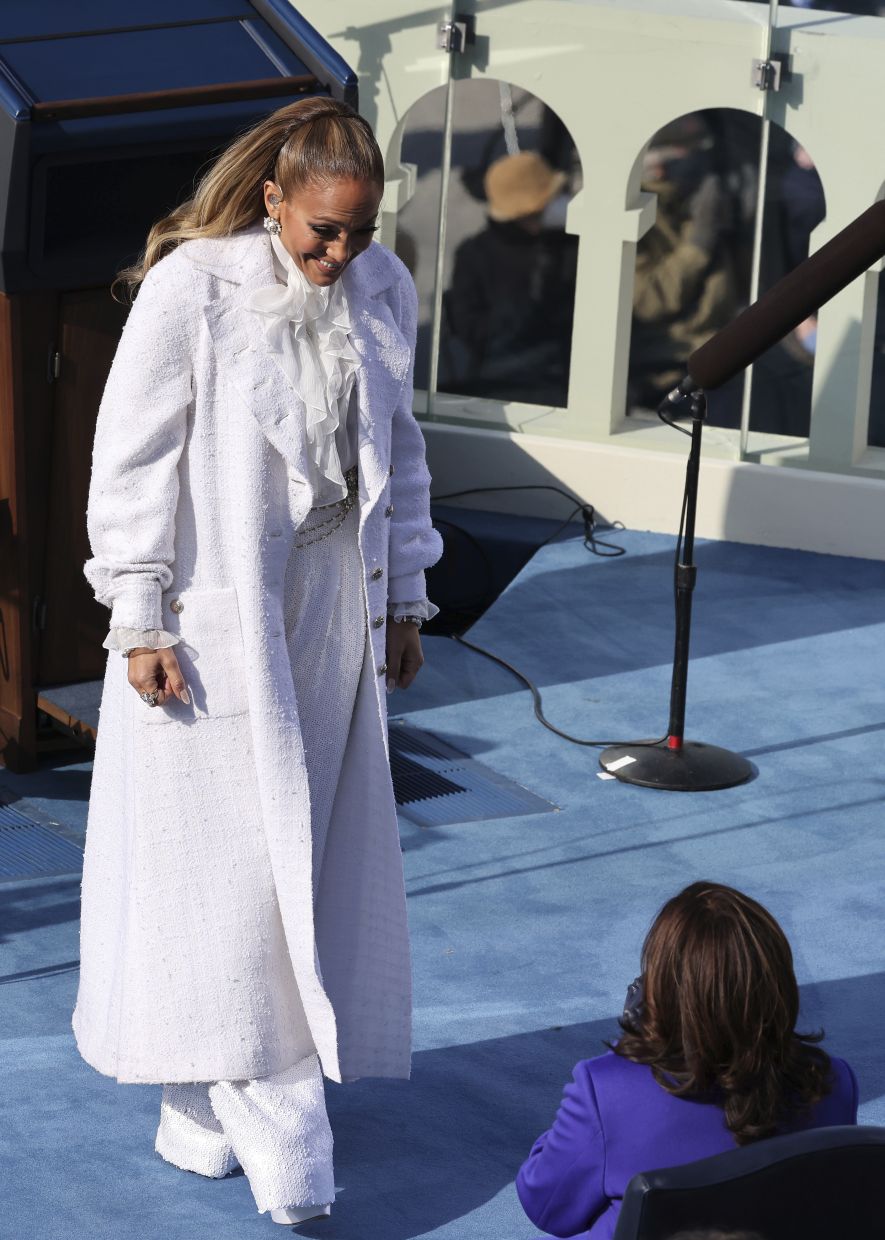 Jennifer Lopez dazzled for her performance. Photo: APNobody in attendance did them quite like Jennifer Lopez – from earrings to bracelets – as she sang This Land is Your Land in head-to-toe white Chanel.

Representative Barbara Lee, a California Democrat, wore a pearl necklace owned by Chisholm herself. It was a gift from Chisholm's goddaughter.

The sorority's founders are referred to as the "Twenty Pearls”. Every new member receives a badge adorned with 20 pearls. Harris attended Howard University, one of the nation's historically Black colleges and universities.

"There’s no doubt that every part of her look today celebrates who she is, where she came from and where she hopes to lead the country. Every piece was carefully considered and packed with meaning, ” Torgerson said.

The look earned him his own inauguration Bobblehead to mark his viral fashion moment. It's now on pre-sale for US$25 (RM101) at the National Bobblehead Hall of Fame and Museum’s online store.

Jill Biden wore an ocean blue wool tweed coat over a dress by American designer Alexandra O’Neill of the Markarian label. The new first lady's matching coat and dress included a velvet collar and cuffs on the coat, and a chiffon bodice and scalloped skirt on the dress.

The neckline of the dress is embellished with Swarovski pearls and crystals. The same crystals adorn the coat. The outfit was handcrafted in New York City.

Aides said Harris was dressed in Christopher John Rogers and Sergio Hudson. Both are Black designers, Rogers from Louisiana and Hudson from South Carolina.

Joe wore a navy blue suit and overcoat by Ralph Lauren. It was a change from Brooks Brothers, the oldest US clothier at 202. The brand has outfitted 41 of the 46 American presidents, including Barack Obama during his inauguration in 2009.

Brooks Brothers fell on hard financial times last year, when it filed for bankruptcy reorganisation and announced a planned sale. 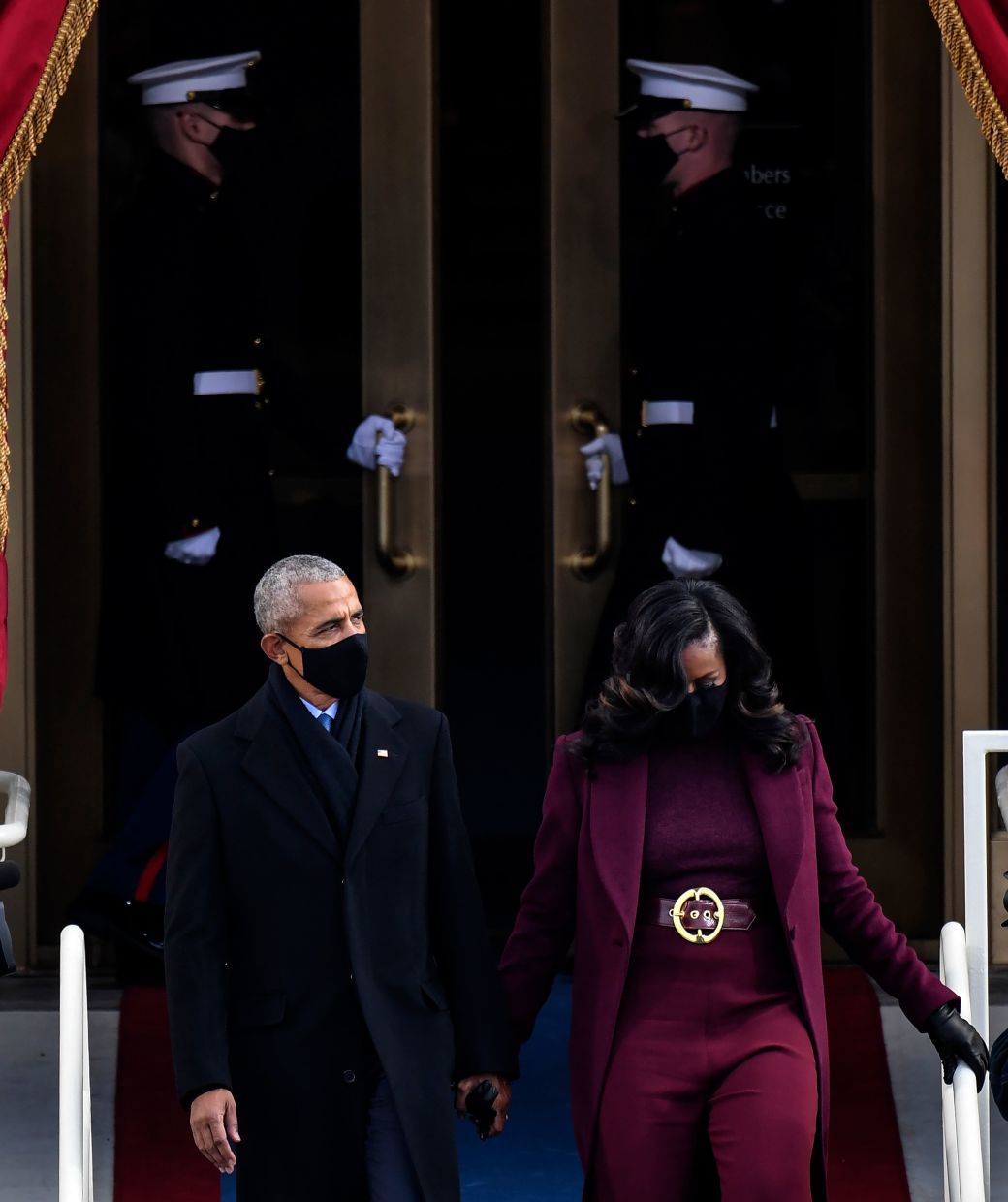 Joe wore Polo shirts, emblazoned with the label’s pony and polo player logo, to take both of his Covid-19 vaccinations on television.

"They chose a diverse group of talents – Christopher John Rogers, Pyer Moss’ Kerby Jean-Raymond, Markarian’s Alexandra O’Neill and Jonathan Cohen – to be a part of this historic moment," she said.

"It made for a meaningful statement at this particular time, when all small businesses, including fashion businesses, are in need of support and spotlighting.”

Harris’ choice to wear pieces by Black designers "felt particularly significant in light of her triply historic title as the first female, Black and Asian American vice president of our country,” Hyland added.

As for the colour purple, it was a symbol of unity and bipartisanship. Republican red and Democratic blue make purple.

"If there’s a message to be taken from today’s inauguration fashion, it’s that those who attended are signaling faith in unity and bipartisanship, as well as restoring truth and trust,” Torgerson said.

Hillary confirmed she wore "purple with a purpose,” saying: "I want to just send a bit of a symbolic message that we need to come together.”

Lady Gaga went for red and let her pin do the talking. She sang the national anthem in a lavish custom Schiaparelli gown designed by Daniel Roseberry with a full red skirt and a navy coat adorned with a humongous gold dove holding an olive branch.

Harris' stepdaughter, Ella Emhoff, schooled some of the older folks in her embellished Shetland Miu Miu coat in a pied de poule pattern with a large brown button at the neck and a pointed collar.

"To put it quite plainly, over the last four years we’ve been starved for fashion choices from the White House that are thoughtful and intentional for the sake of the greater good," said Nikki Ogunnaike, digital director for Harper’s Bazaar. – AP

Will inclusivity be the watchword in fashion for 2021?

Style Watch: Actress Jasmine Suraya Chin shows versatility in dressing up
Would you be recognisable in real life based on your glamorous beauty snaps?
The superwomen of Malaysian fashion and the influence they had on the scene Premium
Burkina Faso designers show there's more to nation than conflict at fashion week
'Jello skin', a new holistic K-beauty trend, is going viral on TikTok
Fashion players will double their investments in tech by 2030, says a new report
How the corset stole the show at this year's Met Gala
Giving yourself a 'sunburnt' look is the latest crazy TikTok beauty trend
As seen at the Met Gala, luxury watches can make a statement on the red carpet
As the hijabi market grows, designers turn their attention to modest activewear Premium