Bollywood actress Priyanka Chopra Jonas, who made a breakthrough in Hollywood, made the cover of British newspaper The Sunday Times on Jan 10.

With the headline ‘The Power Of Priyanka’, the publication highlighted how the 38-year-old Indian star is changing the face of Hollywood.

The article also touched on her marriage to American singer-actor Nick Jonas, who is 10 years younger than her.

When asked whether the age difference is a bigger gap than any cultural differences, Priyanka said neither one was a hurdle.

Priyanka, who married Jonas in December 2018, said: “Nick took to India like a fish to water. But just like a normal couple, you have to understand each other’s habits and what each other likes. So, it's more of an adventure than trying to figure out hurdles. None of it was really that hard.”

She shared with the publication: “It's so comforting to find a person who is in your corner. Whatever I may be in my professional life or how the world perceives me, I'm just a girl trying to live her life in the best way possible, and I'm so grateful to have a partner in doing that."

Western audiences got to know Priyanka – a top star in India – when she made her American television debut in the TV series Quantico which ran from 2015 to 2018.

Since then, Priyanka has been involved in both Indian and American productions. She shared on Instagram on Jan 10 that she had just finished shooting the American romantic feature Text For You.

Prior to going to Britain to film Text For You, she was in Germany filming The Matrix 4.

Next up for Priyanka is The White Tiger – directed by Ramin Bahrani based on Aravind Adiga’s book – scheduled to be out on Jan 22 on Netflix.

Filming in time of Covid-19 is like it was 10 years ago, says local production house 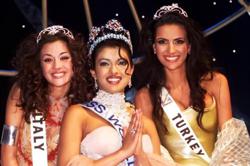