Tom and Jerry are up to their usual shenanigans on the big screen in the upcoming 'Tom And Jerry' movie. Photo: YouTube

Everyone's favourite cat and mouse are taking their antics to New York City.

Warner Bros Pictures has unveiled a trailer for the upcoming Tom And Jerry movie, scheduled for a 2021 theatrical premiere.

While the titular characters are animated in similar styles as the original television show, the new film diverges from tradition with live actors and a real-world set.

Chloe Grace Moretz stars as an event planner hired by a hotel to organise a wedding, but she's also expected to remove a pesky mouse – Jerry – from his recent residence within the building's walls.

Written by Kevin Costello and based on Joseph Barbera and William Hanna's classic characters, Tom And Jerry revives the decades-old rivalry as Tom is enlisted to help remove Jerry from the premises before the date of the wedding arrives.

Cartoon violence ensues as Tom contrives various schemes to sneak up on Jerry, only to fail on numerous occasions.

The two enemies must soon learn to collaborate with Moretz's character, as they realise someone on the hotel's staff is actively working against all three of them.

And with a rivalry 80 years in the making, it's a new step forward for the cat and mouse duo.

The film becomes the latest in a long history of Tom And Jerry projects, with the first shorts dating back to 1940.

To date, there are 164 animated shorts, various television series and multiple movies connected to the Tom And Jerry name. 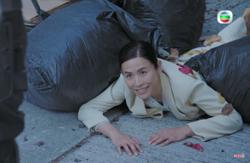