Grammy winner Lizzo triumphed in being the first big, Black woman to be on the cover of Vogue - a good-as-hell career highlight that came just a day after she lamented the Kentucky grand jury decision not to charge any officers in the death of Breonna Taylor.

"I am the first big black woman on the cover of @voguemagazine. The first black anything feels overdue. But our time has come. To all my black girls, if someone like you hasn't done it yet - BE THE FIRST," she wrote Thursday (Sept 24) of the fashion bible's October cover.

The directive seemed to be a rebound from her grief Wednesday, illustrating the exhausting resilience often expected of Black women in the framework of systemic racism.

"This is the blackest and brownest @voguemagazine ever - and I have to brag," the 32-year-old musician added.

Lizzo's Instagram account on Wednesday and Thursday was a mixed bag of emotions between her striking Vogue spread shot by Hype Williams and her sombre Instagram stories expressing grief over the Taylor decision.

‘Early in her career, Lizzo says, she was told by music-industry executives, “You can’t go white to Black. But you can go from Black to white.” Her response: “‘Well, I’m a Black woman. So I can do just about anything I want to do.’ How dare these people sit up and tell me who my music is going to appeal to or not?”... “When I go hiking or whatever,” Lizzo tells me, “it’s Black girls being like, ‘I like your music.’ ‘Hey, that’s Lizzo.’” These Black fans confirm for Lizzo what she already knows, that she’s “a Black woman making music from a Black experience”—and that her message can speak to anyone.’ - @voguemagazine story by Claudia Rankine. Link in bio.

"I'm so disappointed and unfortunately not surprised in the way none of the officers have been charged with the murder of Breonna Taylor," the Truth Hurts singer said Wednesday in candid videos on her stories.

"Take everything out, take all the details out and tell somebody that this man (Officer Myles Cosgrove) broke into a woman's home and shot her to death while she was sleeping. Oh, and he wasn't charged for murder. Does that sound fair to you? It doesn't sound fair to me. No justice, no peace."

Lizzo joined the droves of celebrities and athletes who decried the Louisville, Kentucky, grand-jury decision to charge ex-Louisville Metro Police Department detective Brett Hankison with three counts of wanton endangerment for shooting into neighboring apartments in connection to the March 13 police raid of Taylor's home. The decision provoked protests in Kentucky and in Los Angeles.

The body-positive singer and flutist shared a portrait of Taylor on her Instagram account Wednesday, invoking fans to "SAY HER NAME. Breonna Taylor." She also urged followers to donate to the Louisville community bail fund.

This is the blackest and brownest @voguemagazine ever - and I have to brag.. shot by THEE @hypewilliams Styled by @mr_carlos_nazario Hair by @theshelbyswain Makeup by @iwantalexx Wearing @laquan_smith Story by Claudia Rankine. It don’t get no betta. Thank you Anna.

Though her Vogue interview was conducted well before Wednesday's decision, it came amid the national reckoning over race and injustice that has consumed the United States during the Covid-19 pandemic and since the death of George Floyd.

In the interview, Lizzo - an artiste who has weaponised her uniqueness - still talked about Taylor and what it means to be a Black woman in the US with contributor Claudia Rankine. The discussion ranged from body image, to music, to Aretha Franklin, to her time living in Minneapolis where Floyd was killed. She touched on her unlikely "crossover appeal" and success and her thoughts of having Sen. Kamala Harris (D-Calif.) be the first Black, female US vice president if Democrat Joe Biden prevails in the November presidential election.

"Having a Black woman as vice president would be great," Lizzo told the magazine, "because I'm just always rooting for Black people. But I want actual change to happen ... in the laws. And not just on the outside, you know? Not a temporary fix to a deep-rooted, systemic issue."

She added: "A lot of times I feel like we get distracted by the veneer of things. If things appear to be better, but they're not actually better, we lose our sense of protest," she said, making sure to mention Taylor, Sandra Bland and the women who often get dropped from the conversation.

"We need to talk about the women."

“Having a Black woman as vice president would be great,” Lizzo says, “because I’m just always rooting for Black people. But I want actual change to happen...in the laws. And not just on the outside, you know? Not a temporary fix to a deep-rooted, systemic issue. A lot of times I feel like we get distracted by the veneer of things. If things appear to be better, but they’re not actually better, we lose our sense of protest.” She makes sure to mention Breonna Taylor and Sandra Bland and all the women who, inadvertently or not, often get dropped from the conversation: “We need to talk about the women.” - @voguemagazine story by Claudia Rankine. Link in bio.

Lizzo, whose real name is Melissa Viviane Jefferson, said that she just wants to encourage people to register to vote, especially upset people "who have power".

"There's a lot of voter suppression in Black communities. But there's a lot of angry white kids now. And I'm like, 'Yo, register to vote. Go out. You won't get suppressed if you try to go to your ballot box.' You know?" she told the magazine.

"I think it's important to remind people of what they can do. My job isn't to tell you how to vote. But my job is hopefully to inspire you to vote... to activate you, so that you can take your protest to the ballot box." – Los Angeles Times/Tribune News Service 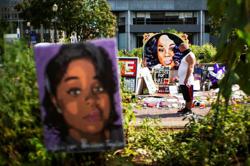