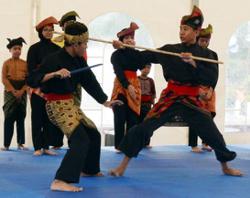 The movie revolves around a martial arts family having to defend its land. Photo: Layar Pictures

Martial arts action movie Geran, produced by Layar Pictures and Tree of Hopes Productions, has been named the recipient of the Daniel A. Craft Award at the 19th New York Asian Film Festival (NYAFF) for excellence in action cinema.

EasternKicks.com, which is also the official media of NYAFF, reported that the victory meant Geran director Areel Abu Bakar and action choreographer Azlan Komeng joined the ranks of Dante Lam for Operation Red Sea, Yue Song (The Bodyguard) and Jung Byung-gil (The Villainess), who had previously won the action film excellence award.

The film Geran, which elevates the 'Gayong Pusaka' martial arts with the theme of family and brotherhood, features, among others, actors Namron, Khoharullah Majid, Feina Tajuddin, Fad Anuar, Azlan Komeng and Megat Shahrizal.

When contacted, Areel described the award as an appreciation of the film's production crew and fans in helping to raise the martial arts and culture of the Malaysian community to the world.

"We never expected to receive outside recognition. This is the first award received for the movie Geran, which is also my first film," he said, adding that the NYAFF informed him of the good news on Aug 17.

Having been screened in cinemas in Malaysia and Brunei on Oct 10, 2019, Geran was filmed using the producers’ own budget.

The movie revolves around a martial arts family having to defend its land and home after a family member runs away with the land title grant and mortgages it to a loan shark.

The movie also features real martial arts exponents, who choreographed their own stunts. The NYAFF, which will air online through the Smart Cinema app from Aug 28 to Sept 12, is a prestigious film festival in the United States aimed at elevating the development of arts and culture through the world cinema network.

It is also a platform for the screening and appreciation of films through the selection of contemporary and classic films from Asian countries. – Bernama