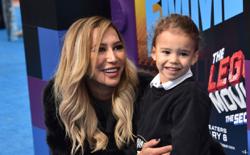 Zyrus played an exchange student from the Philippines, Sunshine Corazon, in multiple episodes on the second season of the musical comedy-drama in 2010.

"She was very kind to me. She was very reserved, but she made me feel welcomed," the 28-year-old talks about Naya in an interview with the Philippine Daily Inquirer.

"We have lost another great talent indeed."

Naya's body was found dead at Lake Piru, California on July 13. She was 33.

The late actress had rented a boat and gone for a swim with her four-year-old son, Josey. He was found safe on the boat but Naya did not make it.

Ventura County Sheriff Bill Ayub concluded their investigation: "She mustered enough energy to get her son back onto the boat, but not enough to save herself."