By MUMTAJ BEGUM and GORDON KHO

Films 'Tenet' and 'Mulan' are set to open at cinemas nationwide on July 30 and July 23 respectively.

Today (June 22), the government announced that cinemas can resume operations beginning July 1, with a couple of conditions in place.

Datuk Seri Ismail Sabri Yaakob, the Senior Minister (Security), said during a press conference that the number of attendees should not be more than 250 people at one time, depending on the capacity of the hall.

He also said, the standard operating procedures (SOP) like temperature checks, social distancing, wearing face mask and hand washing, must be observed at all times at these premises.

“I am excited that the cinema is opening because this will bring us back to some normalcy during this period of time. With social distancing and all sanitisation precautions taken, I think we will be good to go if we take care of ourselves and be smart and more careful when we are out, ” movie fan Phui Ying said.

Sani Abdullah said that he is elated with the news of cinemas being allowed to operate again. "After barbers are allowed to resume business, the next thing that I was keeping my fingers crossed for is for cinemas to reopen. While streaming shows at home is an option, nothing beats seeing a movie in a cinema setting."

College student Lena Khoo misses the social aspect of going to the movies with friends. Khoo understands the need to social distance even in the cinema halls.

"I can't wait to watch movies with my friends when cinemas reopen. We will follow the rules that the cinema operators will lay out. It's no big deal. I am already doing all the 'new normal' stuff at supermarkets and restaurants," Khoo said

With this announcement too, film exhibitors can breathe a sigh of relief as the industry has been under considerable financial strain due to zero activity. But they also understand the level of responsibility it comes in the new normal climate. 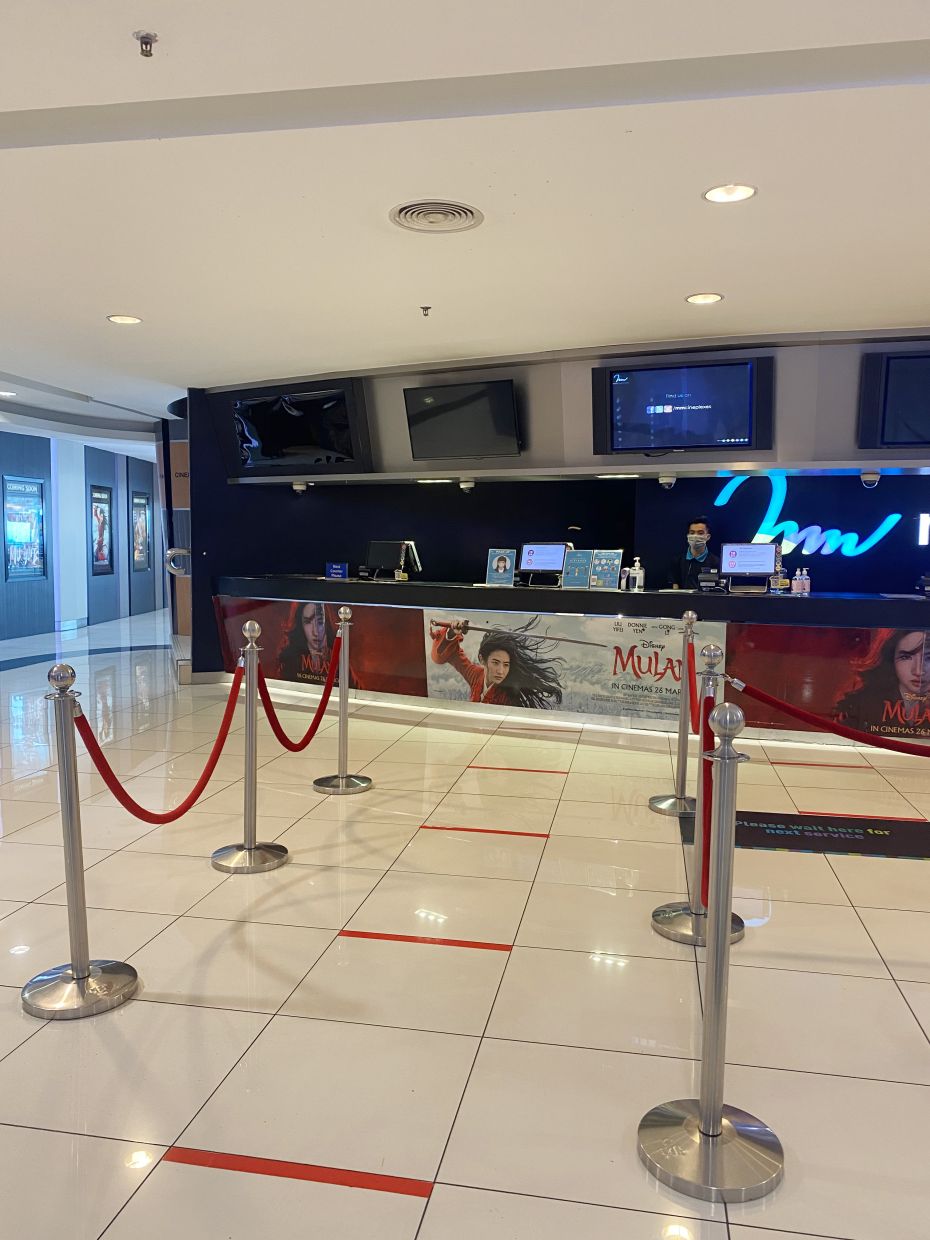 Safety distancing markers will be indicated at the premise. Photo: mmCineplexesJason Teo, the director of marketing and business development with mmCineplexes, said: “Our audiences’ comfort and safety are our top priority.

"We do expect some customers may take a longer time to decide when to visit (cinemas), but some – who miss going to the cinema to watch a good movie – will return to their favourite pastime.”

He added: “We are confident movie-going will be back to normal... (with) both cinema operators and customers cooperating to ensure that the cinema is a safe place to go to consume good movies. We look forward to entertaining our fans again.”

Since cinemas were shuttered in March, members of the Malaysian Association of Film Exhibitors (MAFE) – consisting of cinema operators Golden Screen Cinemas (GSC), TGV Cinemas, mmCineplexes and Lotus Five Star Cinemas, MBO Cinemas – have been in meetings with National Film Development Corporation (Finas) Malaysia figuring out how to start operating again once given the greenlight.

Likewise, Finas has been in communications with Health Ministry (MOH) and National Security Council (MKN) about the SOP for cinema-goers. Hand sanitiser and safety instruction notice will be placed at the box office counter. Photo: mmCineplexesWhile the official SOP for film exhibitors is not out yet, the cinema operators have their own checklist.

Koh Mei Lee, the CEO of GSC, shared: “Upon opening, we will ensure that our operations are focused on improved safety measures to safeguard our customers’ health and well-being.”

According to Koh, this will include implementation of:

- Temperature checks on employees and movie-goers;

- Enhanced cleaning and regular sanitisation of frequently used facilities, as well as disinfection of seats after every screening;

- Practise of social distancing in the halls with gap seating.

- Provision of hand sanitisers at various check points, such as ticketing and concession counters.

She added: “All our staff will also be required to wear face masks as part of daily operations and movie-goers will be strongly encouraged to wear one as well.

“For the common area, we will also be controlling the number of people to prevent crowding. During this time, cinema-goers are also encouraged to purchase their movie tickets online as a social distancing measure to avoid queuing.”

With cleaning and disinfecting of their premises on-going since the start of MCO, film exhibitors are more than ready to start operating again next month. 'Wonder Woman 1984' is set to open on Oct 1. Photo: Warner BrosBut there is still the major concern, which is the availability of content that is minimal till the end of July.

Only two Hollywood movies are confirmed on July’s list as of now – the live-action flick Mulan (July 23), and Christopher Nolan’s Tenet (July 30).

Most international films are scheduled to kickstart from August timetable onward.

Meanwhile, local films’ release dates are still in limbo. When contacted last week, Finas said it is looking at rescheduling more than 20 films, some of which might spill over to next year.

For now, one plan to welcome back movie-goers is to have re-runs of old Hollywood titles and Asian movies at a discounted price. Titles such as Bloodshot and Ip Man 4: The Finale. The list may also include March releases that were affected by the MCO.