The 40-year-old revealed the baby's gender in her Instagram post on Monday (March 30) with the hashtag #mylittleprincess.

Hong Kong actress Tavia Yeung is expecting a baby girl. The 40-year-old revealed the baby's gender in her Instagram post on Monday (March 30) with the hashtag #mylittleprincess. She wrote: "People say that pregnant women are the most beautiful, I guess that's because they radiate a glow that only comes with nurturing a life."

A series of photos showing off her baby bump were also posted, along with the caption "little baby is coming".

Her post has garnered more than 90,000 likes, with fans and friends expressing their congratulations and well wishes.

The actress first announced her pregnancy on Instagram in February, when she posted a photo of herself and her husband of four years, actor Him Law, using their fingers to form heart shapes near their tummies. "There will be a little light bulb between us," she had said then.

Yeung is known for acting in TVB dramas such as Beyond The Realm Of Conscience (2009) and The Mysteries Of Love (2010). She married Law in 2016 after they dated while acting in the medical drama The Hippocratic Crush (2012). – The St 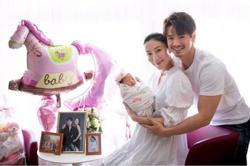