Cecilia Cheung took her three sons for a holiday in Koh Samui, but a flight attendant at the airport told Cheung to get off the plane which was bound for Hong Kong. Photo: Instagram/Cecilia_Pakchi_Chueng

Hong Kong actress Cecilia Cheung's recent vacation to Thailand was marred at the end when her family were ejected from a plane back to Hong Kong.

In late February, Cheung, 39, took her three sons for a holiday in Koh Samui, together with her younger brother Ronnie Cheung's family. They boarded a plane home on Monday evening (March 9).

A fellow passenger identified only as Kam told Hong Kong newspaper Apple Daily that Cheung and her family were among the first to board the plane.

A video provided by Kam to the newspaper shows Cheung, who was wearing a black face mask, standing in the aisle and carrying her one-year-old son Marcus. The actress, who rose to fame in director Stephen Chow's movie King Of Comedy (1999), seemed to be trying to coax the toddler to sleep.

As the aisle was quite narrow, Cheung blocked the way. A flight attendant then asked her to sit.

"Cheung did not seem to block the aisle intentionally, but her actions were slowed down by the child when the attendant asked her to return to the seat quickly," said Kam. "But she sounded a bit agitated while talking to the attendant when I passed by them."

It later escalated into an argument and the attendant told Cheung loudly to get off the plane. Several security personnel were also seen in the plane later.

The standoff lasted for less than an hour, said Kam. It also led to unhappiness among the passengers and other crew members, as it caused the flight to be delayed.

The flight, which was scheduled to leave at 5.25pm, took off at about 6pm.

Cheung made no mention of the incident on her Instagram. On Tuesday, she posted a video of Lucas and Quintus playing in a hotel room.

Marcus was born in November 2018, but Cheung has not revealed who the father is. The father of her two other sons - Lucas, 12, and Quintus, nine - is her ex-husband, Hong Kong actor Nicholas Tse. – The Straits Times/Asia News Network 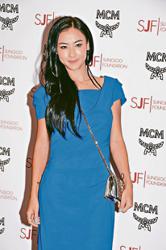