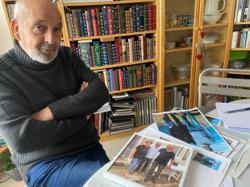 Rushdie, now a naturalised US citizen, confirmed on Twitter that the magazine 'The New Yorker' has published an extract from his new novel 'Victory City'. Photo: AP

The author Salman Rushdie released excerpts of a new novel on Monday, four months after he was severely injured in a stabbing attack in the state of New York.

The New Yorker magazine published an excerpt online entitled "A Sackful of Seeds" from the 15th novel by Rushdie, titled Victory City, which is due to be published in early February by Penguin Random House.

The book tells the "epic tale" of a woman in the 14th century in what is now part of India, the publishing house said.

The New Yorker said this excerpt will be published in its print edition dated Dec 12 and due out for sale on Monday.

Rushdie, a Briton born in India, confirmed on Twitter that the magazine has published an extract from Victory City.

It was the first time since Aug 9 that Rushdie posted something on Twitter. He did so then to announce that his next book would come out in February 2023.

Three days later, while Rushdie was on stage preparing to give a lecture in Chautauqua, New York, a young man ran up and stabbed him repeatedly.

The 75-year-old writer, who had received death threats after the publication of his The Satanic Verses in 1988, was stabbed several times in the neck and abdomen.

Rushdie was airlifted to a nearby hospital for emergency surgery but ultimately lost his vision in one eye and the use of one hand, his agent Andrew Wylie said in October.

The author had lived in hiding for years after Iran's first supreme leader Ayatollah Ruhollah Khomeini ordered his killing for what he deemed the blasphemous nature of The Satanic Verses.

The suspect in the stabbing, Hadi Matar, a 24-year-old from New Jersey with roots in Lebanon, was arrested immediately after the attack and subsequently pleaded not guilty to the charges.

The attack sparked outrage in the West but was praised by extremists in Muslim countries like Iran and Pakistan.

Rushdie is now a naturalised US citizen and has lived in New York for 20 years.

Iran denied any involvement in the stabbing attack against Rushdie. - AFP