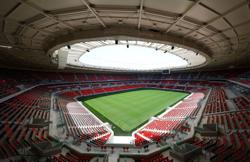 A cartoon series on an alien who crash-lands in World Cup host Qatar aims to ease a culture clash between more than a million foreign football fans and the conservative state's residents.

Like the arriving fans, Kawkabani, star of the series launched by Qatar's first animation studio, has to learn Arabic pronunciation, how to drink coffee - and to discover that Qataris prepare way too much food for their guests.