Saiful Razman's pandemic-themed artwork titled 'Walk In Silence, Don't Walk Away In Silence' was announced as the 2021 UOB Painting of the Year (Malaysia) award winner in an online ceremony on Oct 25. Photo: Handout

Award-winning contemporary artist Saiful Razman has added another accolade to his name when his pandemic-themed artwork titled Walk In Silence, Don't Walk Away In Silence was announced as the 2021 UOB Painting of the Year (Malaysia) award winner in an online ceremony on Oct 25.

Razman, 41, received a prize of RM100,000 and now stands a chance to win a one-month residency programme at either the renowned Fukuoka Asian Art Museum in Japan or the UOB Art Gallery in Shanghai, China next year.

His painting will compete with other winning entries from Indonesia, Singapore and Thailand for the 2021 UOB South-East Asian Painting of the Year award, which will be announced at a virtual award ceremony on Nov 26.

The Teluk Intan, Perak-born artist, who was the joint-winner of the National Art Gallery’s Bakat Muda Sezaman (2016) grand prize, is no stranger to mixed media work.

As an established name in the Kuala Lumpur art scene, Razman has embraced a minimalist approach to art, working with material such as gauzes and tissues since 2015. Through the years, he has produced a series of abstract pieces and monochromatic landscapes to intrigue viewers. These works exhibited at galleries and institutions have seen the artist constantly creating a mindful space for art and contemplation.

Walk In Silence, Don’t Walk Away In Silence, which uses tissue paper and gauze to create ethereal, opaque and tonal layers, is a standalone work by Razman that was done on-and-off during the various lockdowns in the past two years.

“It is a new work that I decided to submit for this competition, but it also has links to my last solo show in Singapore (Future Love at Chan + Hori Contemporary in 2019), which reflected on the ideas of a house and a home... perhaps, a meditation on architecture, how we design our lives and where we belong, if you want to delve deeper," says Razman. 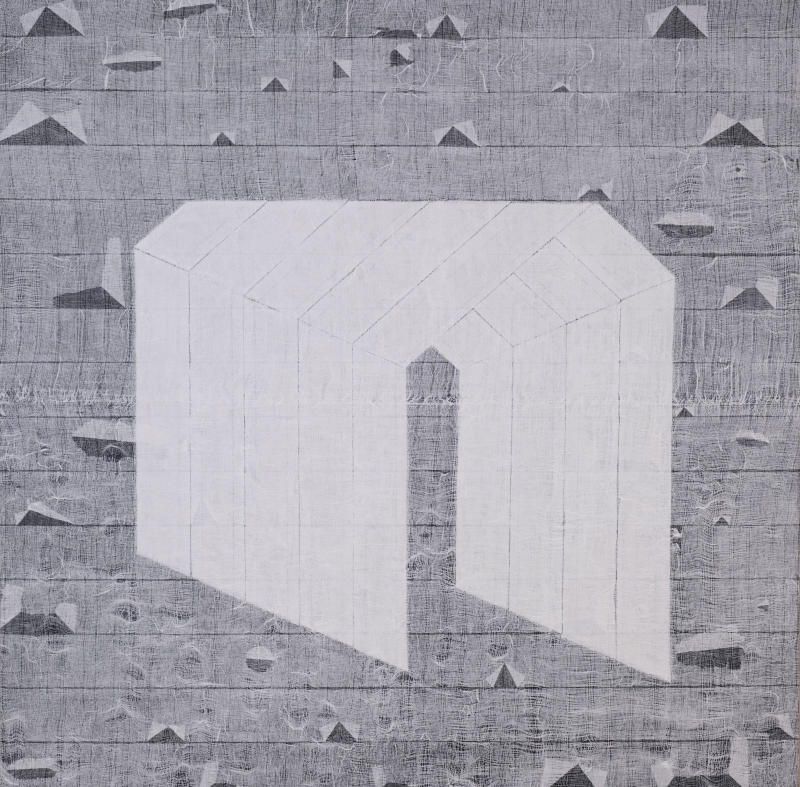 His prize-winning piece, he mentions, was one of the many works he created over the last two years despite not been active on the exhibition front.

“I didn’t have (solo) exhibitions during the pandemic but I didn’t stop making art. I just kept busy during the most difficult periods of the pandemic, (creating) art was a constant solace in all those uncertain months, which seemed endless. Things are still uncertain now, but we must not lose hope. I'm thankful that I can still continue with art.

“Walk In Silence, Don’t Walk Away In Silence, as an extension of my previous theme of ‘home’, channels the pandemic experience... it's about people adjusting to long periods at home... a house as a safe space, then perhaps a 'cage'. In reality, so many of us are hoping for a way out, a safe way back to normality,” he explains.

The title of the artwork also references lyrics from British post punk group Joy Division’s song Atmosphere, which inspired Razman to reflect on the contradictions in life.

"It's a good lyric, with a theme and a mood and a feeling to it. Just like art, music has the power to transcend boundaries.

“Music is a constant companion in my studio process and this pandemic has given me a lot more time to listen more deeply... in fact, I have discovered new things from the most familiar albums I have been listening to all my life,” says Razman, who also reveals that he has a small exhibition coming up this December in Kuala Lumpur.

“There is always a mix of anxiety and excitement in putting out a new show. I think during these post-pandemic days, you can add relief, or release, to the equation,” he adds.

"Despite the current challenges, we saw many talented artists continue to persevere and to rise to the occasion by taking experiences from the pandemic as a source of inspiration for their works. The quality and mastery of the winning artworks tell a multitude of stories, including those of hope, strength, resilience and overcoming adversity. We are pleased to have received yet another year of record entries from both established and emerging artists from across the country," says Wong Kim Choong, Chief Executive Officer, UOB Malaysia.

In the Emerging Artist Category, Jaclyn Teh Ya Zi won the Most Promising Artist of the Year award for her artwork titled Hi.