Muzium Negara is highlighting the Chetti community's story in Melaka in a virtual exhibition tour.

The Chettis are regarded as the first and oldest Peranakan community in Malaysia, and viewers can now discover more about them through The Faces Of Malaysia Exhibition: The Chettis Of Melaka, which runs until Nov 16.

In Melaka, the Chettis, sometimes called Peranakan Indians, can trace their roots back to the 15th century when South Indian traders arrived in the historical South-East Asian trading port, married local women and settled down here.

Through a rich history spanning over 600 years, the Chetti community is characterised by intermarriages, cultural assimilation and unique Hindu practices. The community speaks a unique combination of Bahasa Malaysia, Tamil and Chinese.

"The Chettis Of Melaka exhibition aims to highlight the uniqueness of the Chetti belief systems and language as well as expose the public to the sustainability of the Chettis as one of the ethnic minorities in Malaysia," reads a Muzium Negara statement. The exhibition is divided into four main sections, each concentrating on different aspects of Chetti community life and history. Photo: Handout

As a living heritage site, Kampung Chetti in Melaka is home to no more than 25 Chetti households.

Nationwide Chetti population numbers are estimated to be around 350.

From a beautiful wedding dais decoration set up to musical instruments, photographs and even a short pantun recital video by a Chetti matriarch, Muzium Negara's The Chettis Of Melaka online exhibit gives viewers a glimpse into the origins, history and culture of the Chetti community. The exhibition is divided into four main sections, each concentrating on different aspects of the Chetti story. 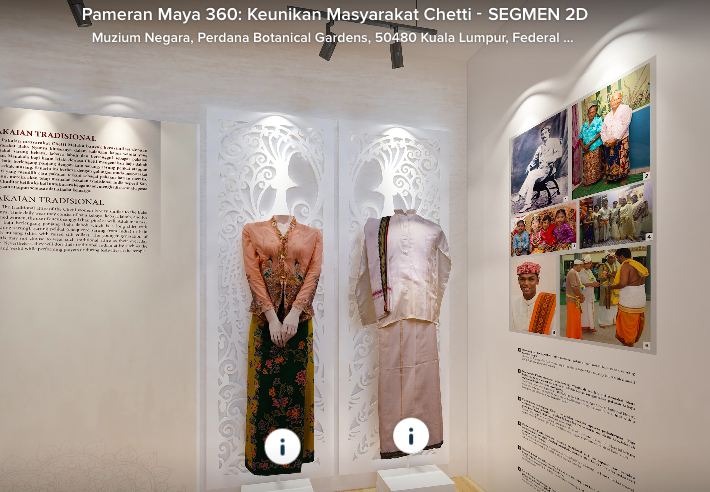 A screen shot of the Chetti ceremonial dress section in the 'The Chettis Of Melaka’ virtual tour.

Get to know the history of the Chetti community in the first section, which features photographs, articles and artefacts such as a copper peacock (a common decorative item in Chetti households), traditional Chetti headgear and a white pith helmet (colonial-era hat) that once belonged to one of the trustees of the Sri Poyatha Vinayaga Moorthy Temple when he was an officer during the British administration in Melaka.

In the next section, find out about the Chetti birth rites, death rituals, the sadanggu ceremony (observed to mark a girl’s coming of age), traditional clothes, Chetti kitchen, wedding rites and percussion instruments played during wedding and cultural ceremonies such as the tabla, baya and mridangam.

The exhibition is rounded off with sections focusing on Chetti religious beliefs, language and today's efforts in preserving Chetti community culture and heritage.