Actors Faiq Syazwan Kuhiri (left) and Anne James in a scene of 'Baling', a documentary theatre shown by Five Arts Centre at its then new-opened Kotak space in April 2016. Photo: Wong Horng Yih

When one door closes, another opens.

It was a series of bittersweet farewells late last month as theatre collective Five Arts Centre moved out of its two-storey arts space and office in a Taman Tun Dr Ismail (TTDI) shoplot in Kuala Lumpur.

The space was home to Five Arts Centre for 23 years, prompting online tributes from the local arts community.

The theatre collective, known for its thought-provoking, experimental and intercultural works, will start a new chapter come next April at the GMBB mall in KL.

“We’re excited to be in the city!” said June Tan, a producer at Five Arts Centre.

“But first, we’ll need to raise money to renovate the new space. We definitely will need some help there,” she added.

Playwright/academician Leow Puay Tin’s show Family was the first production that rehearsed at this venue in 1998. Venues in KL such as Experimental Theatre (now Aswara), Panggung Bandaraya, The Actors Studio at Dataran Merdeka and The Annexe Gallery were used to host Five Arts Centre’s major productions in the past.

In 2015, the studio space in TTDI was converted into a black box called “Kotak” which could accommodate up to 60 people. A grant from Jabatan Kebudayaan dan Kesenian (JKKN) enabled that renovation back then.

The very first show to be staged at Kotak was Baling in 2016, a documentary performance centred on public documents and transcripts from the historical Baling Talks in Kedah in 1955 (to resolve the Malayan Emergency situation).

Since then, countless arts events, talks, shows, exhibitions and workshops have been held at Kotak, the last one being the virtual theatre show Oppy & Professor Communitas in April this year, written by Leow and directed by Fasyali Fadzly. 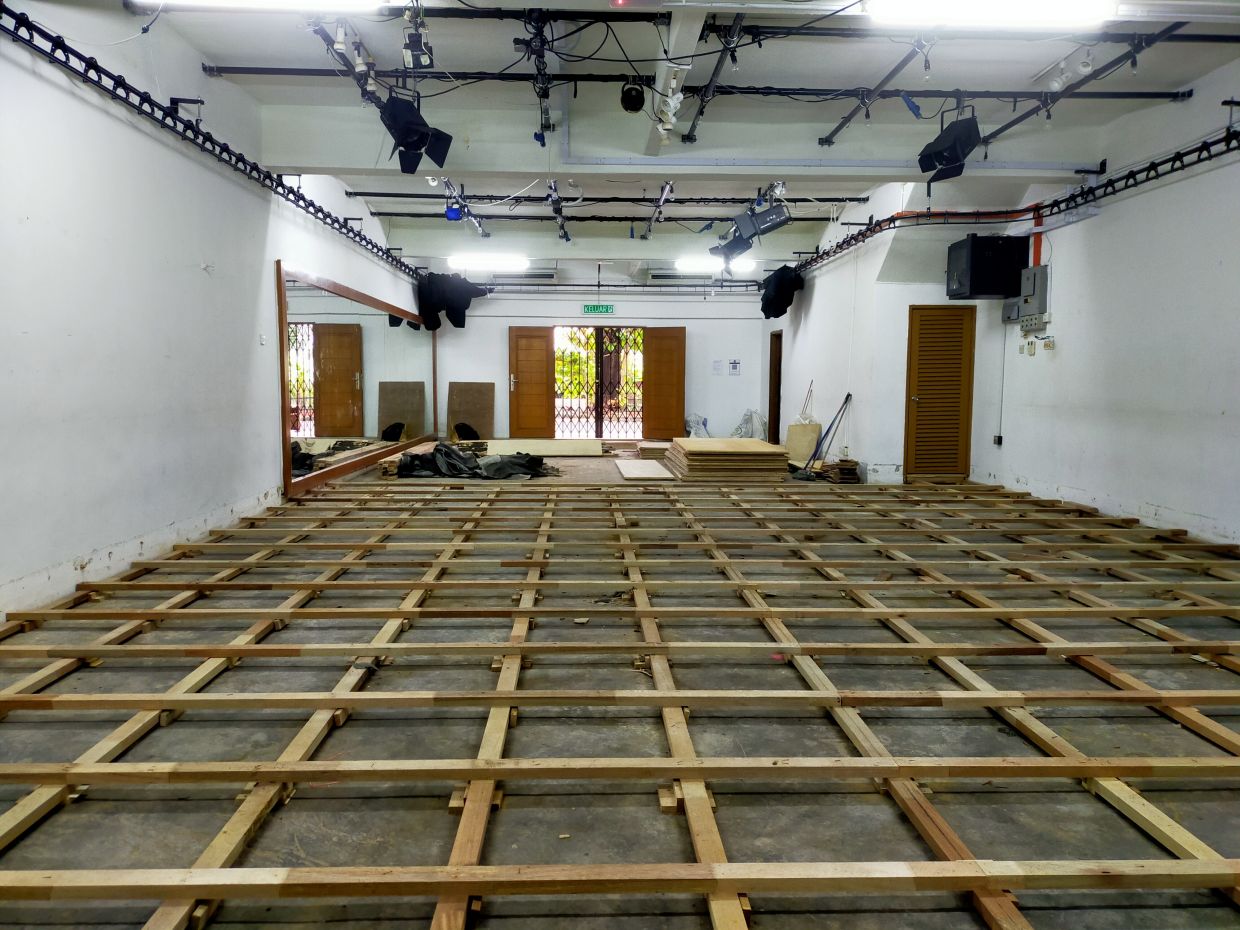 The wooden sprung floor at Kotak was dismantled and it will be reinstalled at the GMBB studio in KL next year. Photo: Five Arts Centre

In July last year, Five Arts Centre unveiled its pandemic-era goodwill initiative called “Open House”. The Kotak studio was shared as a free space for the arts community to use throughout last year.

What prompted the move, shares Tan, was when Five Arts Centre received a notice from its landlord in March this year that the shoplot unit was about to be sold.

After finalising the location of its new space, the Five Arts Centre team and various volunteers started the three week-long moving out process last month, and to downsize operations in light of the new venue's smaller space.

“We had to get rid of a lot of stuff because we are moving to a much smaller space. I consciously did not look through all our stuff because I would have wanted to keep everything. Too hard to release. So much history. So I let the others handle it.

“You get a little emotional, realising that this space, and the people involved, were witness to your life’s work and history,” added Tan.

In many ways, Five Arts Centre’s modest home in TTDI has its own unique place in local theatre history. Five Arts Centre's June Tan indicated that the moving out process at the TTDI arts space was a smooth one, with the arts group members and volunteers packing up and downsizing theatre inventory in equal measure. Photo: Five Arts Centre

It has served as a community-driven, inclusive space, with a long list of collaborations, joint projects and theatre gatherings.

“This place has never belonged to Five Arts only. In the very beginning, we shared this place with Dramalab. We’ve shared it with many over the years – a revolving door of members and former members, production managers and collaborators, audiences, and many others.

“This is a place which when it started didn’t really recognise words such as creative producing, cultural mapping, rumah angkat-ing, socially-engaged art, dramaturgy, documentary performance, lecture performance, online performance, and much more.

“This is a place for new words to describe new things – even when we’re not sure yet about the new things,” he added.

One of D’Cruz’s fondest memories at Kotak were the numerous rehearsals that were carried out, especially her 2013 2 Minute Solos, featuring 11 actors.

“This was exciting because we got to use the entire space, every room, outside the front door and the air well even. That was quite special. The space gave me the freedom to create some unusual work,” she said.

Tan is confident that the new space will give Five Arts Centre the boost to continue creating new and exciting arts projects.

“We’re excited and curious to present work and events for audiences in the city,” concluded Tan.

Earlier this year, Five Arts Centre also upgraded its website, which is now central to its archival activities, detailing its past, present and future. Before Five Arts Centre restarts on-site programmes at its new space, arts enthusiasts can view the collective’s projects from 1984 to present day. More than 200 projects are available for research online.

How to keep heritage stories alive with steel rod sculptures