Royal piano restorer David Winston poses for a photograph with an exceptionally rare Pleyel grand piano, made in Paris, dated 1925, at his workshop in Biddenden in south-east England. Photo: AFP

There's little to distinguish the farm building in Kent, southeast England, from others nearby, except for one thing: the royal warrant over the door.

"By appointment to Her Majesty the Queen, conservators and restorers of pianos," it reads.

Inside the building in Biddenden, near Ashford, is a treasure trove of 26 quirky and rare pianos, amassed over a lifetime by Californian David Winston.

Winston's entire collection is now being sold off at auction, with estimates that some individual instruments could go for up to £60,000 (RM353,000) each.

"I'm nearly 71 now, it's kind of time," said Winston, who initially trained as a violin maker before specialising in pianos.

Some of his work has included on pianos belonging to Queen Elizabeth II herself but he is cagey about the work he did on the Royal Collection's keyboards.

And with good reason: other than saying he worked on "quite a few of their instruments", he is mindful of the story of a woman who once spilled the beans on royal bra fittings.

She lost her warrant not long after.

What he does say is that other major commissions have included restoring the French Pleyel piano belonging to his "great hero" Frederic Chopin. A selection of pianos are seen on display at royal piano restorer David Winston's workshop in Biddenden in south-east England. Photo: AFP

"When I first walked into that room, and that piano was sitting there with Beethoven's name on it, the hair on the back of my neck just stood up," he recalled.

Winston shows off his collection of pianos dating from the 18th to 20th century.

Chinese pianist Xiaowen Shang, a student at the Royal Academy of Music in London, plays a Schubert sonata to demonstrate a piano Winston built himself as an exact replica of a 19th-century Viennese instrument.

The most striking feature is that it has five pedals, while most modern pianos have three.

The extra ones produces a drum and bell sound effect or a bassoon-like rasp - perfect for the martial music fashionable at the time.

"Compared to the modern piano... this is more gentle and has a very sensitive sound," says Shang, calling it her favourite. 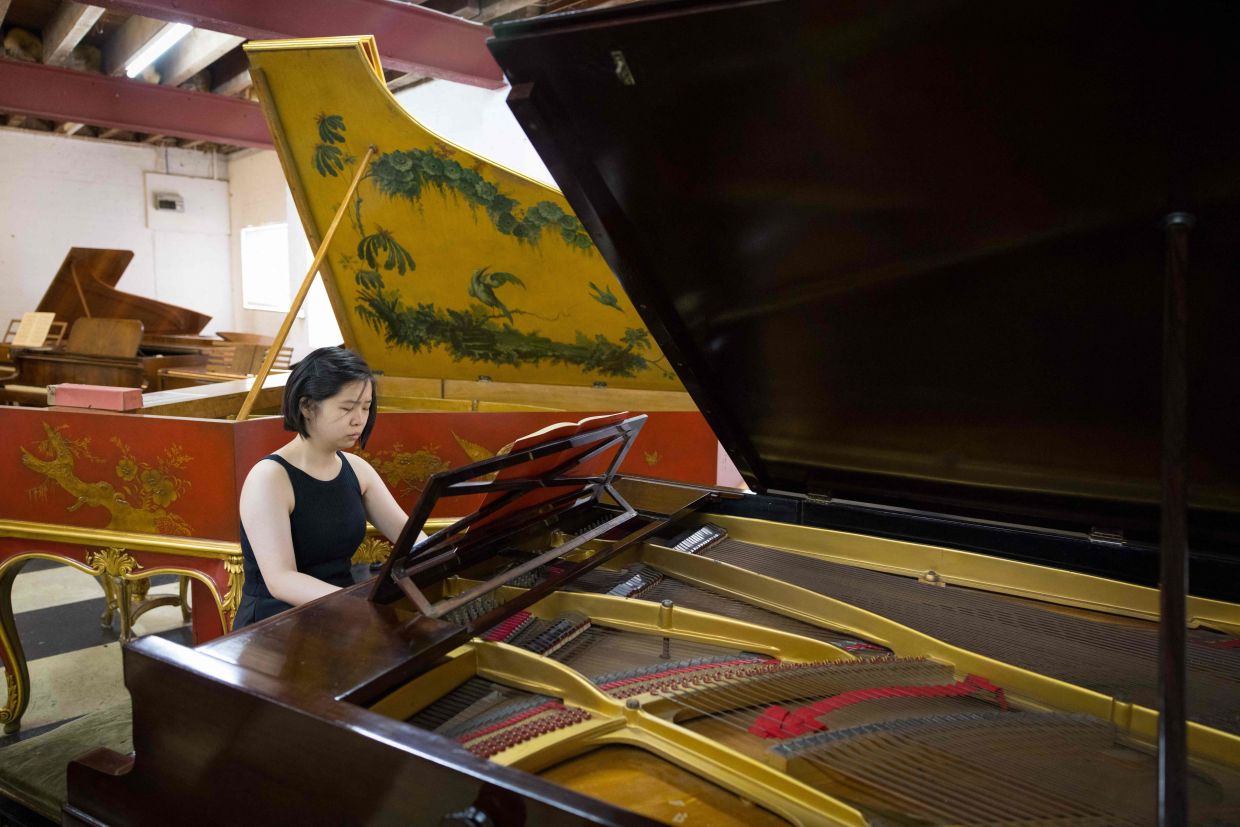 She says she also enjoys playing the French Pleyel Duoclave: a piano with keyboards at either end, allowing pianists to sit face-to-face with the sound rising up between them.

"They're really rare: they only made about 50 of them," says Winston.

The collection does not just focus on antique period instruments but includes instruments designed for 20th-century lifestyles.

Up in the air

Winston gets out sheet music to The Way We Were, a 1970s ballad recorded by Barbra Streisand, and asks Shang to play it on a futuristic grand piano with a sparkly silver aluminium frame.

"This is from the 1960s. It's really stable and it sounds quite good," he says of the piano made by now-defunct Dutch company Rippen.

"They had quite a few of them on ships and there was even one on a blimp (airship) at one time."

Equally eye-catching is a walnut "butterfly grand" from Wurlitzer - a company better known for organs and jukeboxes.

The lid opens from the centre in two wings, creating a stereo effect.

A gorgeous piano decorated with red and gold chinoiserie from 1925 plays piano rolls, a once-popular technology that allows a piano to play music automatically.

Potential buyers could be "amassing a collection of rare instruments" or "just looking for something really unusual and rare that will just completely make a room," said Winston.

Some might attract rock 'n' roll clients, suggests Will Richards, deputy chairman of auction house Dreweatts, which is organising the online sale from Sept 1.

After the sale, Winston plans to spend more time at his flat in Venice, where he is a member of a rowing club, as well as focusing on photography.

"It's getting harder on my body: bending over all the time and lifting stuff and crawling underneath pianos. Sometimes I just feel like a car mechanic." - AFP