If world-famous cellist Yo-Yo Ma could put on an impromptu classical concert in a waiting room at a vaccine centre in the United States earlier this year, it shows you that classical music can be as spontaneous and accessible as any other music genre.

To lift spirits and to inject a bit of song into a decidedly unmusical outing, a few homegrown classical musicians have picked up their instruments and joined the fight against Covid-19. They have been making their rounds at various vaccination centres (PPV) in recent weeks, including at the WTC PPV in Kuala Lumpur.

Members of the National Symphony Orchestra (NSO) were among those serenading the public who received their vaccine at this venue earlier this month. It didn't matter that they weren't in concert suits.

During this period, two string quartets from the NSO each played on alternate days at the PWTC PPV. A string quartet is a musical ensemble comprising two musicians on the violin, one on the viola, and a cellist.

He notes that some people lingered a while to listen to the music, with some even wanting to make a donation to show their appreciation.

“We were there to entertain the public and we feel honoured to be involved in creating good vibes for them. There were even people who danced along to the music, but perhaps it might have been due to the relief they felt after receiving their vaccine,” says Nasran with a laugh. The last time the NSO performed in public was in April this year, at the NSO Lambang Sari Series 2021 - La Fiesta. It was a short-lived return to the stage for performers and theatre spaces in KL and Selangor, as they were only open for a few weeks before having to shut their doors to the public once again, the following month.

“This pandemic has been very punishing for many people. The arts, especially the performance arts, really took a beating. Musicians, actors, dancers, venues and even event equipment providers are badly affected. Many in the arts have lost their source of income leading to some having to sell their cherished instruments. Even though society seeks solace in the arts, it seldom considers the arts as essential,” says Nasran.

Still, the NSO, which falls under the ministry of tourism, arts and culture Malaysia (Motac), is proud to contribute in some way during this challenging period, as the country and the world battles the pandemic.

Besides the live music performances at the vaccination centres, a dozen or so NSO members are also helping out with non-medical duties at various PPVs.

“We are used to holding musical instruments in our hands, but when we are on duty at the PPVs, we have to handle people instead. It is a whole new ballgame and can be very stressful at times, especially when people think we are medical personnel and take out their frustrations on us.

"But we try our best to play our part and help in any way we can, during this pandemic. With the increased vaccination rate in the country, I believe we are finally seeing some light at the end of the tunnel,” he says.

Nasran notes that in the near future, they have to pick up the pieces and rebuild: “NSO will resume our programmes, either as recorded performances or live performances, as soon as it is possible to do so.” 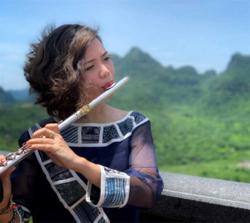