‘It is quite tough to be an artist and activist at the same time. I never planned for it to work out this way, but I am embracing it, ’ says Shaq, standing next to his Mah Meri-inspired painting 'Sacred Sea Dance' at Richard Koh Fine Art gallery in KL. Photo: The Star/Glenn Guan

Orang Asli artist Shaq Koyok was just a boy when life in the village as he knew it changed. A land developer came into the jungle surrounding his kampung and got to work.

“I remember lorries carrying logs from the jungle. I also heard chainsaws and trees being felled. I remember how the village roads were damaged and it made it so hard for the villagers to go out, ” recalls Shaq (real name Shahar Koyok), who hails from the Temuan indigenous community in Selangor.

As an eight year old, Shaq wasn’t privy to the implications of such activities in his village in Kampung Pulau Kempas, Banting (Kuala Langat district), but he recalls that it bothered him.

“I don’t know why it did, but I think as an Orang Asli, I have a strong connection to nature. I often went fishing in the jungle, especially during the rainy season. I played in the jungle with my friends too. The jungle was my playground, ” he says.

This incident made such an impression on him that it gave him nightmares until this day. The fact that this is an ongoing issue means it is always on his mind.

Shaq is 36 this year and land encroachment issues are still plaguing the Temuan community.

“A second round of logging in 2006 destroyed half of the North Forest Reserve. A similar land encroachment incident happened again early last year, ” he says.

A voice through art

Land Of A Thousand Guilts, his solo exhibition at Richard Koh Fine Art in Kuala Lumpur, is his response to how deforestation impacts Orang Asli communities.

Shaq sees it as an extension of his social activism efforts and an attempt to create more awareness about the price of development and the impact on the indigenous communities and the environment. Shaq Koyok's 'Mendraq' (acrylic on canvas, 2021), which shows an Orang Asli child as a tiger. Shaq sees the young Orang Asli as the keepers of the forest, a new generation more equipped to deal with environmental issues and conservation. Photo: The Star/Glenn Guan

“In a rapidly modernising Malaysian state, I am always trying to capture the tension and pressure faced by my people, whose lives interact with and respect the natural environment. My work emphasises the inequalities that exist between modern consumerism and traditional sustainable ways of life.

“My art is a reflection of my people and the rainforest in which I grew up, and the importance of nature to the Orang Asal, ” he elaborates in his artist statement.

He was supposed to exhibit a third solo show at the National Art Gallery late last year, but the art institution has been closed for renovation works since October last year.

In the past year, Shaq, who is trained in fine arts (UiTM), has been busy with community projects despite the pandemic situation.

On the art front, he completed a few murals during this time, including a wall portrait of Maznah Unyan, founder of Tompoq Topoh, at the Centre for Malaysian Indigenous Studies in Kuala Lumpur. Tompoq Topoh is the Mah Meri women’s first weave initiative on Pulau Carey in Selangor. 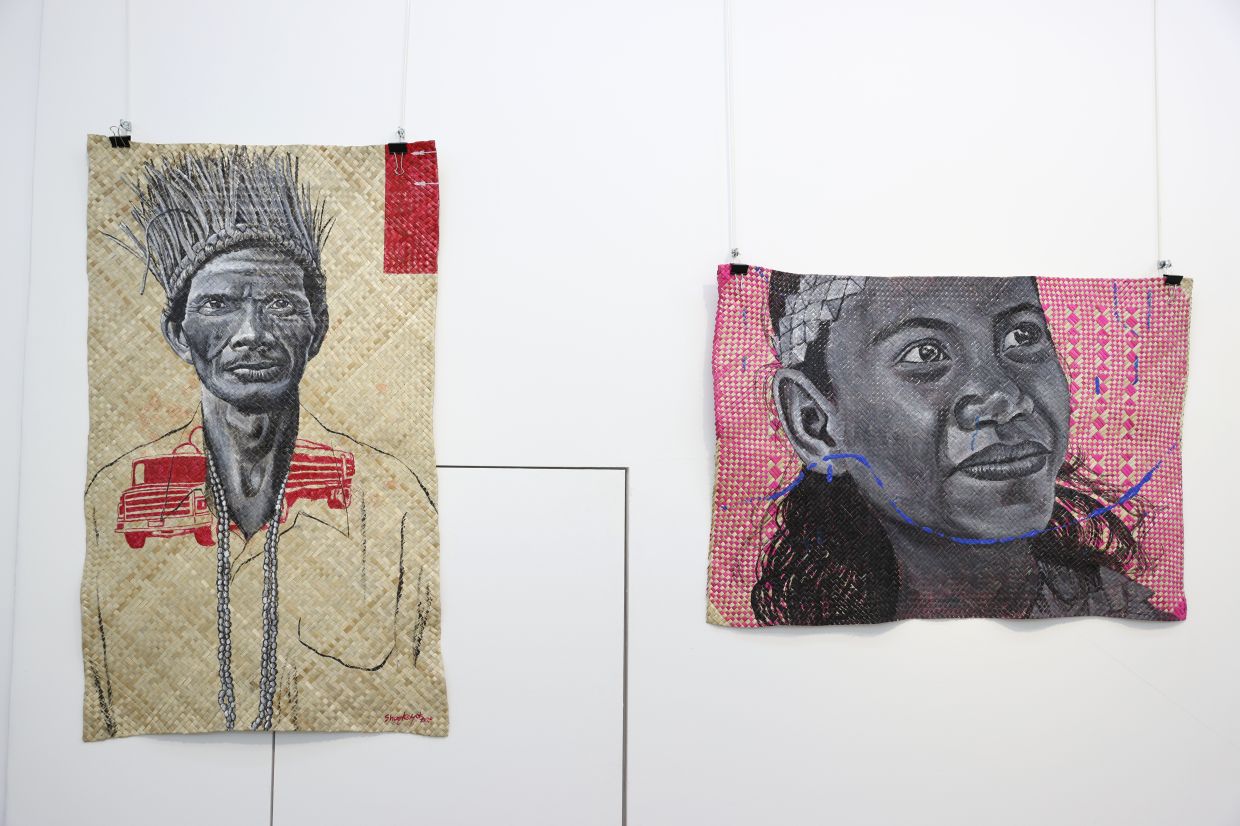 Last year, he participated in an online group exhibition Covid Impact On Freedom Of Speech, and also participated in virtual seminar sessions with international indigenous communities.

“It is quite tough to be an artist and an activist at the same time. I never planned for it to work out this way, but I am embracing it, ” he says.

Through his work, Shaq hopes to share some of the problems faced by the Orang Asli and help raise awareness on these issues.

His installation work titled The Witnesses – featuring a burnt forest and how logging devastates a landscape – was shown at the Bakat Muda Sezaman/ Young Contemporaries exhibition in 2019 at the National Art Gallery.

It served as a rare mainstream platform to highlight indigenous community issues.

The Gerimis art exhibition project, featuring Shaq and five Orang Asli artists, at the George Town Festival in 2019 was also another notable initiative.

“I think visual work, especially paintings, says a thousand words. I want to put more images of indigenous people out there and I would also like to address the problem in our country’s political system where discrimination happens right in front of our faces. 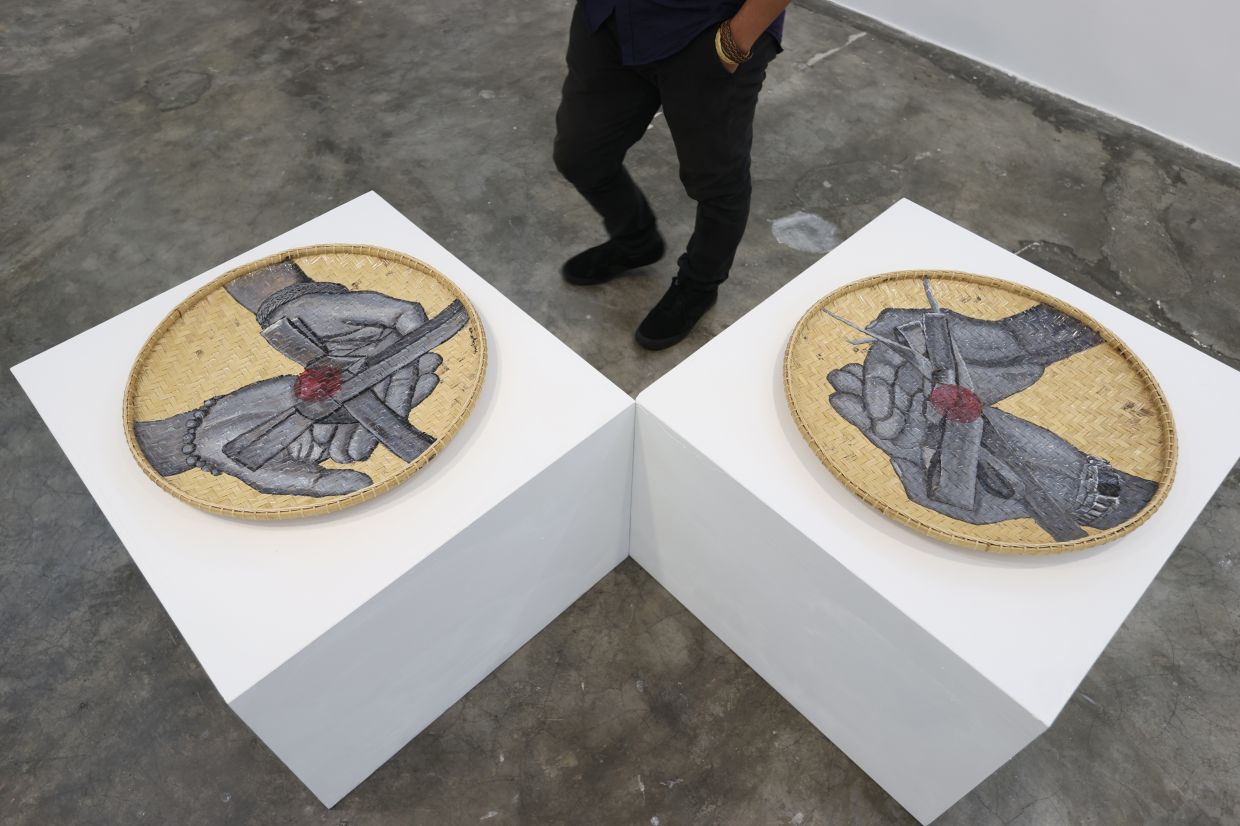 “It is sad that we are in 2021, and the Orang Asli are still considered marginalised citizens. It creates so much anxiety among the people. The question is, what am I or what are we going to do about it?” he laments.

A matter of survival

In the last year, Shaq relates how Orang Asli villagers, who have forged a deep connection with the forest over generations, survived off the land.

When many Orang Asli people lost their jobs in the urban areas during the pandemic, it was the forest that kept them going.

“It basically saved them from hunger as they could hunt, gather and grow food in the forest. As a community that has a close relationship with the jungle, they are afraid that their identity will be wiped out if the jungle is lost, ” says Shaq.

During the various movement control orders, Shaq also made it a point to boost the virtual content for his YouTube channel (Shaq Koyok Art).

While working in his studio in Titiwangsa in KL, he started with “random” vlog videos but now his focus is more on art-related content, including documenting his work process.

In Land Of A Thousand Guilts, there are several works where Shaq paints on mats made of pandanus leaves. The Temuan tribe use these leaves to make traditional handicrafts such as baskets, bags and mats. For the purpose of this exhibition, he commissioned his mother and sister to weave these mats for him.

“I got inspired after seeing artworks by the indigenous artists in Australia and New Zealand. My mother is a big inspiration as well as I grew up watching her weave the pandanus leaves.

“More often than not, these leaves are made into a mat to sit on. But I also want people to appreciate this mat as a form of art, not unlike paintings on canvas or paper. It might be challenging to exhibit this kind of artwork in contemporary spaces but sometimes we need to break away from the norm, ” he says. This exhibition also showcases portraits of Orang Asli friends or people he has met before during his field research and workshop sessions.

For instance, Hardy Of Busut Baru is a good friend of Shaq, whose village was moved from its original place to make way for the Kuala Lumpur International Airport development.

In Mendraq, Shaq paints a Jahai boy from Kampung Sungai Tanhain in Royal Belum, Perak, whom he met during an art workshop held in collaboration with non-governmental organisation Rimau.

"This Jahai boy is our hope for the future. You have read about indigenous patrol rangers in the Royal Belum State Park. That's how we move forward... empowerment. It's about equipping the Orang Asli with the knowledge to disable poacher networks. Be it dismantling tiger traps, animal snares or teaching the Orang Asli how to respond and report poaching activities, these are the positive steps to keep the forest and its inhabitants safe," says Shaq.

Another artwork Nightmare Of Moyang Bajos depicts the Mah Meri spiritual dance during the Puja Pantai ritual on the Carey Island beach in Selangor.

Shaq relates how he has friends who are worried that their traditional territory will be affected by the development projects that are happening everywhere.

“They are afraid that in the future they won’t be allowed to perform their religious ritual on the beach anymore, ” he says.

“I want to tell these people’s stories in my artwork and what better way to do that than by painting their portraits? Some of these stories are hard to depict in the written form so I let the visuals do the talking.

“There is also a lack of Orang Asli representation in Malaysian narratives, so I hope that with these artworks, people will also see some of the faces of the first people of Malaysia, ” he says.

In the near future, Shaq hopes to set up a mentoring programme with Orang Asli youths through an art workshop, particularly those who live in rural areas and communities who do not have access to formal education.

Land Of A Thousand Guilts is on at Richard Koh Fine Art, Bangsar in KL till March 20. The venue for the exhibition is supported by Cendana. More info here.

'Land Of A Thousand Guilts' ‘It is quite tough to be an artist and activist at the same time. I never planned for it to work out this way, but I am embracing it, ’ says Shaq, standing next to his Mah Meri-inspired painting 'Sacred Sea Dance' at Richard Koh Fine Art gallery in KL. Photo: The Star/Glenn Guan

Shaq Koyok's 'Mendraq' (acrylic on canvas, 2021), which shows an Orang Asli child as a tiger. Shaq sees the young Orang Asli as the keepers of the forest, a new generation more equipped to deal with environmental issues and conservation. Photo: The Star/Glenn Guan

Shaq working on 'Sacred Sea Dance' (arylic on pandanus mat, 2020) in his studio in Titiwangsa in KL. Photo: Shaq Koyok

Shaq's 'Black' (acrylic on canvas, 2021), which comes from a series of portraits of his Orang Asli villager friends.