'In addition to the fields of art and calligraphy, various fields such as literature, technology, music and religion must be studied, and then they can influence one’s work subtly. I like this process,' says Ong. Photo: The Star/Yap Chee Hong

“I have seen the wonder of a drop of dew glistening from a dangling needle, a shower of rock hailing down in a raging thunder, a flock of geese gliding, frantic beasts stampeding in terror, a phoenix dancing, a startled snake slithering away in fright, ” said Chinese calligrapher Sun Guoting (646-691) from the Tang Dynasty, on viewing calligraphy.

No doubt, Chinese calligraphy is beautifully handwritten text. But perhaps more significantly from a historical viewpoint, this form of self-expression and cultivation was a visual art form that was prized over all others.

Kuala Lumpur-based calligraphy artist Ong Chia Koon would be able to tell you about how it drew him in. After all, he has been immersed in the world of Chinese calligraphy and ink painting for over 20 years now, with an ongoing mission to explore the convergence between Chinese calligraphy – which is a traditional art form – and contemporary art.

“As a contemporary calligraphy artist, I want to add some contemporary elements to calligraphy works. For example, the content of the writing, the size of the work, a bolder use of ink and brush strokes. These are not only eye-catching, but also more expressive of my own emotions when making works and are a kind of participation of this era’s sensibilities, ” says Ong in a recent interview.

He recalls how during his student days, he was drawn to Japanese modern calligraphy from the 1960s. He thought that the unconventional method of presentation – such as enlarging characters and overlapping fonts – resulted in a completely different and unique visual effect.

“Then when I look at local calligraphy works, it seems they are always written in the same way they were written about a hundred years ago. Visually, any works that can catch the eye have already been bought. Regardless of the overall feeling of the work or the composition of points, lines and surfaces, in my opinion, the content itself is more important, ” he notes.

Ong incorporates ancient poems, modern poetry, contemporary articles and lyrics in his calligraphy works. To him, poetry in particular is “like a key” that opens the doors of emotion.

“It is apt that abstract emotions can be expressed by the basic – yet abstract – elements of dots, lines and planes in calligraphy works, ” he says.

Attentive In Drinking Tea (ink on paper, 2020). Photo: The Back Room KL

Last month, Ong pushed aside the pandemic blues and kicked into 2021 on a positive note with a solo exhibition at The Back Room KL, which features 13 works consisting of nine cursive scripts and four seal scripts.

The show is temporarily closed because of the movement control order (MCO), but the gallery has indicated it will be extended.

The works in Sing A Song draw from Tang Dynasty poems, including Tang poet Wang Zhihuan’’s epochal Climbing Stork Tower, as well as poems by local poets from the 1970s and 1980s.

“The narratives in Tang poems reflect scenes from life at that time. The life experiences and emotions of the poet are all contained in the poem. I often feel like I have experienced similar situations as conveyed in these poems, ” says Ong.

Here he references Chinese poet Li Bai’s Meditations At Night as an example: “Before my bed, bright moonlight; Could it be frost on the ground; Head raised, I look up at the bright moon; Head bowed, my thoughts go to home.”

"As a person who has left his home town, this poem expresses how I often feel. It is so beautiful, so elegant in its syntax and expressions. In appreciating their work and attempting to understand them and the times in which they lived in, you realise that they are just like you and me. They all feel joy, anger and sorrow, ” says Ong, 48, who was born and raised in Melaka. 'I believe that art must not work behind closed doors; it must enrich oneself,' says Ong. Photo: The Star/Yap Chee Hong

When Ong first encountered calligraphy, his first impression was that it was very challenging. To the young Ong, it seemed almost an impossible task to master control of the soft brush and write lines that express different feelings.

“But from constant practice, I feel that I must persist in order to master the skills. Only after having skills can you express yourself freely, ” he muses.

The artist shares that before he started studying calligraphy in earnest, his brush calligraphy left much to be desired.

“In secondary school, when writing letters to female pen pals, I used a hard ink pen. At that time, I forced myself to write slowly, so the writing would look better. My parents appreciated and encouraged me when they saw it. But at that time, my brush writing was still just as ugly, ” he says.

He went on to study Fine Art, majoring in Ink Painting at the Malaysian Institute of Art (in KL), a time he considered the turning point of his calligraphy journey.

In 1995 and 1997, he was awarded first place in the Malaysian Open Calligraphy Competition.

Since then, Ong has exhibited in Malaysia as well as in China, Korea, Taiwan and Thailand, including at the Busan Calligraphy Biennale (2007 and 2009), the Mind Of Still Tianmei Art Gallery in Tianjin (2010) and the Soka Gakkai Gallery in KL (2012).

In 2005, he visited the birthplace of the oracle bone script to see the writing in person. It left such a profound impression on him and it influenced a drastic change in his calligraphy style.

“Visually my composition became a lot richer and diverse in its forms, with bold changes in brush and ink. In the past 10 years, I have tried everything from large works to small works. I believe that art must not work behind closed doors; it must enrich oneself.

“In addition to the fields of art and calligraphy, various fields such as literature, technology, music and religion must be studied, and then they can influence one’s work subtly. I like this process. Apart from learning a lot and gaining knowledge, I can also understand myself and the world better, ” he says. Despite his traditional tools, Ong strives to inject contemporary elements into his work. Photo: The Star/Yap Chee Hong

Ong had planned to go to China last year to make products from porcelain and purple sand (Yixing clay), but due to the pandemic, that plan was cancelled.

As with most of us, he will also not be travelling to his home town this Chinese New Year.

“Last year we had a Lunar New Year when we watched how the people in Wuhan could not celebrate the lunar new year as usual. This year, with the MCO here, we will experience the same.

“Although I cannot return to my home town, I believe it is something we need to do in our efforts to control the spread of the virus, ” he says.

Ong hopes to hold a calligraphy show in Melaka in the near future, as well as a large-scale solo exhibition in about three years from now.

“Despite the pandemic circumstances now, my work has to go on, and we always have to keep our plans and dreams alive, ” he concludes.

The Sing A Song exhibit is on at The Back Room, 1st Floor, 80A Jalan Rotan, off Jalan Kampung Attap in KL till Feb 21. The gallery is open by appointment. All the works can be viewed here. 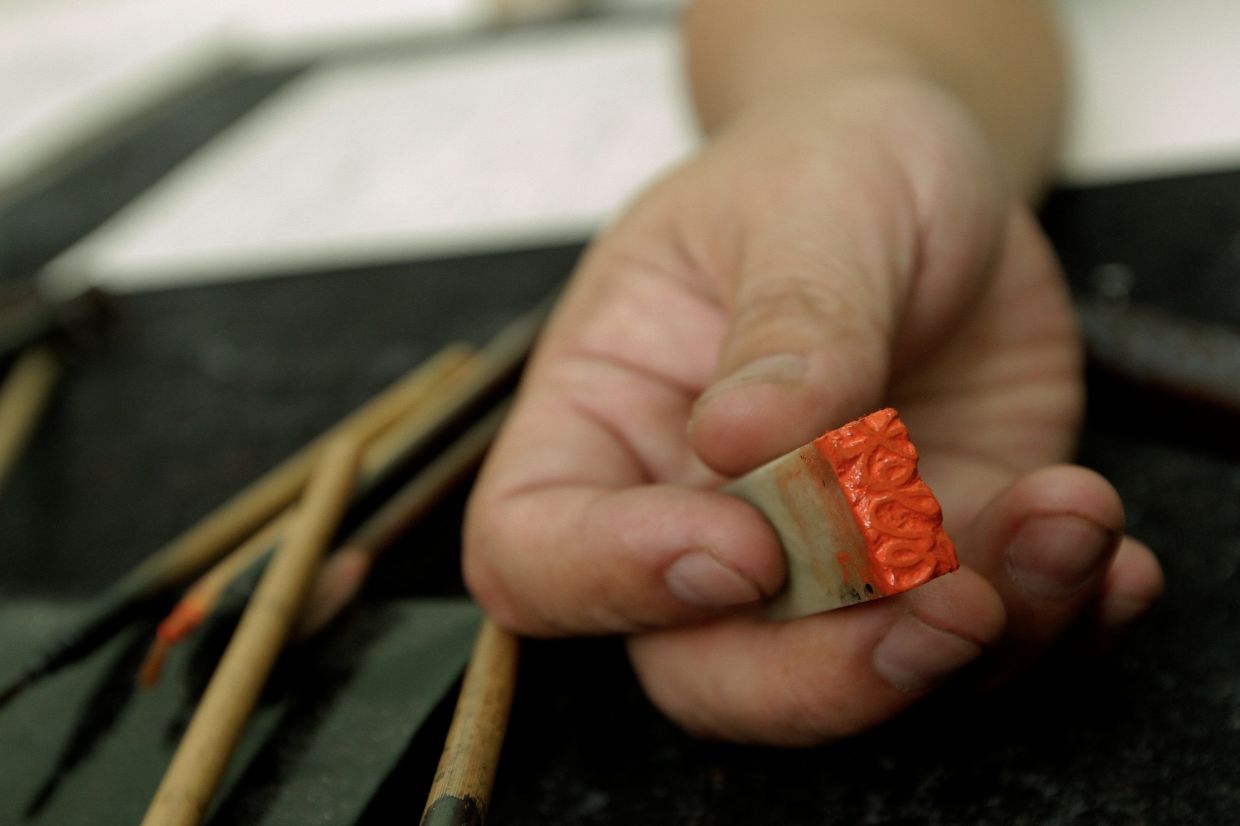 'In addition to the fields of art and calligraphy, various fields such as literature, technology, music and religion must be studied, and then they can influence one’s work subtly. I like this process,' says Ong. Photo: The Star/Yap Chee Hong

When Ong first encountered calligraphy, his first impression was that it was an impossible task to master control of the soft brush and write lines that express different feelings. Photo: The Star/Yap Chee Hong

Joan of Arc to be made non-binary character in new London production
How BookTok has made US novelist Colleen Hoover a superstar
Stand-up puppet comic Randy Feltface aims for world domination
Malaysian author joins judging panel for the International Booker Prize 2023
Flowered up: is it is too soon to beautify the wreckage of war?
Gajen Nad's 'Chindian' roots livens up Malaysian comedy's cultural melting pot
Grammy-winning group Planet Drum unites global percussionists in common rhythm
'The Horse Whisperer' author Nicholas Evans dies at 72
For Malaysian history enthusiasts, 'KAPMAN' complex is a must visit
'Be water, my friend': Seattle exhibit focuses on Bruce Lee's philosophy