It took Lee several years before he managed to capture this stunning photograph of a Bornean Clouded Leopard. Photo: Chien C. Lee

The idea of going on outdoor expeditions and jungle trekking adventures to beat cabin fever once the pandemic situation improves is a tempting one.

For now, the alternative is to check out an exhibition which leads viewers deep into the rainforests of Borneo.

The newly reopened show Borneo’s Tree Of Life at the GMBB mall in Kuala Lumpur is not your average photography exhibition. The exhibit was temporarily shut because of the movement control order last month, but its doors are open now, welcoming a limited quantity of visitors (with strict SOPs in place).

This immersive exhibition by US-born biologist-turned-photographer Chien C. Lee, who is now based in Sarawak, will transport you to the rich and diverse rainforests in Borneo.

You’re bound to forget you’re stuck in the city once you walk into the exhibition space, which features stunning images and actual jungle recordings, as well as scents (by OLFAC3).

Borneo’s Tree Of Life collects a total of 30 photographs that span 15 years of Lee’s work in Borneo. The exhibition features a total of 30 photographs that span 15 years of Lee’s work in Borneo. Photo: GMBB KL

It features interesting stories of Bornean rainforests through the discoveries of new and lost species, clever adaptations for survival and interactions between organisms that illustrate how interconnected the tree of life is.

As a wildlife spotting trip, this exhibition, put together by an avid naturalist like Lee, is bound to have many highlights.

From an elusive jungle cat foraging in its habitat, to fruit bats feeding on fig trees, Lee’s photographs turn the spotlight on lesser-known animal species found in one of the oldest rainforests on the planet.

“As one of the most complex ecosystems on the planet, with hundreds of thousands of species, this exhibition can only aim to provide a handful of windows into the wondrous animals and plants that are found there, ” says Lee, 49.

“Each photograph is accompanied by a brief story about its subject, and with these the viewer can come away with a glimpse into the remarkable adaptations and behaviours that these organisms need to survive, ” he adds. 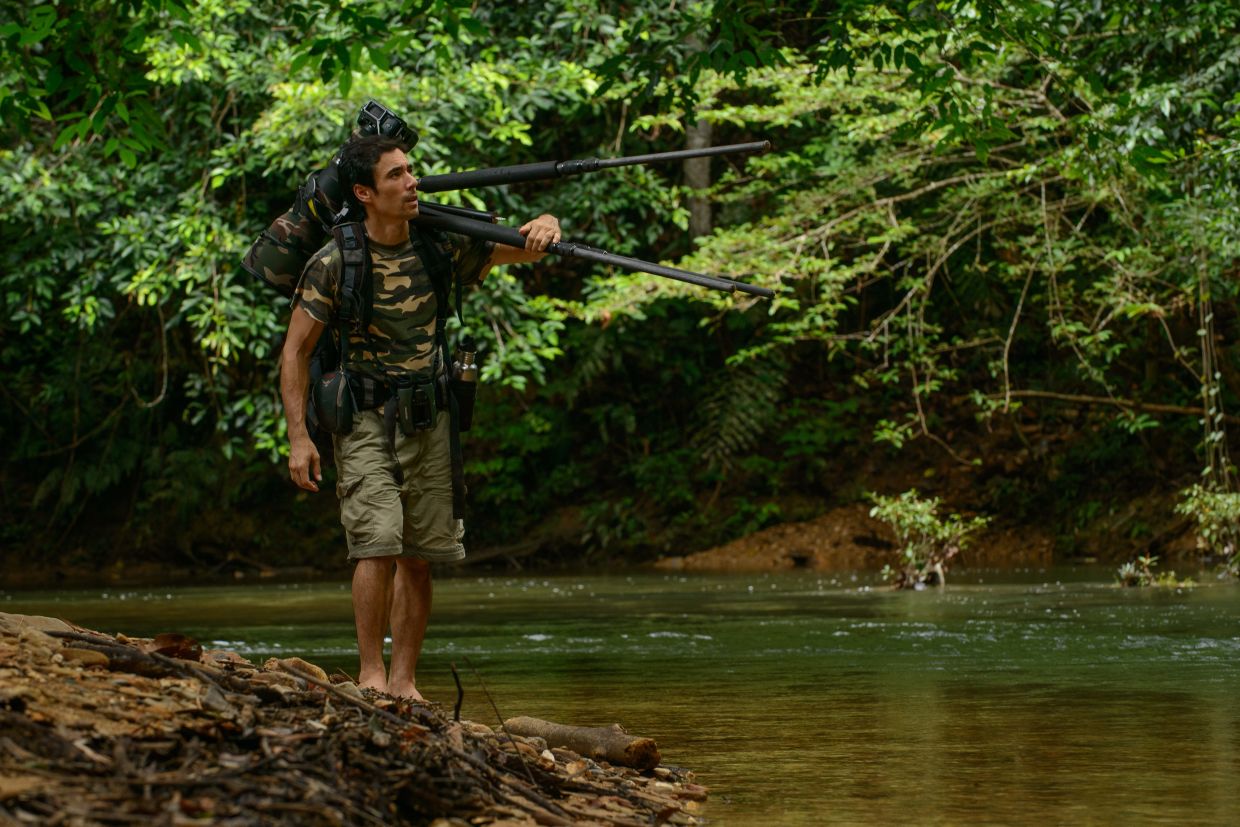 Nature lover Lee moved to Sarawak from his hometown in California in 1996. Photo: Chien C. Lee

Lee, who moved to Kuching in 1996, is originally from California.

He adds that the exhibition, in an ideal sense, also aims to inspire and encourage visitors to venture into the forest themselves, and have their own experience with nature.

The exhibition, which runs until June 30, is neatly organised in a 74.3sq m darkroom setting at GMBB, giving depth to the photographs and making them feel more life-like, says Lee.

The exhibition took Lee and the GMBB team nearly a year to put together.

It was originally slated for a June 2020 launch before getting postponed to October, and finally launched in January. 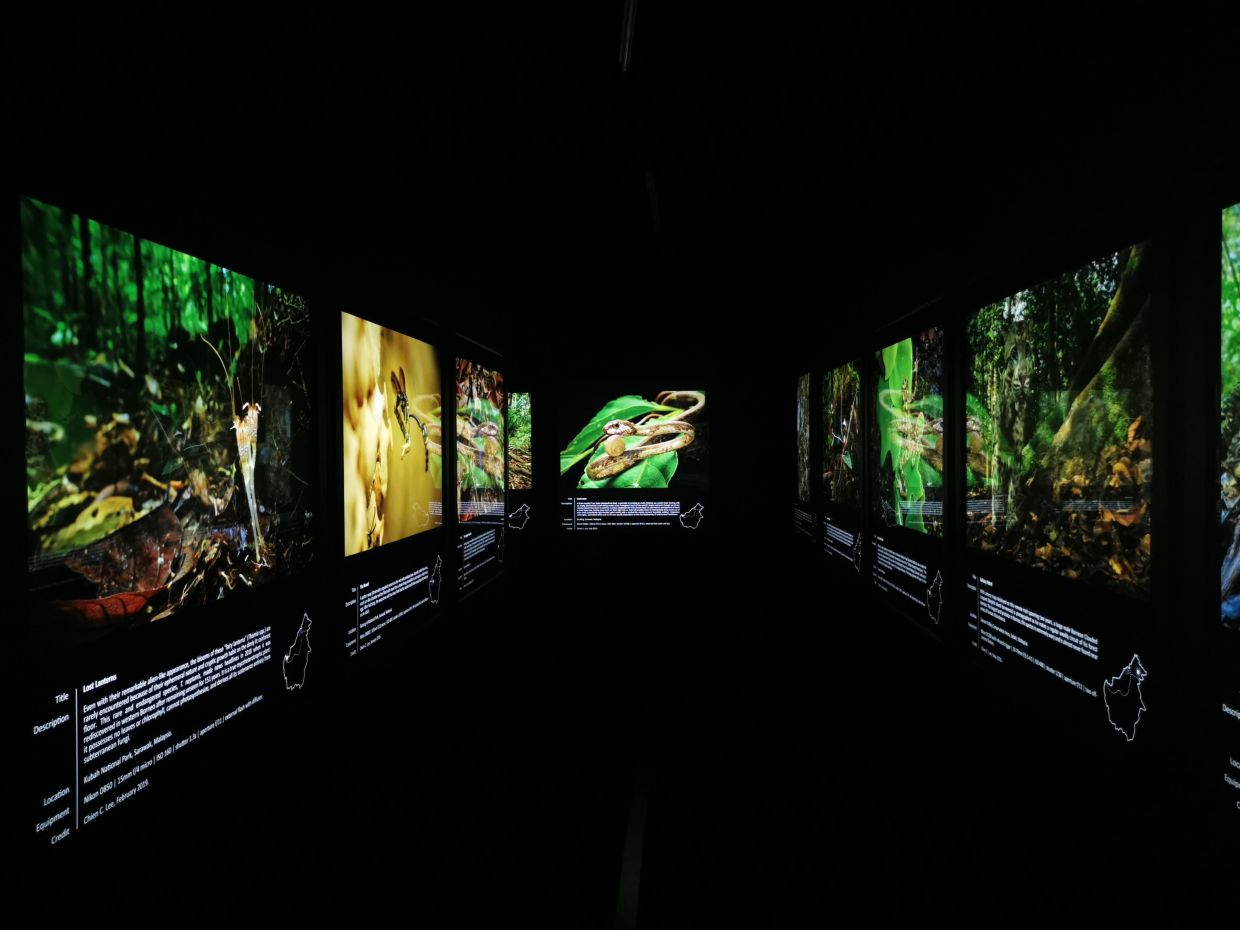 Borneo's Tree Of Life is an immersive exhibition set in a darkroom, complete with sound and forest scent. Photo: GMBB KL

Lee worked remotely with the KL team to set up this wildlife photography exhibition.

Love for natureThe photographer’s own passionate relationship with nature started when he was a young boy.

A self-confessed “nature nerd”, Lee says growing up, he was curious about insects, animal tracks, carnivorous plants and everything else in between.

This led him to pursue a degree in biology at the University of California in Santa Cruz and eventually landing a job as an environmental educator.

Though a self-taught hobby at first, Lee says photography eventually became “a full-time endeavour around 2005 after I had already been living in Borneo for nearly 10 years”.

“Not only was this a wonderful medium to record all the amazing organisms I had been encountering in the rainforest, but it was also a means of sharing these exciting finds with others.

“My ultimate aim as a photographer is to produce images that help to inspire a deeper understanding and respect for our natural world, ” points out Lee. 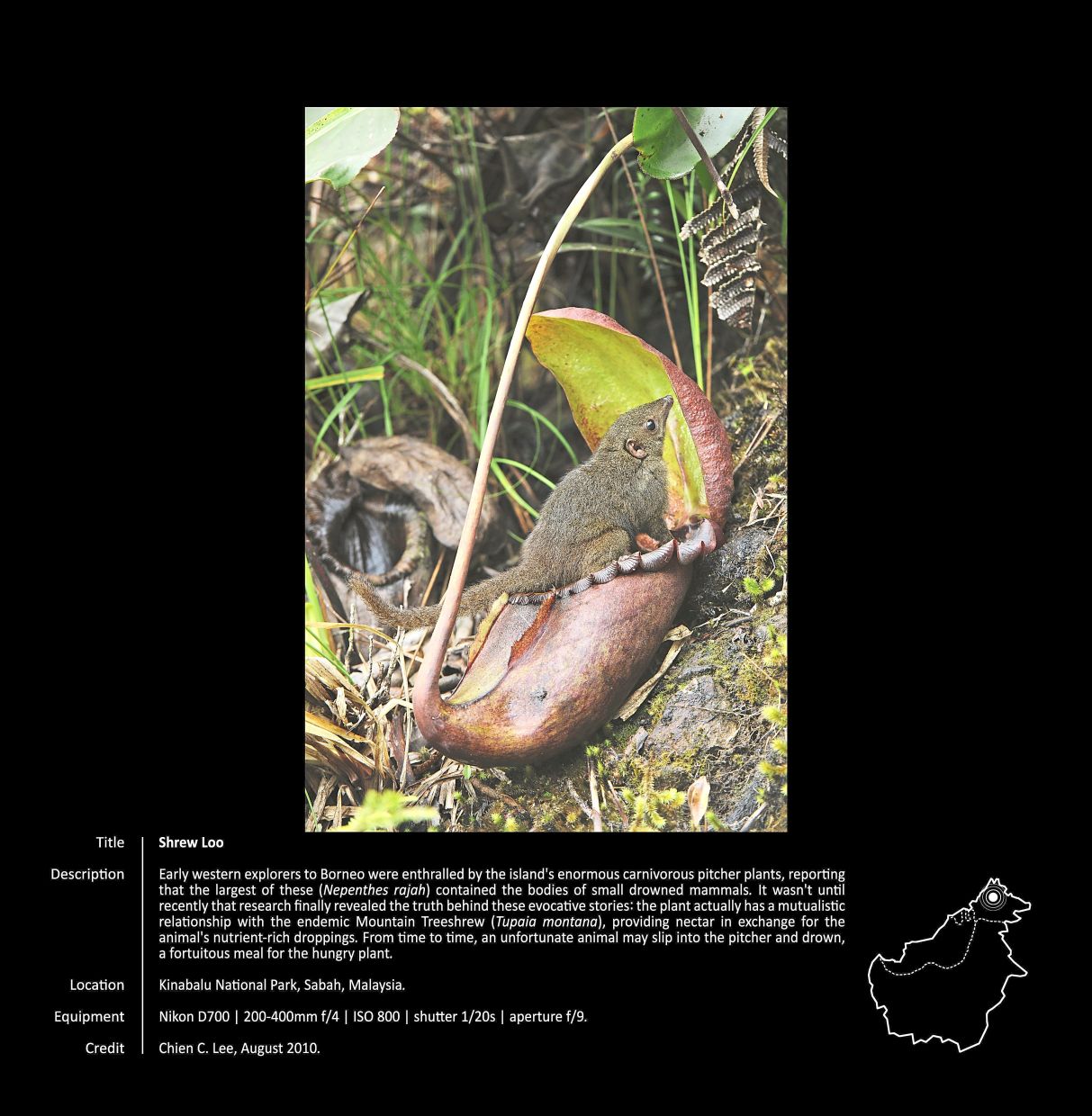 Lee was thrilled to capture this photo of a treeshrew feeding on a pitcher plant. Photo: Chien C. Lee

Since 2003, Lee had been engaged as a professional wildlife photographer. His photographs have been widely used by international publishers, including National Geographic, the Smithsonian, and the BBC, as well as numerous Malaysian publications.

His previous exhibitions include Jungles (2019), Birds Of Borneo (2015) and Carnivorous Plants And Their Biotopes (2010).

However, for the Borneo’s Tree Of Life exhibition, Lee offers viewers a series of photographs that have never been shown.

One of the highlights of Borneo’s Tree Of Life is a rare photograph of the Bornean clouded leopard called Solitary Patrol.

The breathtaking image shows a large male clouded leopard as it makes a regular weekly circuit of its forest domain.

The clouded leopard is almost never found near areas of human encroachment and is extremely wary of its surroundings.

This photograph is the result of a photographer’s years of patience.

In 2014, during an assignment in Sabah’s Danum Valley Conservation Area, Lee had deployed multiple camera traps over several months, checking them repeatedly and moving the traps to new locations.

“Eventually I found a remote trail where a solitary clouded leopard seemed to pass by with remarkable regularity. Unfortunately, all my photos at the time were less than ideal.

“Two years later I returned to the same site, again to do some camera trapping. I thought it would be a slim chance, but... voila! This photo is the result.

“Not only was the image a success, but it is a great insight into the habitual behaviour of animals like this, and a great example of how you have to learn about your subject patiently to ultimately capture the image you are seeking, ” explains Lee. 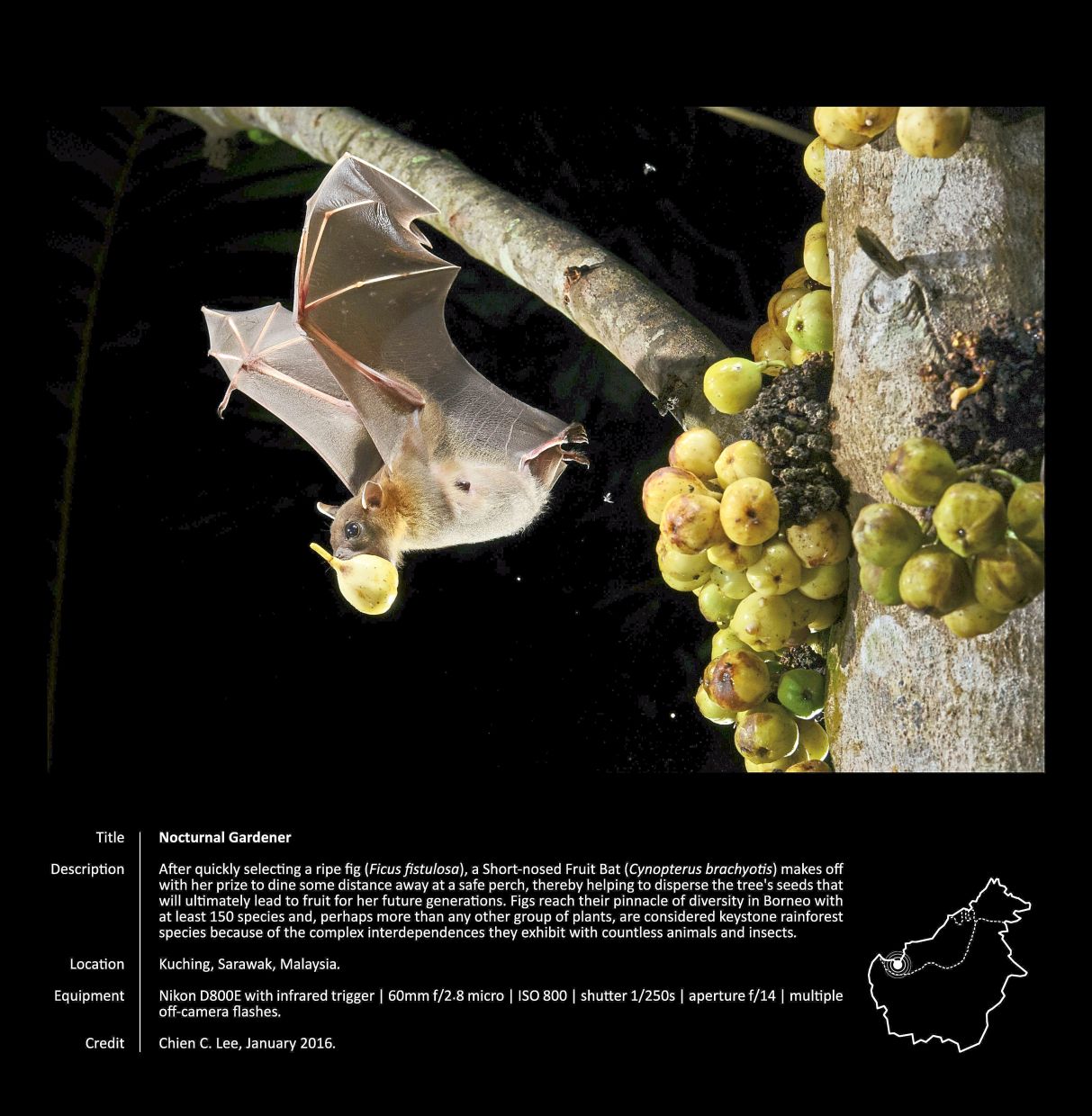 This photograph of a fruit bat was captured outside Lee’s home in Kuching. Photo: Chien C. Lee

A more personal piece is called Nocturnal Gardener, which is a photograph of a fruit bat feeding on figs.

Just like the image of the clouded leopard, this also took Lee several years to capture.

However, he was able to take it from the comforts of his home, which is near a small nature reserve.

“I decided to plant one of the fig tree seedlings in a spot at the back of the garden which would not only be convenient for the bats to reach but also for me to get a clean image.

“Within two years it was large enough to begin bearing fruits. As soon as it did, the bats showed up for their feast.

"I was able to take the photo by using an infrared laser trigger wired to the camera, ” he elaborates.

Lee admits that now is far from an ideal time to hold an exhibition such as Borneo’s Tree Of Life, but the medium of art, including photography, can be a comfort.

He agrees the pandemic has put a heavy strain on people.

“It’s important that we find ways to get out and experience new things despite the pressures we’re all facing.”

The show is subject to all the public health guidelines and admits a limited number of visitors.

“If visiting this exhibition can also encourage some people to later venture out for a hike in the rainforest, I’m sure it will be a positive experience, ” he concludes.

Borneo’s Tree Of Life is on at Level 3 of GMBB in KL until June 30. Free entry. Opening hours: 11am o 6pm (daily). Facebook: GMBBKL. Only eight visitors will be allowed in at any one time.