The Year of the Metal Ox is here, and there has been a barrage of imagery, reflecting and celebrating this mighty beast, the second of the 12-year periodic sequence (cycle) of animals which appear in the Chinese zodiac.

Instead of taking the festive route, let's detour with some artworks - featuring the ox to kerbau - by Malaysian artists through the years. The art galleries might be closed now because of the pandemic, but that is no reason to forget local art.

Here is a list (by no means exhaustive) of some Ox-related artworks:

This stone and cement dust sculpture by the late Johor-born pioneer artist Anthony Lau was made a year before the formation of Malaysia in 1963.

The sculpture is one of the artist’s earliest works and his usage of stone and cement was considered unconventional back then.

This work, a permanent collection at the National Art Gallery, involved moulding and carving techniques with semi-abstract style and representational art.

The bull symbolises the strength of the stock market and the usage of cement and iron (important materials in the development sector) symbolises the country's economic and social growth in the 1960s. Called the father of Batik painting, the late Datuk Chuah Thean Teng’s Bullock Cart is a testament to his artistic skills.

Keeping things simple and the mood light, this batik artwork shows a train of two bullock carts in a kampung setting.

They are controlled by riders in white kopiah with simplified canopies set up on the bullock cart. The pencil-etched lines give the picture the lightweight touch of a drawing.

Chuah was honoured with a retrospective by the National Art Gallery (NAG) in 1965 and the Penang State Art Gallery in 1994, and again in 2008 with a tribute exhibition by the NAG. Evoking a sense of nostalgia with his distinctive figurative paintings that reflect the serene rural lifestyle, the Klang-born artist is said to have a soft spot for the ox.

Beautiful Life shows all of that. The serene artwork shows two cowherds, grazing cattle, trees and mountains in the distance... reflecting the country life.

As an artist, Tew was known for this Nanyang painting style (a regional art movement in the 1950s that used a mix of style and techniques from Chinese pictorial traditions and the School of Paris). This mixed media artwork by Jalaini Abu Hassan, or Jai as he is fondly known, offers a juxtaposition of cultures. The man, depicted in a sarong and a songkok, is a self-portrait of the artist as a bomoh. The bomoh character first appeared in Jai’s Mantera series in 2004.

The bull brings to mind the kerbau of the Malaysian rice fields, alluding to Jai’s bucolic upbringing in Kg Batu Kurau near Taiping, Perak. Upon closer inspection, this is in fact an image from a Chinese halal restaurant. The Chinese characters on the bull read "Front Portion" and "Back Portion". Jai made this artwork after a visit to Beijing. Instead of depicting the buffalo as an animal that has been trained to do work, she chose to highlight its stubbornness.

The whole scene speaks of lack of order, perhaps even anarchy, as the buffaloes fill up the space, looking head on.

But this chaos can only symbolise a means to an end, to achieve a new order perhaps.

This artwork was also used by Malaysian punk band Carburetor Dung for its album Inginku Rejam Raksasa Kejam in 2012. 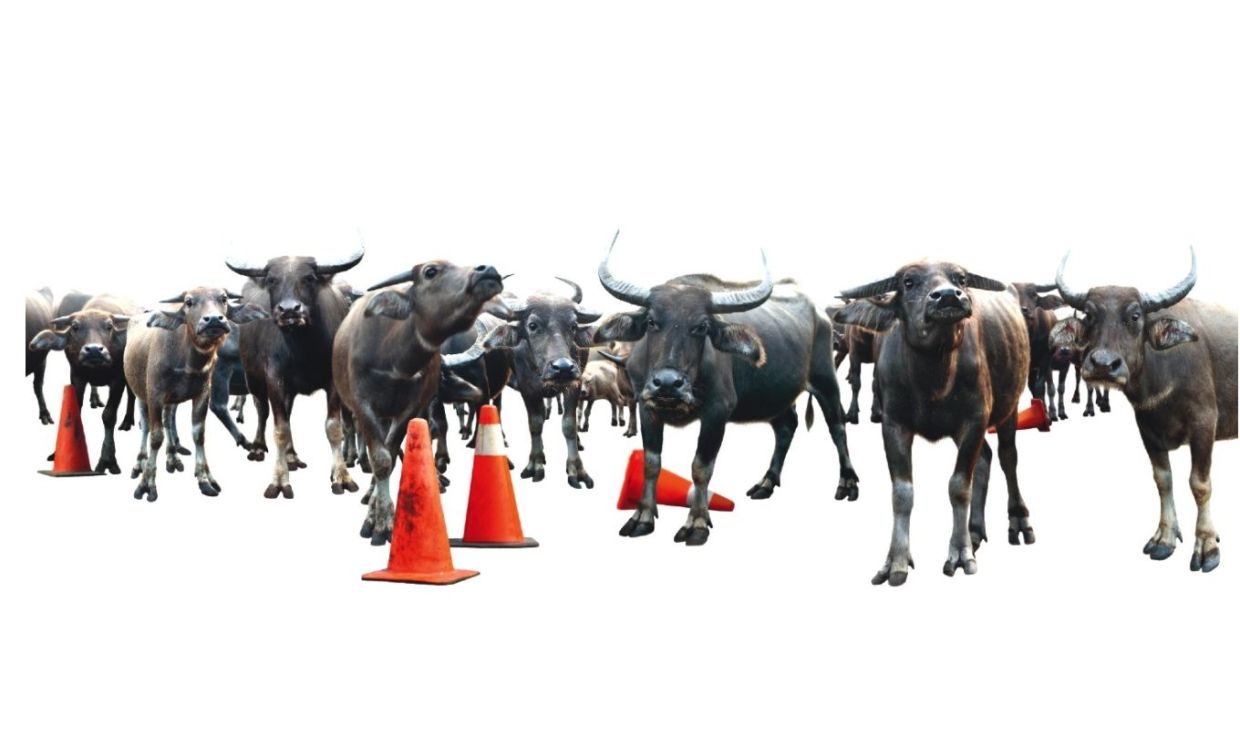 This Johor-born artist is known for his command of a spectrum of media, from charcoal to oil.

His artworks are often of stunning photorealistic still-life paintings and expressive portraits.

Using bitumen on canvas, the artist manages to bring a realness and solemnity to the painting.

This 2009 artwork and its title alludes to one of the main usages of cows in the region - for their meat. It speaks of a food source and a source of income for many. 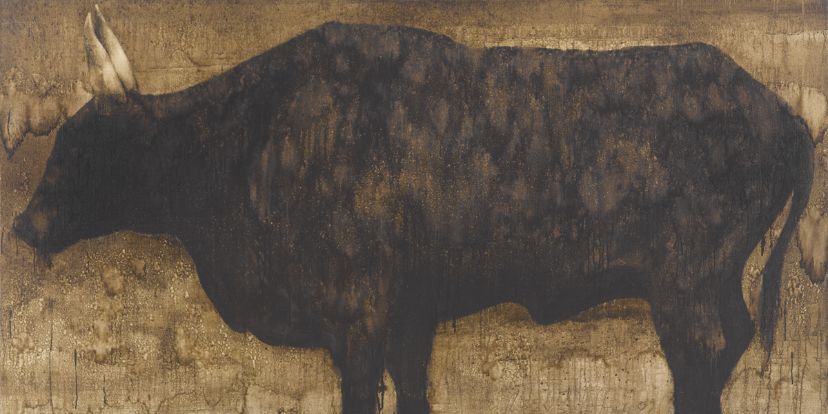 Stephen Menon's The Hierophant - A Self Portrait (2021)

Printmaker Stephen Menon transforms The Hierophant, one of the trump cards in most traditional Tarot decks, by replacing the priest with a crowned cow.

In fact, the cow is a depiction of the Pahang-born artist, seen as stoic and steady. The cow is flanked by two pillars in the background, symbolising law and creed and by two seahorses in the front, symbolising helpers who give him the energy and motivation in life.

This self portrait with earthen hues depicts the artist’s journey in life, moving towards his destiny. Will the bulls come charging in the Year of the Ox?