Dhavinder at one of his abandoned factory 'haunts' in the Jalan Chan Sow Lin area in Kuala Lumpur. Photo: Kenny Loh

Contemporary artist Dhavinder Singh’s idea of a productive work day is coming back to his work studio with a haul of curious rescues, including a large wooden pigeon house, old tools, saws, rusted mailboxes and window frames.

In order to find his subject or inspiration, Dhavinder spends days scavenging about abandoned factories and derelict warehouses in his childhood neighbourhood of Jalan Chan Sow Lin in Kuala Lumpur looking for machine scraps or discarded objects which serve as reminders of a long forgotten way of life.

“I grew up mostly surrounded by factories and warehouses. This corner of Jalan Chan Sow Lin was my home for more than 13 years. My grandparents, who took care of me as a child, were factory caretakers... jagas. They lived and worked in a factory which manufactured sawmill parts, ” says Dhavinder in a recent interview in Kuala Lumpur.

“Machines, cranes and equipment supplies for sawmills were a part of my growing up years.

“I never had a proper playground. I used to run about the factory floor when work days ended. In the factory, my grandfather built a cabin for us to stay in, but it was the factory roof that provided shelter, ” he adds.

Dhavinder, 37, is all too familiar with one of the oldest industrial areas in Kuala Lumpur. Born into a Punjabi family, the Jalan Chan Sow Lin memories have played a big part in his life. Dhavinder's installation called 'Smelting Thoughts' (2020), which features an old wok that his grandfather brought to Malaya from Jalandhar, Punjab, India in the 1950s. Photo: The Star/Norafifi Ehsan

“I never knew what a normal house was until I moved out and lived with my mum (a beautician/seamstress) when I was a teenager. She was a single parent. However, I still remember going back and spending many weekends at the factory with my grandparents... we had birthdays and festive celebrations in the factory compound, the and I can still smell the curry chicken in a big pot being cooked outside by my grandmother using a wood fire, ” he recalls vividly.

For more than 10 years, this British-trained artist has been collecting – and reconnecting – pieces of the past from this largely run-down area now, patiently waiting to reconstruct as much as possible into a unique off-gallery exhibition.

Dhavinder’s Tagistan exhibition, currently showing at a pop-up space behind the Zhongshan building in Kuala Lumpur till Nov 15, is the culmination of all that research and reimagination.

The show is supported by the Cultural Economy Development Agency (Cendana).

Dhavinder, a fine art graduate from the Cardiff School Of Art And Design in Britain, has been slowly building up towards an exhibition like Tagistan, which draws on the emotional force of conceptual art.

“This exhibit really comes together on several levels. They reflect on Dhavinder’s family history, his Punjabi roots in Malaysia and also his artistic experiences, questioning contemporary issues such as gentrification and how urban landscapes are shifting so rapidly," says curator Azzad Diah, who adds a book will be published next year to complement this exhibition. 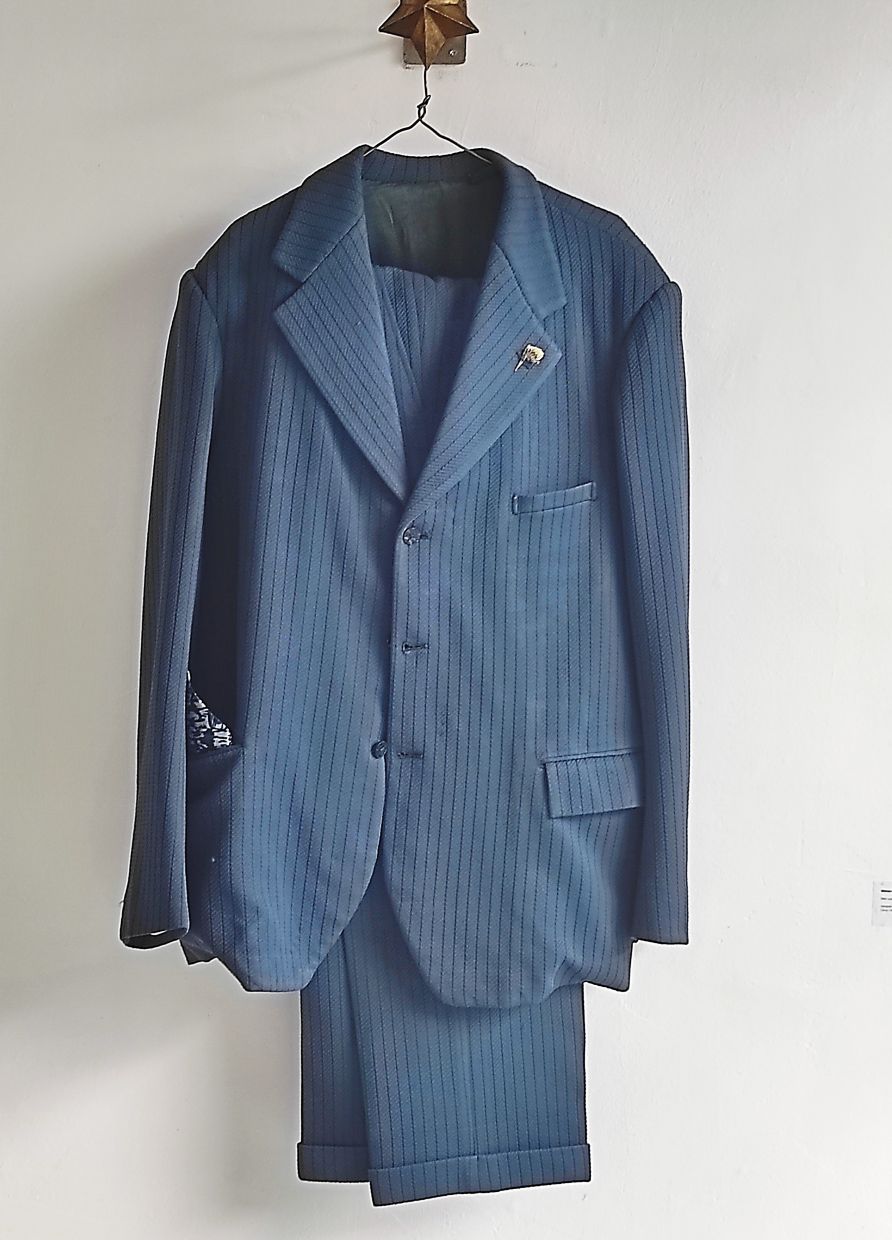 ‘My grandfather loved to dress up and take the family out to the photo studio,’ says Dhavinder about this work titled 'Mohan Singh s/o Karam Singh' (1960s suit). Photo: The Star/Norafifi Ehsan

"This Tagistan project involves many years of Dhavinder’s personal research that has been sought out, gathered and restored, ” he adds.

For Dhavinder, the human stories from the city's vanished neighbourhoods needed to be told. And he had many from his own experiences staying in a factory address called Nam Hing Engineering Sdn Bhd.

Tagistan is where the artist is striving to embrace something more than just physical buildings. He has become a storyteller, remembering a community of multi-cultural factory life characters and residents.

Dhavinder adds that this new Tagistan exhibition is also largely informed by “arte povera” – a radical Italian art movement from the late 1960s to 1970s whose artists explored a range of unconventional processes and non traditional “everyday” materials.

Tagistan has its fair share of unconventional. The word “Tagistan” is inspired by an obscure “Dutch/Indonesian” word “tagi”, loosely translated as “storage” and “-stan”, a suffix usually referred to as “place”. The wordplay lends itself as a sense of longing towards a distant place once called home.

The (empty building) layout for this Tagistan exhibition is a surprisingly welcoming one, giving visitors the chance to view old world industrial space relics and family belongings as well as to understand the stories behind them. The full-time artist doesn’t crowd the space, giving the exhibit a minimalist feel.

The wooden pigeon house gives us a glimpse of how factory workers used to relax and make time for pets, while Dhavinder’s grandfather’s kitchen utensils brought over to Malaya from his home in Jalandhar, Punjab, India in the mid-1950s offer a personal narrative of a migrant setting sail to Malaya in search of a better life. Dhavinder explaining a work called 'Disciple Visits The One Who Floats' (2020), a tribute to his late grandmother. It features her old charpoy bed, tin cup and rug blanket. Photo: The Star/Norafifi Ehsan

“My late grandfather used to love to dress up smartly and take the family out to the photo studio in downtown KL. This suit reminds me of a proud and caring man, who was always there for his family and friends, ” says Dhavinder, who mentions that his grandfather used to also help out newcomer migrants from Punjab who arrived in KL.

“Mohan Singh used to arrange places to stay for new arrivals from Punjab, and he was also part of the ‘kutu fund’ (monetary scheme) committee in the factory. In the day, he was a (JKR) lorry driver, and at night, he took care of the factory. He worked all his life, ” he adds.

For Dhavinder, who started his art career in 2008, this fourth solo exhibition’s strength lies in the small and personal details.

His tribute to his grandmother, giving her an exhibition “room” using her charpoy bed (a traditional woven bed) as an installation, with her old rug blanket and tin cup, among the exhibits, is a heartwarming gesture.

“She never had her own room in the factory. She used to sleep on her charpoy bed near the heavy machinery. A jaga’s wife never complained, she just went on with life, ” says Dhavinder. He also salvaged her kitchen window, which can be seen in the installation Smelting Thoughts.

Unlike Dhavinder’s previous shows, this current exhibition is broadly more accessible to the masses. He has discovered a way to harness the power of memories, symbols that come within them and past experiences.

The “black sheep” altar work, which is another Tagistan highlight, shows Dhavinder’s ability to look into his own past. He places himself in the middle of his creative process, shedding light on a “bad boy” image and certain societal prejudices he faced through the years.

“People can read that the artist might be the main subject. But I prefer to see it as something of a combination... where art and my own life experiences merge for the creative end, ” explains Dhavinder, pointing to his tattoos and being often stigmatised for having them.

The discussions found in this Tagistan exhibit are many things: a family history, cultural time capsule, a tale of migrant resilience and also, entire urban neighbourhoods being destroyed by regeneration.

All together Dhavinder has made them a whole, offering a new (old) world to the audience.

Tagistan is showing behind the Zhongshan Building (new wing, temporary space), off Jalan Kampung Attap in KL till Nov 15. No walk-in visits, strictly by appointment only. Call: 016-216 4373. Visit: dhavindersingh.com. The artist will participate in an online tour on Nov 7 at 2pm, more details here. 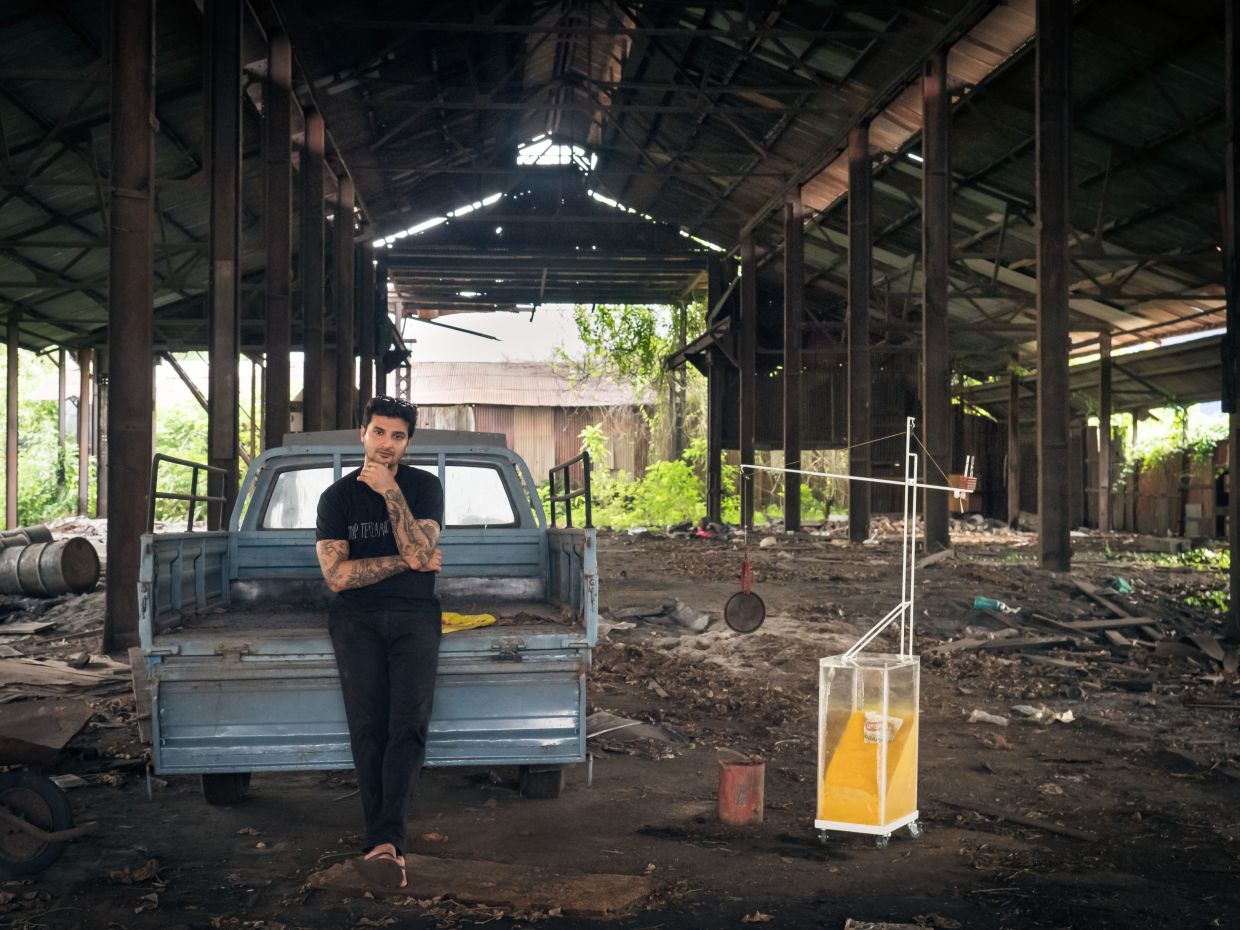 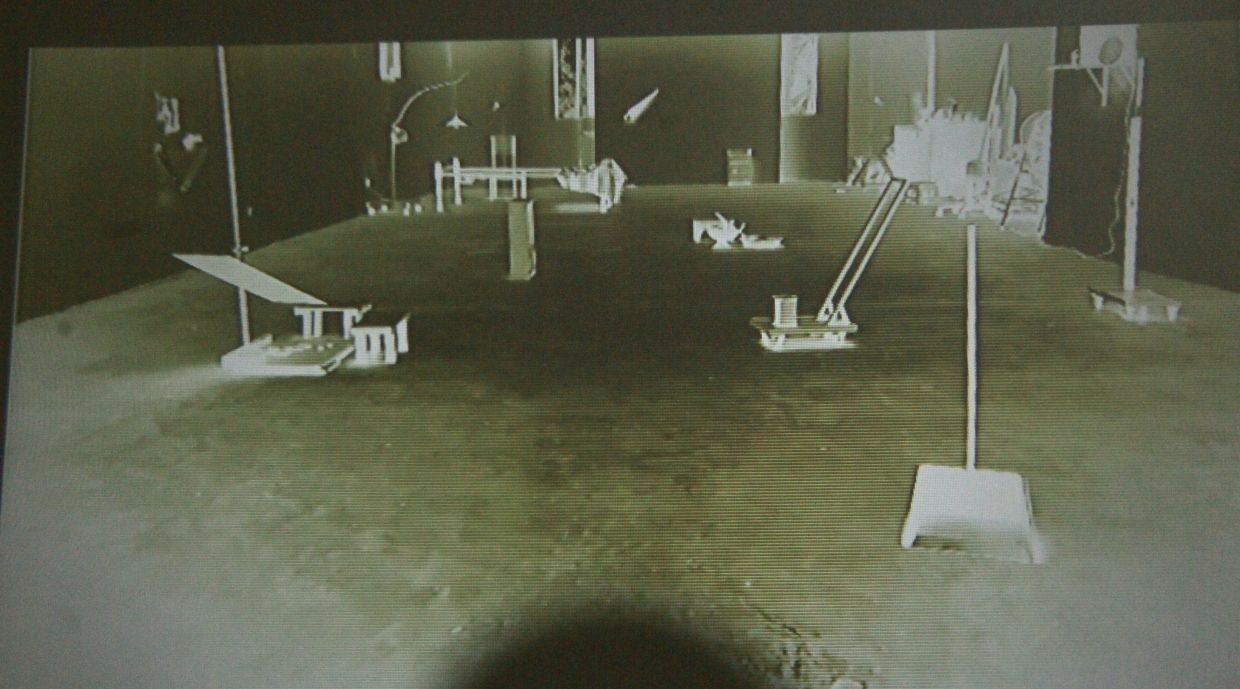 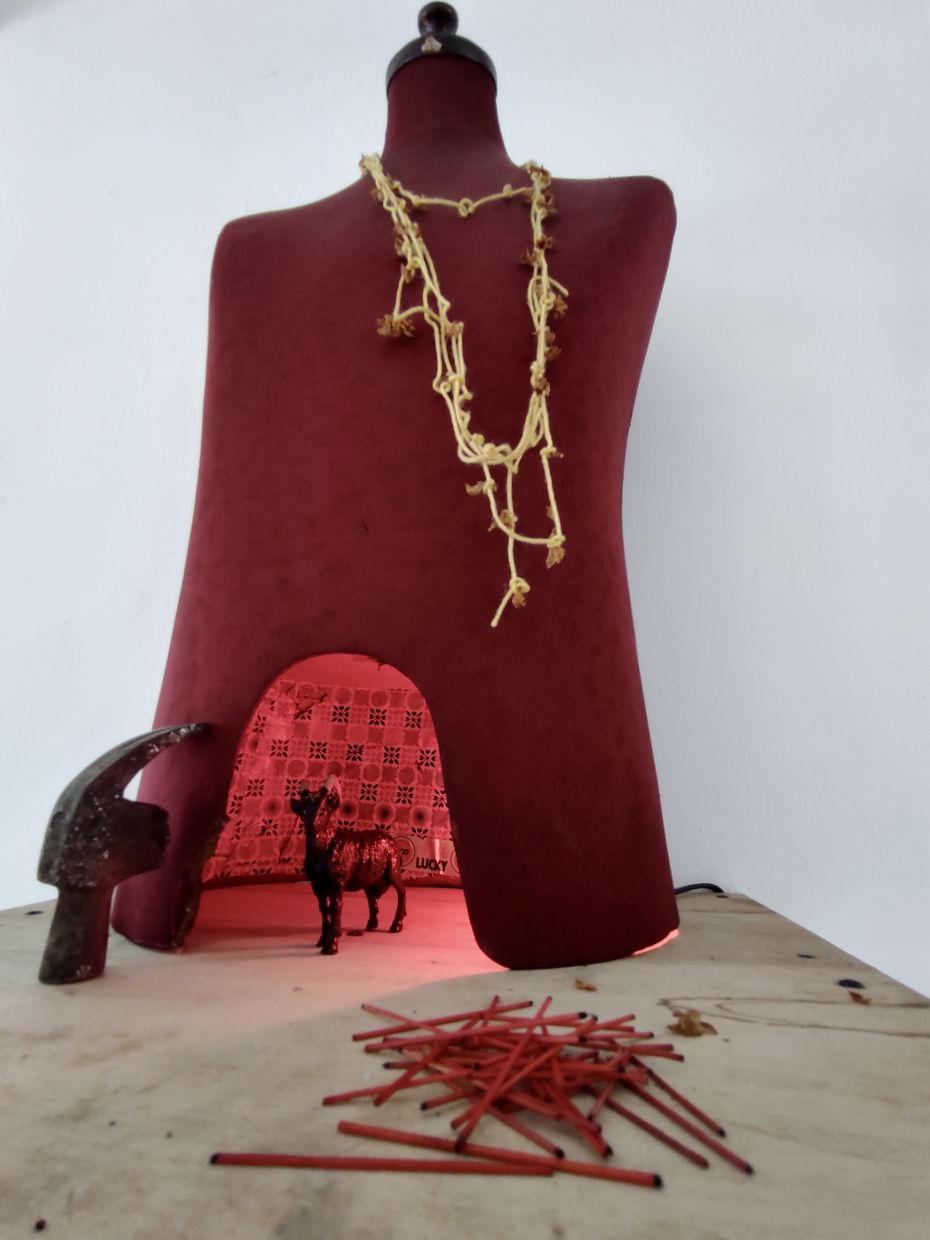 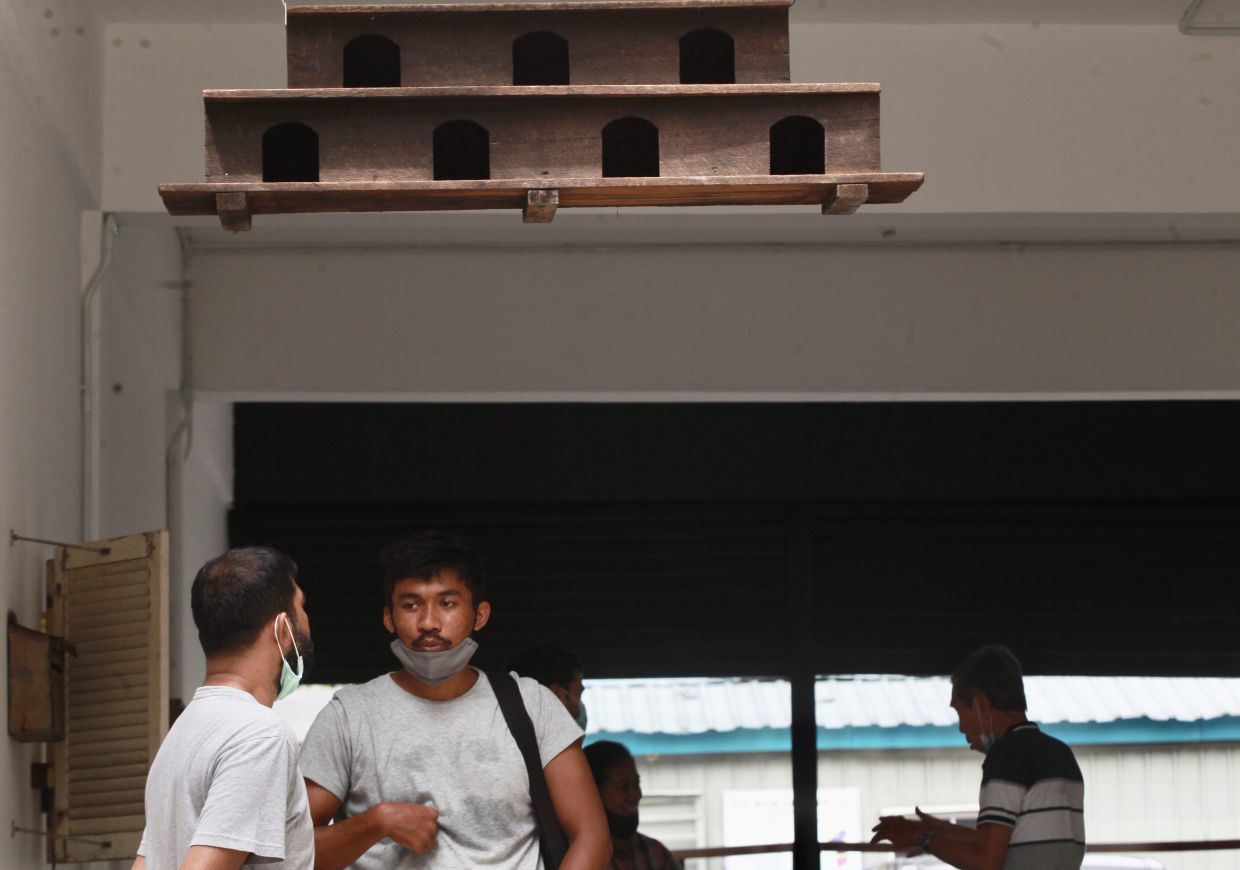 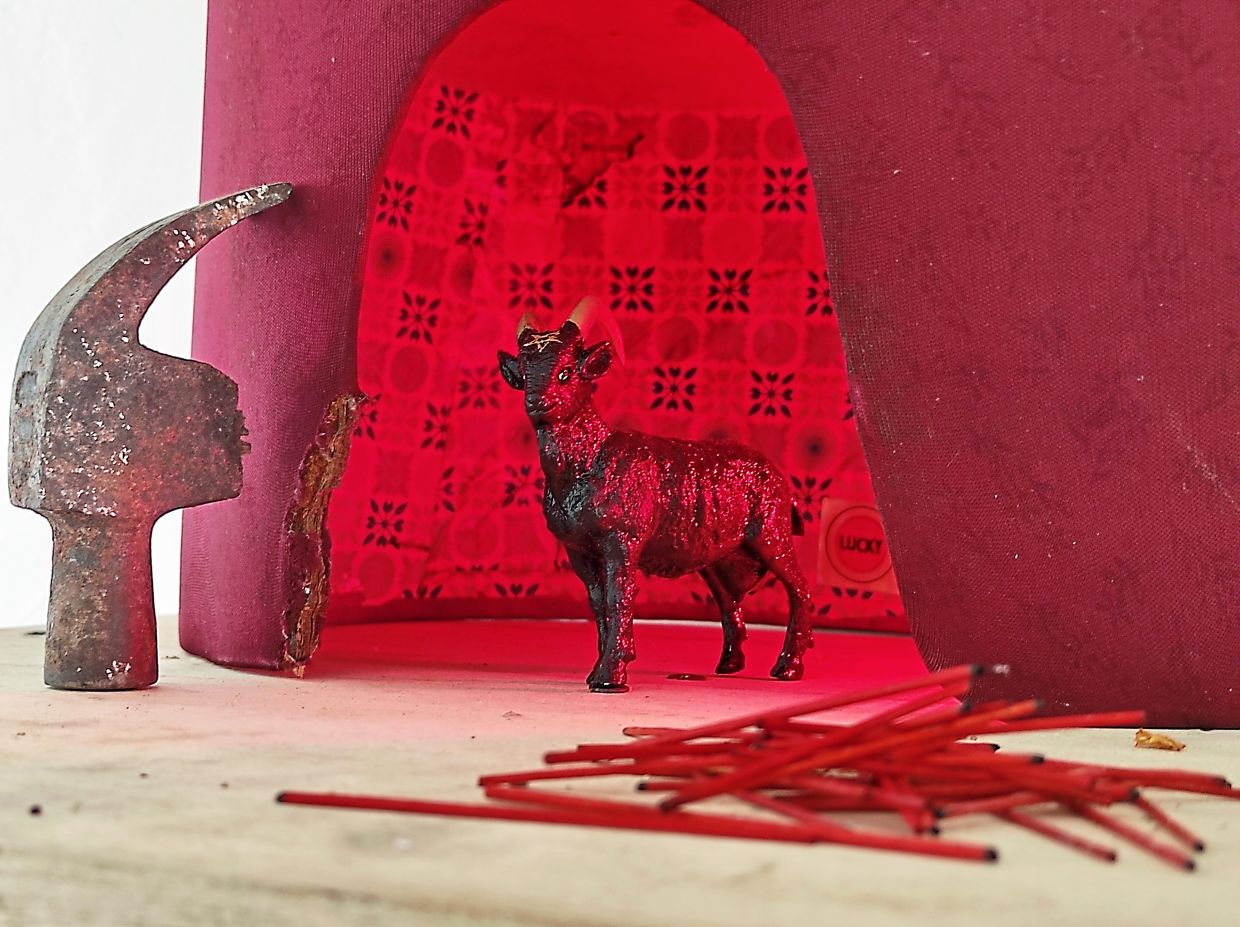 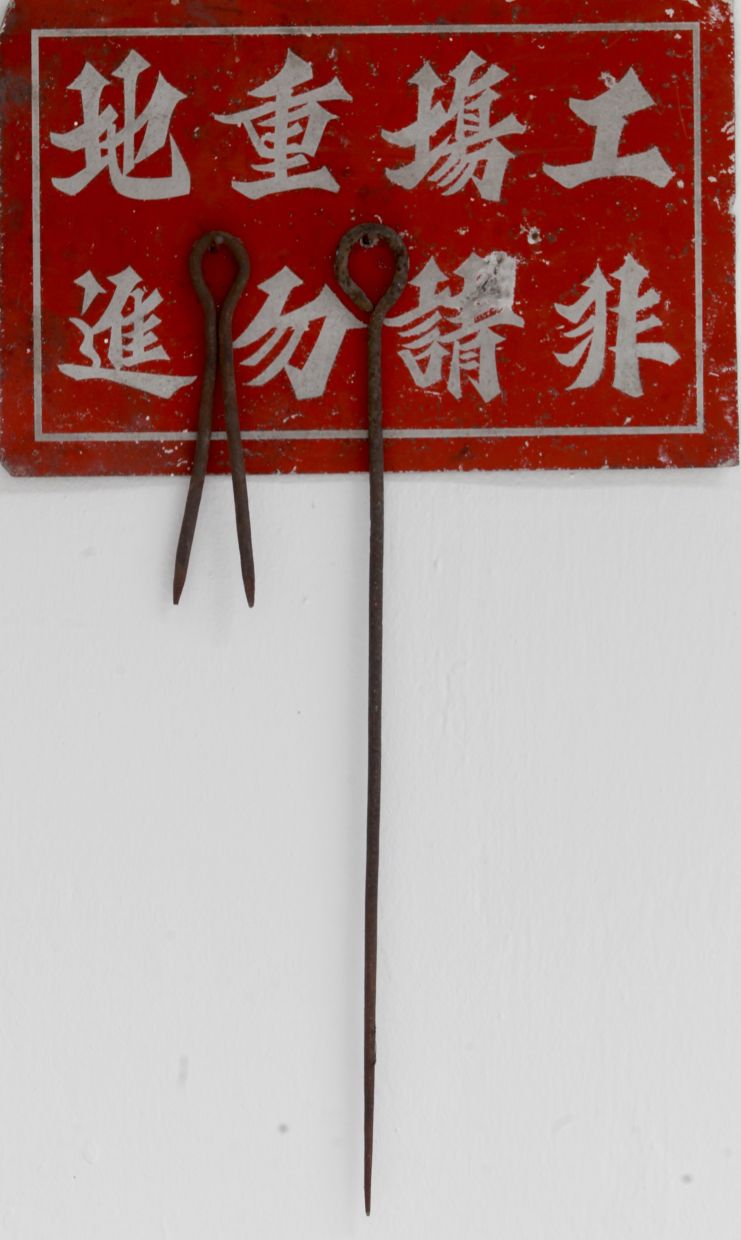 Dhavinder at one of his abandoned factory 'haunts' in the Jalan Chan Sow Lin area in Kuala Lumpur. Photo: Kenny Loh

'I picked up some video skills from YouTube, ' says Dhavinder on the DIY stop-motion video he made while finishing the 'Tagistan' exhibition during the lockdown period in Malaysia. Photo: The Star/Norafifi Ehsan

Dhavinder's installation 'An Alter in Mind, Who Should You Worship? Not Implicating That You Should, But Would You?" (2020). Photo: The Star/Norafifi Ehsan

Dhavinder's installation called 'Smelting Thoughts' (2020), which features an old wok that his grandfather brought to Malaya from Jalandhar, Punjab, India in the 1950s. Photo: The Star/Norafifi Ehsan

A wooden pigeon house salvaged from a factory in Jalan Chan Sow Lin is seen at the Tagistan exhibition by Dhavinder Singh. Photo: The Star/Norafifi Ehsan

Dhavinder explaining a work called 'Disciple Visits The One Who Floats' (2020), a tribute to his late grandmother. It features her old charpoy bed, tin cup and rug blanket. Photo: The Star/Norafifi Ehsan

A close-up of Dhavinder’s installation 'An Alter In Mind, Who Should You Worship? Not Implicating That You Should, But Would You?' (2020). Photo: The Star/Norafifi Ehsan

‘My grandfather loved to dress up and take the family out to the photo studio, ’ says Dhavinder about this work titled 'Mohan Singh s/o Karam Singh' (1960s suit). Photo: The Star/Norafifi Ehsan

A close-up of Dhavinder's installation called 'Smelting Thoughts' (2020), which features an old wok that his grandfather brought to Malaya from Jalandhar, Punjab, India in the 1950s. Photo: The Star/Norafifi Ehsan