Spark in the dark: dancer and pianist strike a chord with their virtual film collaboration

We know what it is like to sing in the shower. But what about “dancing” in the bathtub? And with a wine glass in hand?

This is one of the scenes from the rather haunting Soliloquy: A Dance Film, a virtual collaboration between dancer-choreographer SueKi Yee and pianist-composer Rachel Morais.

What came first? In this case, it was the music.

“When I first heard Rachel’s Soliloquy, I sat very still and held my breath for a moment. The music immediately moved me in ways I could not immediately identify. It felt lonely and intimate, yet so powerful at the same time. It is like staring into a mirror when you are alone in a room, trying to recognise yourself, ” says Yee.

Referencing the word soliloquy, which means the act of speaking one’s thoughts aloud, this collaborative dance project draws on Morais and Yee’s thoughts and experiences that revolve around this idea.

When they sat down, virtually speaking, and started exploring all that it could be, what emerged was a discussion on how the act of immersing themselves into their art – Yee with dance, and Morais with music – is like having an ongoing soliloquy.

Yee, who hails from Penang, is an Aswara dance graduate and was a soloist with ADC Malaysia (ASK Dance Company) from 2016 until 2019. 'I associate 'Soliloquy' with fragility and vulnerability coming face to face with the thoughts and feelings that one faces. I see a version of the self I once was,' says Brisbane-based pianist-composer Morais. Photo: Beth Hughes

Her solo piece But Would You Know If A Fishbowl Is Just A Fishbowl? was performed at various festivals in KL, Penang and Johor, as well as at the International Solo Contemporary Dance Festival Cuerpo al Descubierto, in Mexico last year.

Morais grew up in Malaysia and is currently based in Brisbane, Australia. Her Soliloquy is one of the tracks on her neo-classical influenced Order In Chaos album, which was released earlier this year.

“It is this process of trying to figure out what we want, to understand why we do what we do, and where to go from here. We also talked about how this can be terrifying, because you are confronting yourself, which includes the parts you like, along with other parts you may not. So for the dance film, I imagined something with an intense vibe, maybe a little brooding,” says Yee.

Soliloquy: A Dance Film switches between scenes of Yee dancing in a dimly-lit room, holding a candle in front of a mirror, and sitting in a bathtub with a wine glass in hand; as well as Morais on the piano.

“These scenarios illustrate the different processes in a soliloquy: trying to ‘look’ at yourself more clearly, sitting alone with your thoughts, the frenzied attempts in trying to make sense of things, spacing out and so on,” she says.

How fitting then that Soliloquy: A Dance Film was created while most of the world was in quarantine or lockdown, because of the pandemic.

The dance film is a unique project to Morais, not only because she is based in Australia, and Yee in KL, but it served to get them to think and create outside the box.

"Working with SueKi in creating Soliloquy: A Dance Film was no effort at all! It was definitely uncharted territory for me as in my mind, I had envisioned SueKi dancing to my music but not in the manner that it has turned out to be," says Morais.

"It has been a pleasure making art with her and having her dance to Soliloquy. Making it her own through dance and imagery truly has been an honour. I hope that people will not only enjoy our film but be moved in a way that provokes them to sit with themselves, hear their thoughts and face them," she says.

Yee recalls how having to work from home meant they had to get creative with whatever they had around them.

In a pinch, blankets could be used as light filters. Flood lights were ordered online.

No technical equipment? Yee recruited her brother Heng Yeh, who was willing to experiment with different ways of shooting her scenes.

“And Rachel engaged a friend Beth Hughes, who helped her shoot her scenes and edit our dance film. Neither of us have much experience in production, so it was both exciting and challenging for us to consider how we want to shoot the film. Suddenly we were not only a musician or a dancer, but we also had to figure out the storyboard, camera angles, the set up or scene, the lighting and so on. You don’t have a lot of options during quarantine!” says Yee.

This project was realised with the support of Cendana’s Create Now Fund, a programme that aims to reach out to the arts and culture sector that has been affected by the pandemic.

“Funds for artistic projects or arts organisations are so important right now to sustain our industry. Many projects and events have had to be cancelled, many artists have lost their jobs or source of income. We were fortunate to have received Cendana’s Create Now Fund to put this project together,” says Yee.

“Collaborating with Rachel was such an exciting process, because we both felt strongly about our vision. It was a very hands-on process: we made all the decisions and had total freedom to try out our ideas. Brainstorming for what felt like a ‘dream idea’ and then seeing it come to life ... now that was very gratifying,” she says. 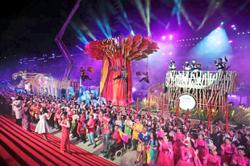