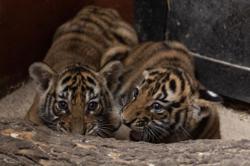 Malayan tapirs can grow to between 1.8m and 2.5m in length. This public service announcement poster about social distancing by Cultkids takes inspiration from that fact. Photo: Cultkids

It is black, it is white and it hunts by moonlight. Mainly active at night, the tapir is often mistaken for anteaters or wild boars, even though it is more closely related to rhinos and horses.

The Malayan tapir, the largest of all tapir species, is native to Asia. Often overshadowed by other animals in the public eye, it does not enjoy the same cuddly status as the other black and white creature we all know - the panda.

This herbivorous mammal is born with white stripes and spots - it is only the adults that have the distinctive black and white markings that we are familiar with.

As we gear up for World Tapir Day (celebrated on April 27 each year), here's a chance to take a look at some creative tapir art and design - recent and past - in Malaysia.

In one of the vintage posters in the Poskad Untuk Rakyat PSA series by graphic designer Cultkids, a tapir fills the imaginary space between two individuals practising social distancing.

Excluding its tail, the Malayan tapir can reach up to 2.5m in length, although Cultkids has borrowed from the more-commonly quoted recommended distance of one metre and placed “a young tapir” centre stage in this piece.

“When you practice social distancing, just imagine there’s a Malayan Tapir between you and the next person, ” he posted on FB (cultkidsstore).

In celebration of World Tapir Day on Monday, streetwear apparel brand Tarik Jeans’ Tapir Day promo on their Modern Nostalgia collection is accompanied with a tapir poster. This is a collaboration between Tarik Jeans and Volkswagen. Part of the proceeds will go to the Kenaboi Forest Reserve in Negri Sembilan. Sabah-based art collective is Pangrok Sulap is no stranger to artworks touching on environmental issues and conservation.

For World Tapir Day, it has designed a woodcut print showing a deep jungle habitat with a small group of tapirs grazing. Rizo Leong, one of the founders of Pangrok Sulap, also reminds us that the tapir is extinct in Sabah (and Sarawak), and that fact serves as a lesson to create broader awareness in protecting this endangered species in other parts of Malaysia.

"We have seen the effects of deforestation and how the destruction of jungles have eliminated entire ecosystems. Things will only stop if people's attitude towards Mother Earth change. We are already seeing how the Covid-19 pandemic is shifting the world's balance. We need to learn from these hard lessons," says Leong. A national symbol of diversity

A familiar presence at pop-up markets and other events, MUOC - which stands for Malaysian Unity of Cultures - has an adorable tapir and its young as its logo. The brainchild of Yew Souf, MUOC was founded in 2014 and embraces cultural diversity in Malaysia as it does the unique and unusual appearance of the tapir.

“The Malayan Tapir has a flexible snout like an elephant's trunk, ears of a horse, legs of a hippo and a body of a pig. It is an iconic creature that perfectly epitomises Malaysia, a nation of cultural fusion between different races, ” says MUOC in a statement.

For three years running now, MUOC has a programme each year where all funds from the sale of Yew’s handcrafted ceramic tapirs are channelled to the Sungai Dusun Wildlife Conservation Centre in Selangor, which houses a Malayan Tapir centre. Last year’s lively Tapirama group exhibition in KL paid homage to the Malayan tapir through a series of paintings, prints and more. With the objective of spreading awareness about the tapir, this exhibition featured the works of Ida Sri Sulo, Nur Azmi Mokhtar, Abby Zain and Lal Mural, among others. This was a collaboration between the Malaysian Nature Society (MNS) and art group Garis Warna.

Part of the proceeds from artwork sales went to the MNS’s ongoing conservation, education and public awareness efforts. Another series would be most welcome this year. The day the tapirs took over a mall

In 2016, thousands of clay tapir figurines created by schoolchildren around Malaysia made an appearance at Publika in Kuala Lumpur as part of the Malayan tapir awareness campaign.

As a nod to the number of surviving tapirs then, each of the miniature tapirs represented one of the surviving 3,000 Malayan tapirs. These figurines were on display for about three weeks at the Boulevard in Publika, complemented by activities such as storytelling sessions, as well as tapir origami and sculpture workshops. There was also a sand sculpture by Ikhwan Saloot and larger tapir sculptures made of bamboo and cloth.

In terms of a public awareness campaign, this one was a winner. The Malayan Tapir Awareness Campaign 2016 where 3,000 Malayan tapir clay figurines made by schoolchildren across the country were exhibited at Publika in Kuala Lumpur. Photo: Filepic

Working from home? Malaysian artist pencils his way through this new reality