Recipes for the vegan foodie

There seem to be a growing number of vegans in Malaysia. Photo: WENDY WEI/Pexels

AS I write this, I am just getting over an experience that will be hard to forget.

I tried making vegan cheese. Searching through online recipes, the one with the most easily available ingredients was for mochi cheese or vegan mozzarella. It contains non-dairy milk, flavourings such as nutritional yeast and onion powder, tapioca starch for stretchiness and agar-agar as the setting agent.

The process turned out a gooey blob that looked similar to what was in the video. To become “cheese”, the mixture was left to set in a plastic container.

The final result, however, was nothing like the video, which were firm blocks that looked like hard cheese. Mine had a pudding-like consistency.

But the worst thing about it was the taste. I’ve never had commercial vegan cheese, but I know it cannot taste nearly as bad as whatever it was I had made.

This brings me to the reason for the subject of this article: vegan recipes. 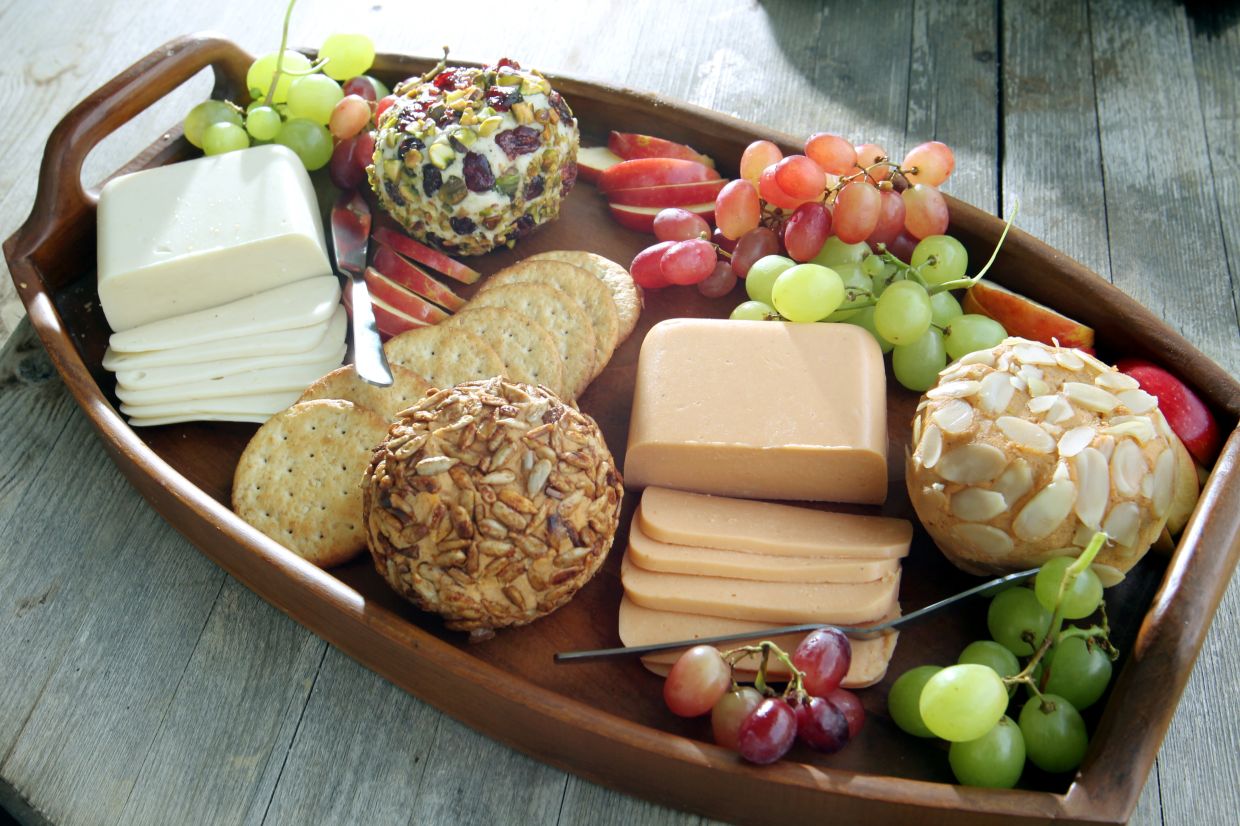 Vegan cheese can be tricky to make. Photo: Filepic

I ditched meat and dairy for a week and ate only vegan food. It was simply a way to change things up a bit while #stayinghome during the still-raging pandemic.

My diet is mostly plant-based and I eat vegan more often than not, even if I don’t plan to. Meat is easy to give up; it’s harder with dairy – hence the whole vegan cheese fiasco. (Even thinking about the taste makes me shudder.)

There aren’t any statistics – official or otherwise – on the number of vegans in Malaysia, but there must be interest judging from the growing number of eateries specialising in vegan food as well as commercial products in recent years.

Tofu is usually the first ingredient that comes to mind in vegan cooking. Just for fun, I’ve excluded it from any of the following recipes. Nor do they contain any of that fake/mock – or the posher version, faux – stuff. These are words that should never be tagged on to meat. 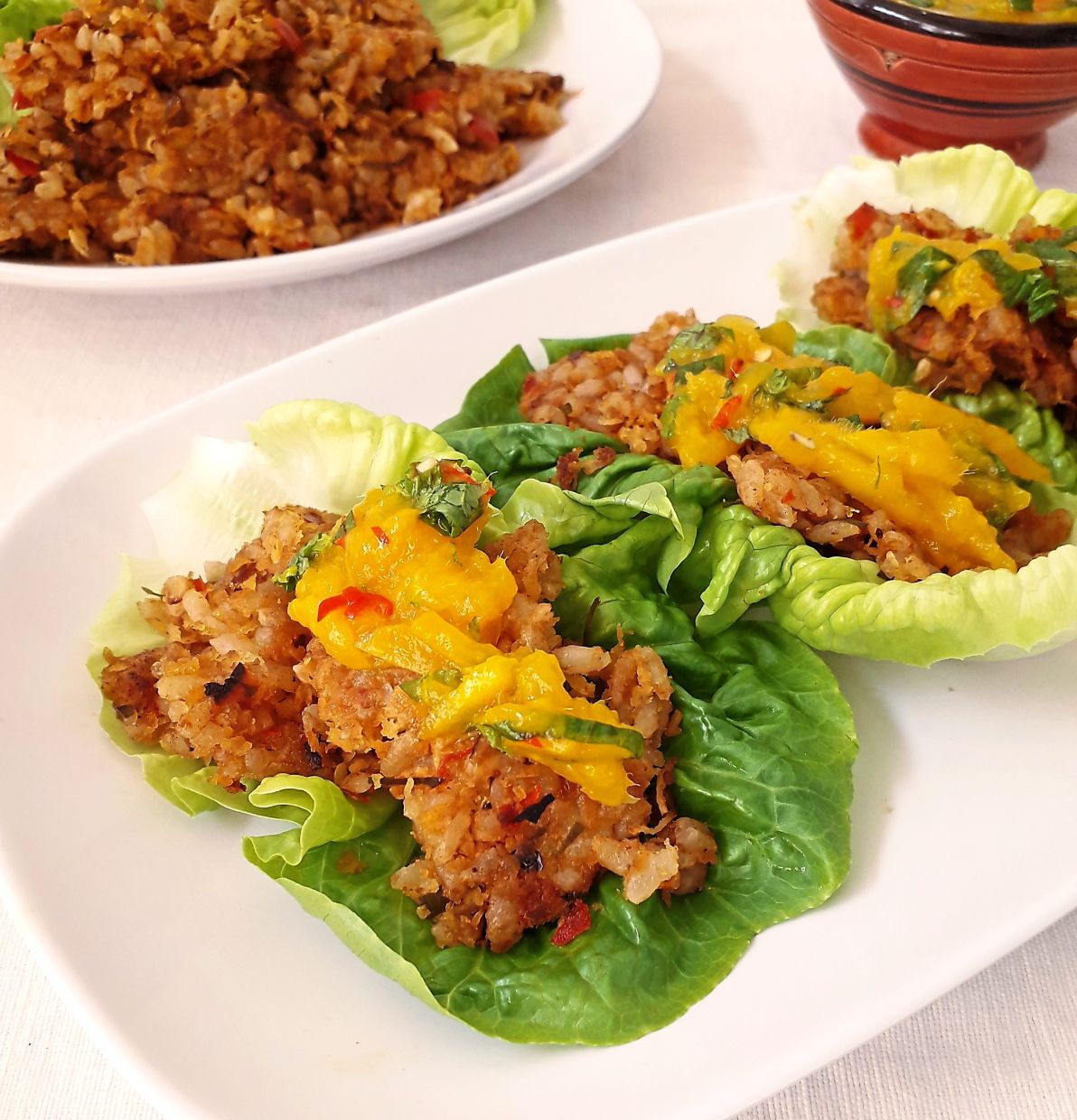 One of the things that’s often missing from vegan cooking is the crunch and texture that comes from animal fat and flesh. This vegan version of Nam Khao, a popular Lao appetiser, tries to remedy that.

In the original dish, cooked rice is mixed with red curry paste (which often contains shrimp paste), coconut and egg, formed into large croquettes and deep-fried. To serve, the balls are crumbled, and mixed with dressing, salad ingredients and soo moo (fermented pork sausage).

Here, instead of deep frying, the rice mixture is cooked like a pancake so that there is more surface area to crisp.

1 tbsp palm sugar, or to taste

Heat a frying pan on medium high. Add the dried and fresh chillies, garlic and shallots. Toast the ingredients, stirring constantly, until lightly charred in places. Transfer the ingredients to a blender.

Add the remaining ingredients except the oil. Add a splash of water. Blend into a rough paste.

Heat the oil and fry the paste until aromatic and the oil has risen to the surface. Taste and add more tamarind, sugar or salt as preferred.

This will make more sambal than required for the crispy rice recipe. Store the rest in an air-tight jar in the refrigerator.

Place the sambal in a large bowl. Add the rice and stir well to combine. Stir in the coconut, kerisik and kaffir lime leaves. Add salt.

Heat a frying pan. Add just enough oil to cover the base. When the oil is hot, pour it off into a heat-proof bowl. Set aside to be used again later.

Scoop one-third of the rice mixture into the pan and spread it into a disc like a pancake. Over medium heat, cook the bottom until crisp and lightly golden.

Place a plate over the rice pancake and flip the pan over. Slide the pancake back into the pan to brown the other side. When crisp, transfer to a plate.

Heat up the oil that was set aside earlier. Repeat process with the remaining portions.

salt and sugar, to taste

Break the rice into chunks. Stuff into a lettuce leaf and top with mango relish. There’s a well-known brand of instant ramen that I like because of the texture of the noodles and taste of the soup. The powdered seasonings are good but it’s those little packets of flavoured oil that level up the deliciousness.

I particularly like the one that comes with the ”rich roasted garlic flavour”. At first, I thought it was made with fermented black garlic, but then found out that it is actually mayu, made with garlic cloves that are slowly cooked in oil until black or burnt.

Use garlic cloves that are around the same size so that they all cook at the same time.

In a small sauce pot, heat the vegetable oil. Add the garlic cloves and cook on medium low. Keep the garlic moving. Cook until the garlic darkens to a very dark brown, about 10 minutes. The cloves will turn almost black (they look like well-toasted almonds).

Transfer the oil and garlic to a blender and puree until smooth. Pour into a jar and stir in sesame oil and salt. Screw on the lid. The oil can be stored at room temperature. Stir well before using.

1 tbsp miso paste, or to taste

Bring the water to the boil in a pot and add the kombu and mushrooms. Turn the heat down, cover the pan and cook until tender.

In a small bowl, dissolve the miso paste with 1-2 tablespoons of stock and add to the pot. Bring back up to the boil and turn off the heat.

Remove the kombu and mushrooms. Slice thinly and set aside for serving.

Combine all the ingredients in a serving bowl.

vegetables and garnishes of choice (blanched if necessary)

Cook the dried noodles in boiling water and drain.

Pour the stock over the soup base in the serving bowl. Add the cooked noodles. 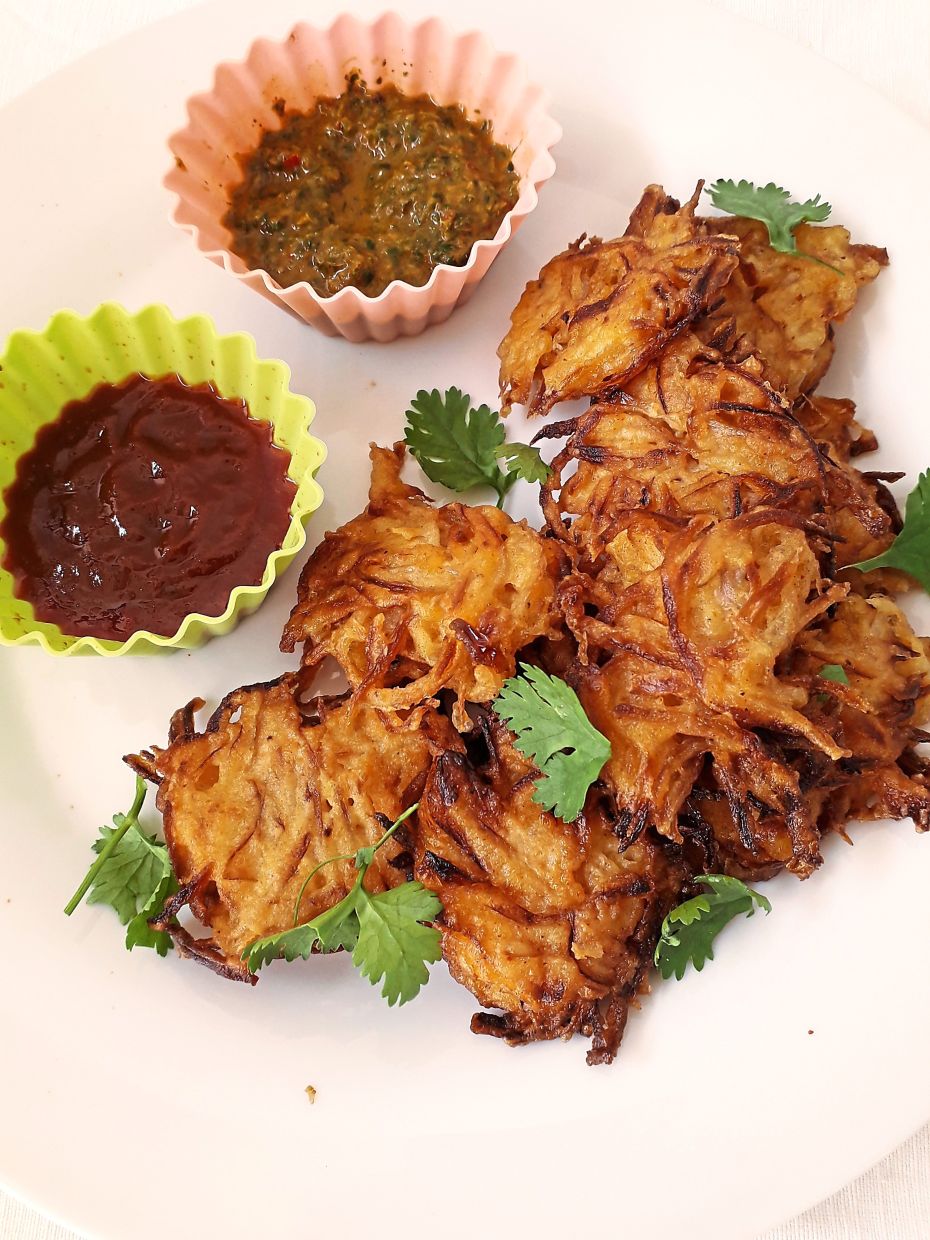 While egg is often used as a binding agent in batters, these fritters stick together with good old flour and water.

Soak the sliced onion in water for 10 minutes.

Combine the flours, turmeric, chilli powder, salt and pepper in a large bowl.

Drain the onions and squeeze out as much liquid as possible. Add onions to the dry ingredients. Toss the onions until well-coated in the flour mixture.

Add about 1/4 cup water and stir the onions together. Add more water, a little at a time, until you get a moist mixture and a scoop of onions holds together in a loose bundle. You may not need the whole 1/2 cup of water.

Heat 1cm of oil in a frying pan. Scoop a tablespoon of onion mixture and drop it into the oil. Repeat. Do not crowd the pan. Over medium high heat, cook the fritters until the bottom is golden (about 1 minute), then turn over and brown the other side. Drain on kitchen paper. 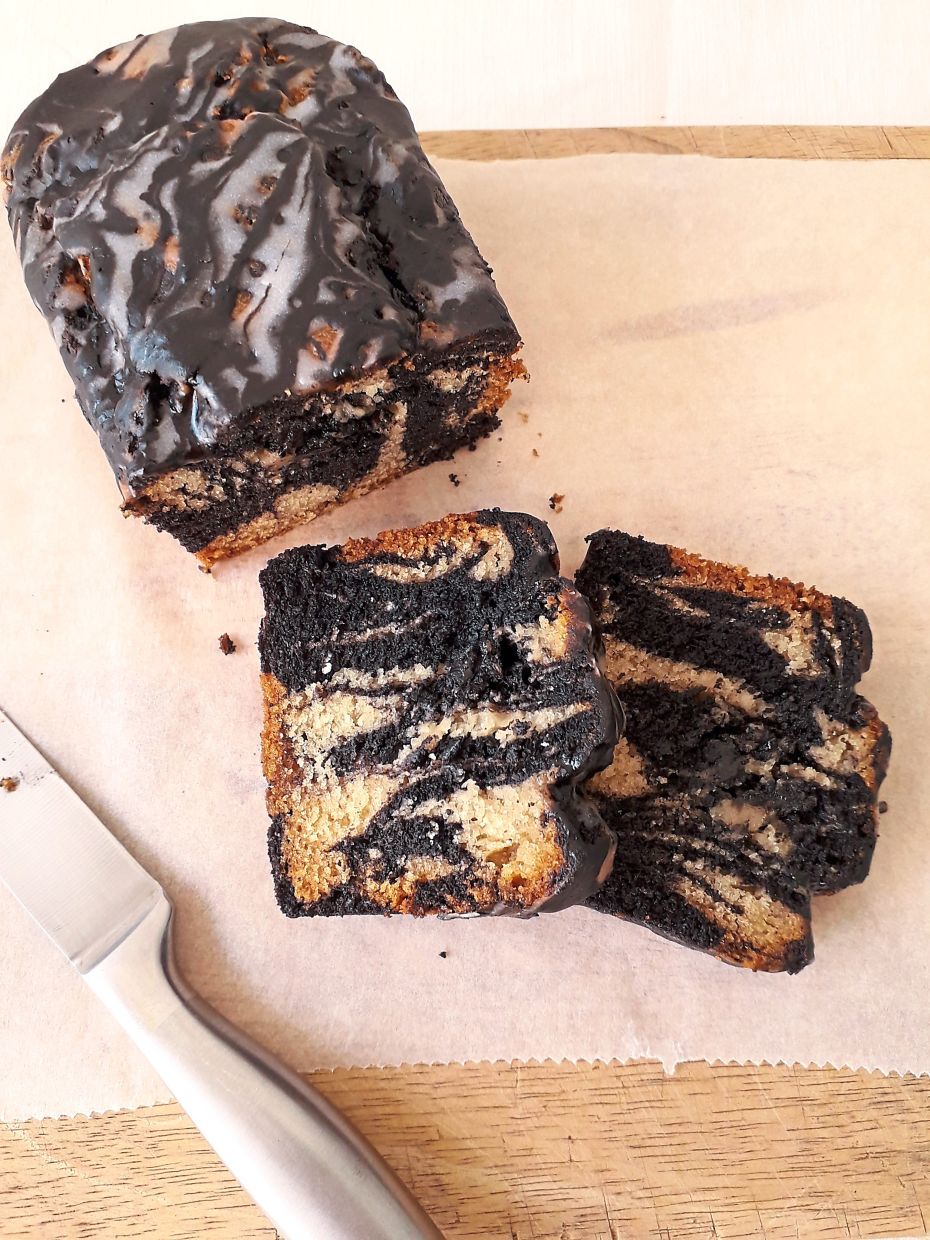 This cake is made with vegetable oil and non-dairy milk (I use coconut milk). It also contains golden syrup (I use Lyle’s, which is vegan-friendly; check the brand you use). For a non-vegan version, substitute with honey.

While reading up on vegan cooking, I found an interesting piece of information: Not all sugar is vegan-friendly. In the refining process that is sometimes used, bone char (the charred bones of animals) may be used to filter out any material that would stop the sugar looking so white.

Malaysian sugar refineries, however, are bound by halal standards and it is highly unlikely that bone char is used. Here’s a link to a statement from a local sugar refinery pertaining to this matter. If in doubt, check the pack for the halal logo.

I was going to drizzle the cake with an icing sugar glaze, but I found out that some brands contain powdered egg white.

The flavour of the cake can be adapted to taste (see notes below). It is best made a day before serving and stored in an air-tight container in the refrigerator.

The cake has a dense crumb, similar to muffins. The recipe makes a small portion but is easily scaled up to fit a 20cm by 10 cm loaf tin or 18cm round tin by doubling the quantity of ingredients.

Combine non-dairy milk, oil, syrup and extract and add to the dry ingredients. Whisk until smooth. The batter should have a dropping consistency.

Mix the cocoa powder with 1 tbsp water or non-dairy milk. Stir into one portion of batter until well combined.

Scoop dollops of batter alternately into the prepared tin. Zigzag a butter knife or skewer through the batter – not too much or you will lose the marbled effect.

Bake for 21-25 minutes until risen and the top springs back when pressed. A toothpick inserted in the centre should come out without any crumbs sticking to it. Cool in the tin for 2 minutes, then turn out onto a wire rack to cool.

For a vanilla cake, leave out the cocoa powder. Or add food colouring. Make this a whole chocolate cake by sifting 1 1/2 tbsp of cocoa powder with the flour.

The cake can also be made in an 15cm round tin. Bake for the same length of time as the sandwich tin. It will also fit six 1/3 cup-capacity cupcake tins. Line tins with paper liners. Bake for 12-15 minutes.