CNY dishes in the comfort of home CHINESE New Year is best celebrated with close ones be it spending time together at home or enjoying a feast at a restaurant.

As communal dining is prohibited during the movement control order period, Grand Imperial Restaurant has customised its Chinese New Year menu for families to partake in.

As the 10th branch and the latest addition to the Grand Imperial Group, Grand Imperial Restaurant at The Club, Bukit Utama in Petaling Jaya is offering a variety of set menus this Lunar New Year.

“The Chinese New Year menus cater for takeaway where the food can be heated up easily without compromising on flavour.

“We want to bring the experience of dining in the restaurant to customers’ homes, ” said Group Business Development manager Maggie Chow.

Launched on Dec 21 last year, the restaurant at The Club, serves a myriad of Cantonese dishes.

Its Platinum Ballroom featuring a five-star hotel ballroom concept can accommodate up to 1,000 diners.Catering mainly for wedding banquets, the ballroom is equipped with a musical fountain at its stage which is fitted with vibrant lighting.

Customers can look forward to four different festive menus, starting from RM308nett, in the MCO 2 takeaway set for four. These are available until Feb 26 between 11am and 7pm.

The Iberico pork fillet marinated with Chinese wine and assorted herbs was a mouth-watering treat.

Higher fat content in Spanish pork lends to the meat’s juiciness, which oozes out in each bite to complement the marinade.

The giant grouper stewed with fish maw and sea whelk has a nice wok hei flavour.

Grouper tends to have huge flakes of meat, giving a nice texture to the palate. The dish was done perfectly to resemble comfort food at home.

Fresh scallop sauteed with mushroom and truffle did not disappoint either.

The earthy aroma and subtle garlicky flavour of truffles added a luxurious taste to the dish.

Waxed meat steamed rice is a common dish enjoyed during Chinese New Year but few can nail this dish as it depends on the taste of the Chinese sausage, liver sausage and waxed pork belly.

Grand Imperial’s version was perfectly done with the addition of crispy dried scallop to alleviate the texture and fragrance.

The a la carte item of Roasted London Duck is not to be missed.

“The duck, sourced from London, has more fat due to the colder climate which elevates the taste of the meat, ” Chow said.

The paper-thin crispy skin enveloping the meat was appetising and unlike other roast ducks, did not have the gamey taste that some find unpleasant.

Mild sweetness in the duck fat gives the meat extra flavour. There is also a range of ninko (Chinese New Year cake) and other desserts such as the red date ninko, red bean ninko and sakura shrimp radish cake and dried scallop yam cake.

The set menus are available at four Grand Imperial branches at Bangsar Shopping Centre and Hartamas Shopping Centre in Kuala Lumpur as well as Pinnacle Annexe (Bandar Sunway) and The Club, Bukit Utama in Petaling Jaya.

Grand Imperial Restaurant is also having an MCO Special Facebook live stream every day to promote its takeaway fare.

Those interested can order from the live stream’s order link, call or message 018-2919 999 for details.

Poon choy is also available at RM688 for six persons. Those who order via live stream can enjoy more discounts.

Online orders can also be done via www.grandimperial.alacarte.my 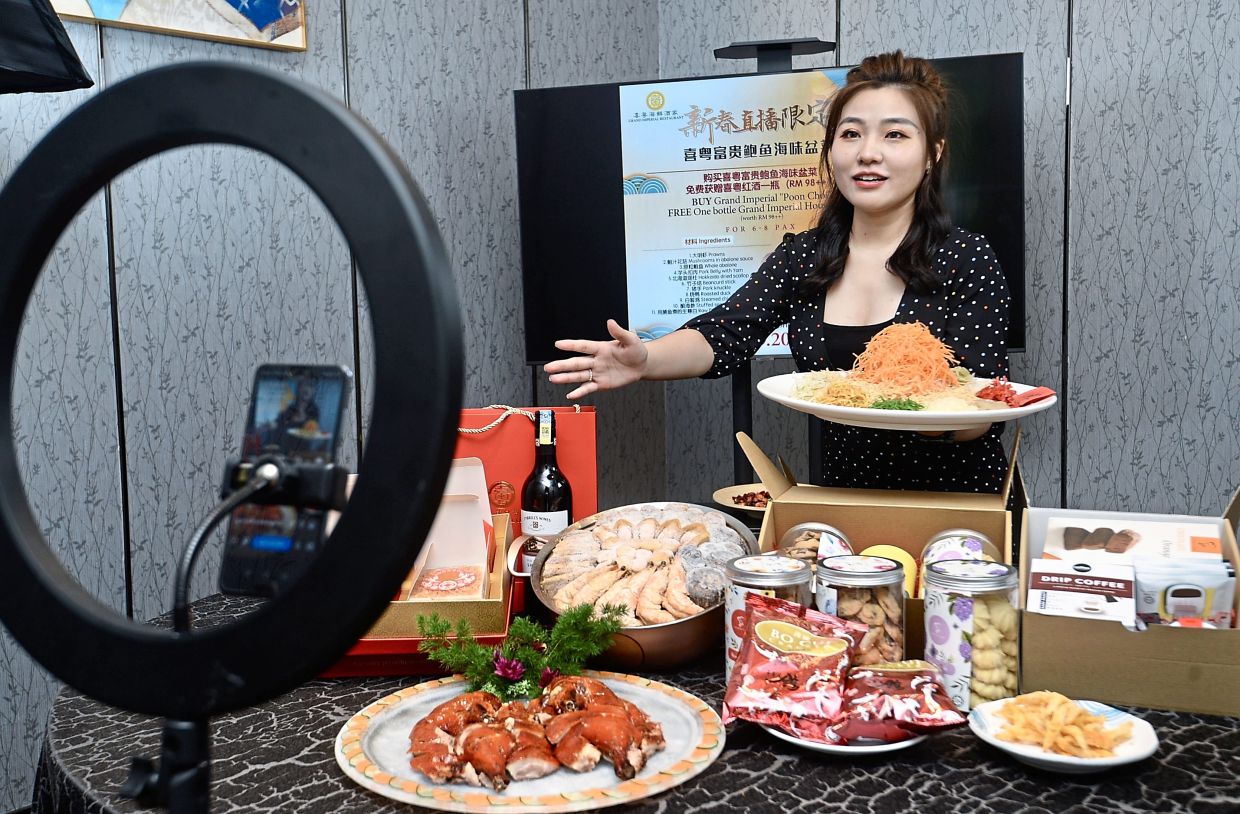 Diners can order an assortment of ‘ninko’ dessert at Grand Imperial Restaurant.

Roasted London Duck is not to be missed.

Poon Choy is also available at RM688 for six persons.