How do Malaysians really feel about eating out these days? 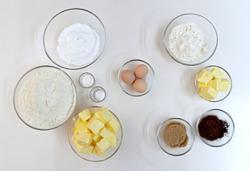 Lam (right) has been out a few times with his family but says he eats out a lot less now, as the queues at some restaurants are just too long. — ALEX LAM

IF you cast your mind back to the good old days of January and February this year, you’ll remember that dining out used to be a breeze. Literally the hardest decision a person had to make when eating out was deciding where to go.

But oh, how things have changed. With the advent of the global Covid-19 pandemic and the ensuing movement control order (MCO), the joy of eating out ceased to exist for a few months and was replaced by homecooked meals and takeaway, which became de rigueur options in most households.

But with restaurants open for dine-ins for the past two months, things are slowly but surely looking up.

Eating out amidst a pandemic

When restaurants were allowed to open for dine-in in early May, there were a few caveats in place: tables had to be placed two metres apart and the occupants in a single table were limited to four. Additionally, contact tracing measures like temperature scanning and the provision of customers’ contact details were also required.

While most of the rules are still in place, some of them have since been relaxed. In mid-June, Senior Minister Datuk Seri Ismail Sabri Yaakob announced that the four-per-table regulation would no longer be in place, so long as tables were large enough to accommodate bigger groups and adhere to social distancing measures.

So since the dust has settled a little and the new normal is in place, have regular Malaysians been embracing eating out once again? Yes, they most definitely have, although with far more caution and tentativeness than they ever had before. 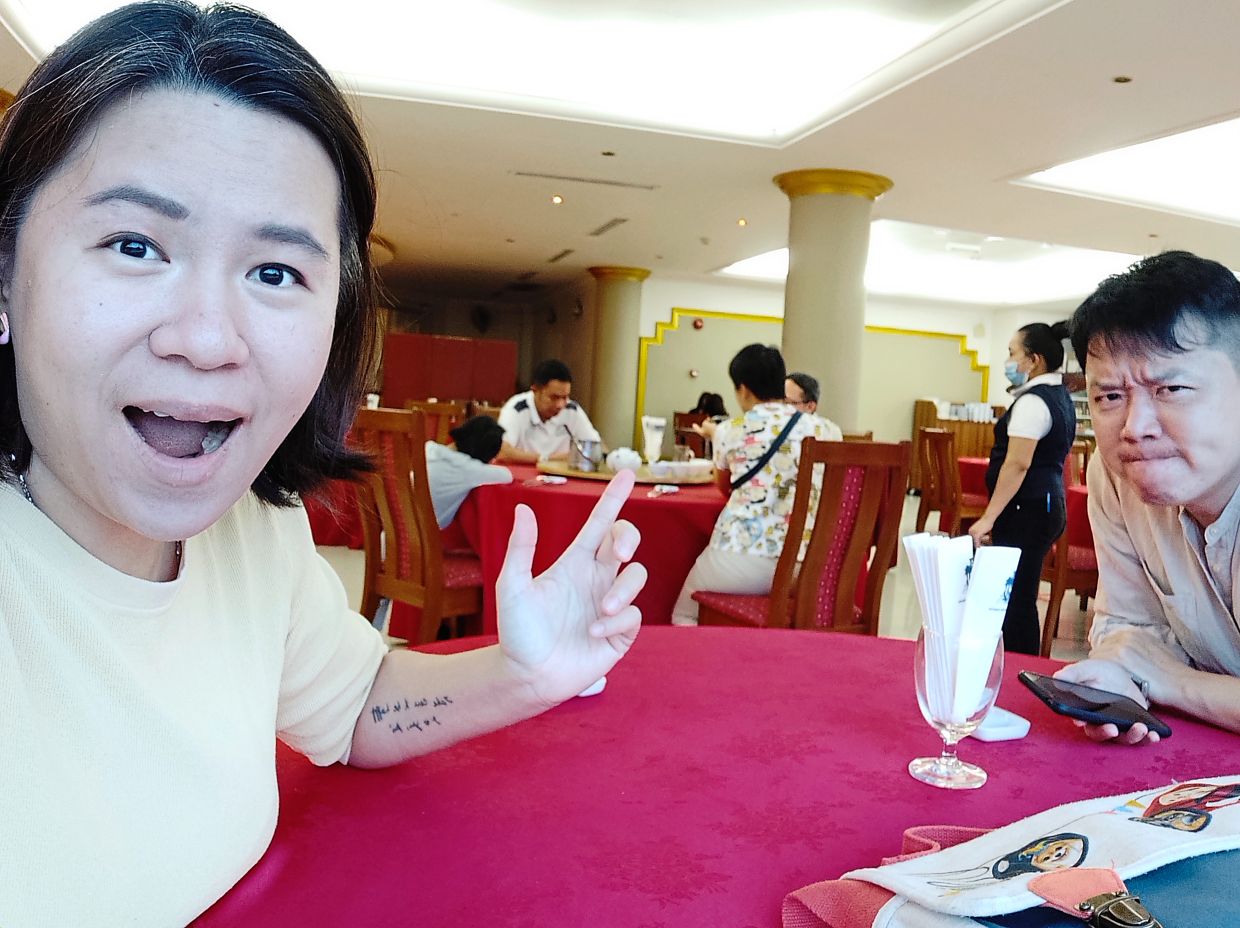 Yan (left) was upset as she and her husband Adrian Tan (right) were seated at a different table from her sister and family (pictured sitting at the table behind them). — YAN LAI PEEN

For lecturer Yan Lai Peen, 37, eating out was a regular part of her daily routine and one that she had been eagerly awaiting returning to.“Before, I would eat out for lunch and dinner every day. So yeah, I missed eating out a lot during the MCO.

“Since dine-in options became possible, I now go out quite often to eat economy rice (normally by myself); I think I’ve done this maybe about 20 times so far.

“And in terms of going out with other people or in a small group, I’ve probably done that about eight times.

“I don’t avoid eating out nor do I go out more, thinking ‘Oh, safety measures are in place’. Basically I just eat out when I feel like eating out, ” says the avid foodie.

CEO Alex Lam, 42, meanwhile says that after being at home for months with his wife and two young children, he couldn’t wait to take his family out once restaurants opened for dine-in.

“We used to eat out quite frequently – at least a few times a week. And everyone had been cooped up for so long, so I wanted to give them a treat. The kids like sushi, so we just found a sushi restaurant that seemed to be safe and that was our first time eating out again, ” he says.

Since that initial experience, Lam and his family have eaten out about five or six times, but he confesses that it is nowhere near as often as they used to dine out.

“Well, I’m not afraid per se of getting Covid-19 at this stage, but I think it’s just the comfort level and convenience of dining out.

“If it’s a long wait or not conducive, then it might be easier to just get food delivered, ” he says.

Others have developed a layer of caution in their approach to eating out. Public relations executive Muhammad Zaki Mahmood, 34, for example, used to eat out every single weekday but now restricts himself to dining out on weekends only.

“I am so used to eating out, so I wanted to eat out again as soon as I could. But I am a bit cautious now when I eat out and I am quite choosy with where I go.

“I usually go to restaurants in malls, because I think they are following standard operating procedures (SOPs), so I have the confidence to eat there, ” says Zaki, who has eaten out about 10 times since dine-ins were allowed, a far cry from the daily restaurant meals he used to enjoy. 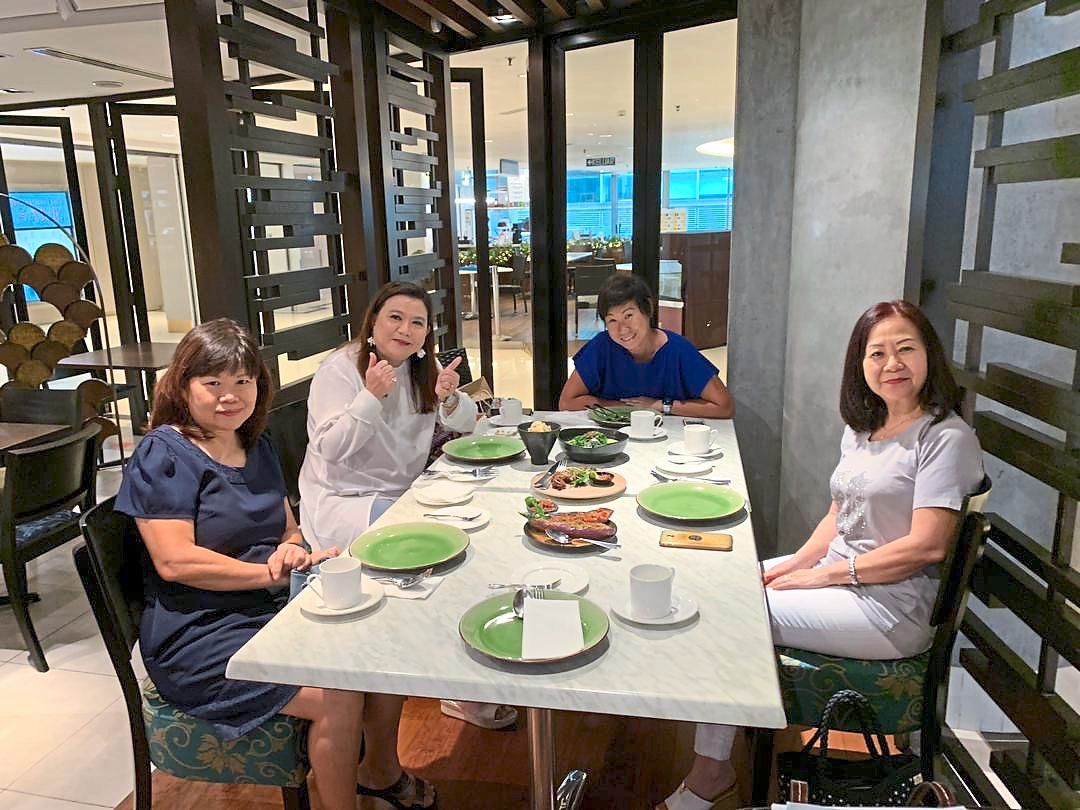 Wong (seated left in blue) enjoyed her experience eating out but says she will only dine out for important occasions now, as she doesn’t want to go out too much. — MELANIE WONG

For unit trust consultant Wong Soo Mooi, 64, the decision to eat out again was based on the fact that her friends had arranged a long-awaited reunion lunch, which fell through because of the MCO.

“We were really looking forward to meeting up, so when dine-ins were allowed, we thought ‘Ah, let’s go for it’.

“So five of us got together for a meal at our favourite restaurant. And it felt so good to be able to go out and have a meal with friends.

“We practised the SOPs – we didn’t hug each other, we didn’t even shake hands although we wanted to, but we just kept it at that because three of us are above 60 and we have children at home, so it’s better to at least try to be safe, ” she says.

Although she enjoyed her experience at the restaurant, Wong says she is still careful about eating out and has restricted herself from dining out on numerous occasions because she has a certain level of wariness about being out and about in public.

“I wanted to go out for my daughter’s birthday and to celebrate Father’s Day, but in the end, we decided ‘Ah, never mind, we will eat at home instead’. These days, I will only eat out if it’s for a very good reason, ” she says.

All the diners I spoke to understand that restaurants are required to abide by the new regulations in place – something that doesn’t really require much exertion on their part anyway.

“Getting my temperature taken and filling out my contact details just takes an additional one minute, so I don’t really find it a hassle or a nuisance to do, ” says Yan. 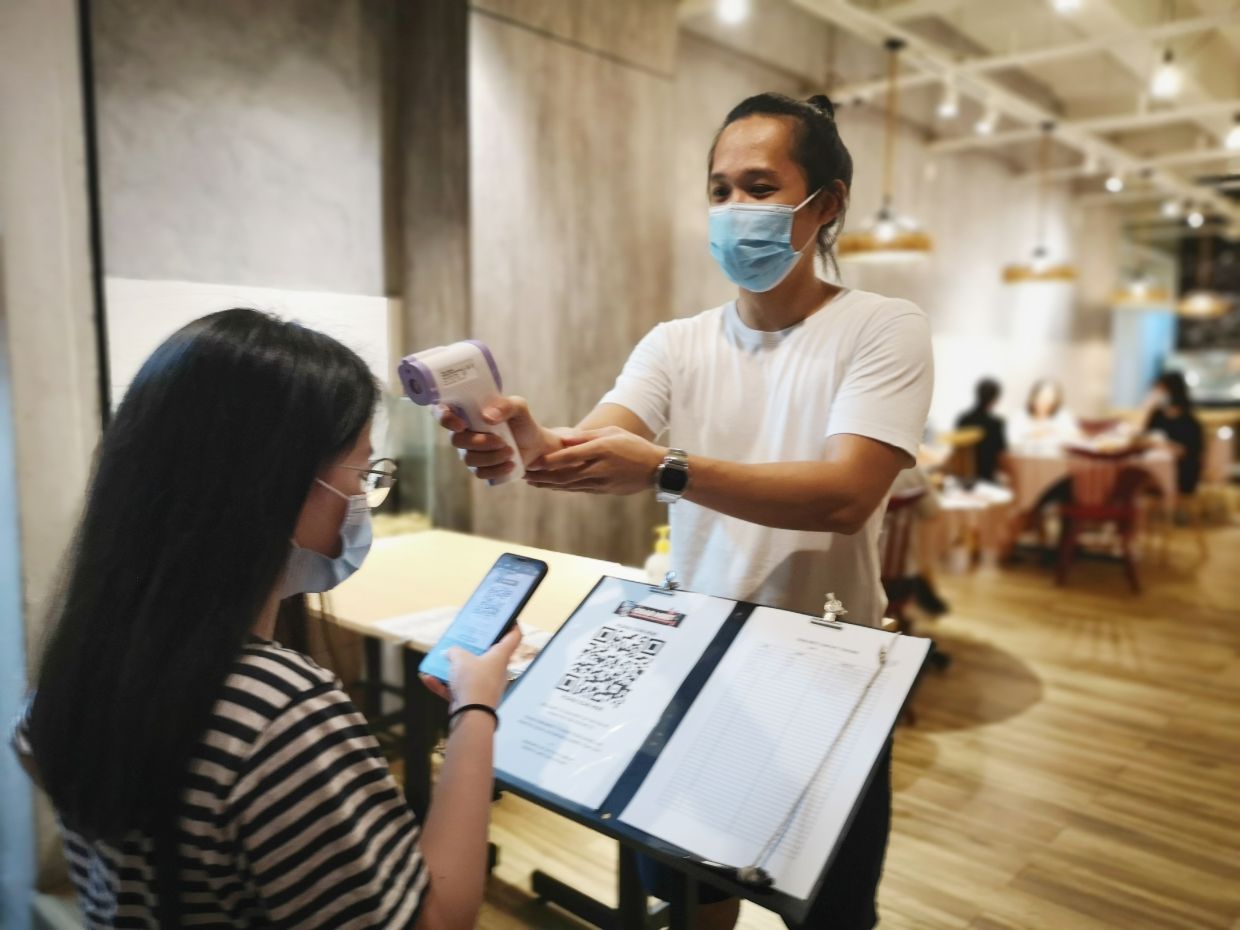 Most diners say they don't mind additional steps like getting their temperature taken and filling out their contact details as it only takes an extra minute to complete. — CRAB MEET RESTAURANT

Some diners are also very steadfast about going to places where the regulations are followed to a T.

“I had a bad experience when I went to a neighbourhood warung.

“I could tell they were not following good SOP, and I didn’t want to risk my health, so I left. Since then, I have stuck to mall restaurants, ” says Zaki.

Wong says for her next meal with a small group of friends, she has called in advance to make sure the restaurant is complying with all the necessary SOPs.

“I definitely look for places where the hygiene and sanitation measures are higher. I am going out with my prayer group next week and the restaurant has assured us that our table will be a distance away from the next table, so we are comfortable eating there because of that, ” she says.

But some eateries are more cautious than others.

Yan says although the government now allows more than four people to sit at a table, she recently went to a restaurant with her husband, sister, brother, nephew and niece. Although there were only six of them and the table was quite big, the restaurant refused to seat them together.

“My family of eight had been to a seafood restaurant where they seated us at a table meant for 16, so there were gaps in between.

“But this restaurant refused to put us at the same table, so my family and I had to split up.

“But the food only went to one table, so I had to go to the main table to scoop the dishes onto my rice. It was a bit of an ‘Aargh!’ moment, ” she says. 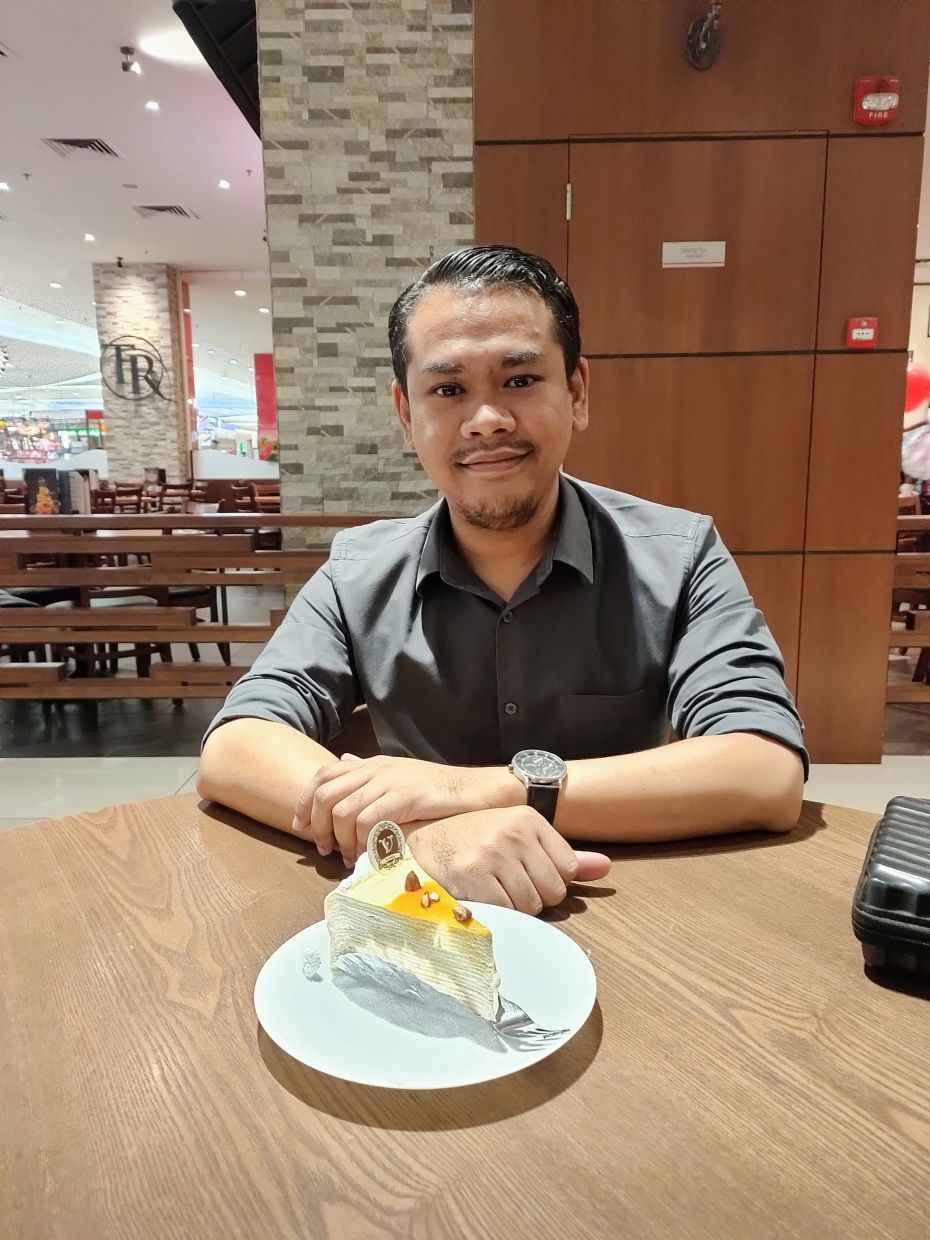 Zaki is far more cautious about eating out now and also prefers to dine out in much smaller groups. — ZAKI MAHMOOD

It’s generally a good idea to check a restaurant’s social distancing rules, and check how your party will be seated when making a booking.

Other diners have found that adherence to the SOPs has resulted in long queues, which has deterred them from eating out.

“I brought the kids to a fast food outlet once and they said that the wait time was 30 minutes for a table. So I decided to do takeaway instead, ” says Lam.

In many ways, the structure of eating out has changed dramatically in just a few months. What used to be a fuss-free, almost thoughtless affair has become an experience weighed down by premeditation and precaution (much like most other public activities).

“I have to make sure I bring a mask when I eat out – I don’t think restaurants will turn me away, but it’s just social responsibility and social etiquette. And I also don’t want people to be looking at me like, ‘Why are you not wearing your mask?’ So I have to be aware about bringing a mask when I am entering a restaurant, ” agrees Yan.

Zaki meanwhile says that he exercises far more care than he used to when he ate out before.

“For me, the way I dine out has changed. I always bring my own hand sanitiser with me, even though nearly all restaurants provide it – it just makes me feel safer.

“And these days, I’ve stopped eating out in large groups. Before, I used to eat out with eight to 10 of my friends – we would have coffee and lepak.

“But now, we restrict it to just three or four of us and we only go to restaurants that we are confident are following all the SOPs, ” he says.

Wong meanwhile feels that although eating out has changed, this is simply the new normal and will likely be the way people eat out in the foreseeable future.

“Yes, it’s definitely going to be the new normal – we just have to get used to it because it’s for our own good, ” she says pragmatically.

Order in today to have Grabfood delivered to your doorstep! Apply Grabfood promo code for additional savings on your orders 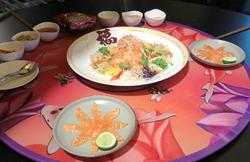