Tasty tradition of saying ‘thank you’

So, the initial expectation was a dish similar to a crisp, roasted bird typically found in a mom-and-pop roasted meat establishment.

But the chicken dish presented as part of the Longevity Sau Gong Menu at Summer Palace in Putrajaya Marriott impressed by superseding expectations.

The bird was cooked by patient hands that took care to preserve the meat’s juicy tenderness by bathing it over a wok of hot oil.

It was then rolled in a bed of roasted sesame seeds, using egg white to promote adhesiveness and an even coat.

Coating the crisp skin like a uniform, the sesame seeds gave the whole bird a nutty, aroma.

Surrounding it, were deep-fried rolls, the skin covered in crushed peanuts, concealing a springy paste-like filling of minced chicken, prawns and garlic. Pretty to look at and even more appetising to eat. 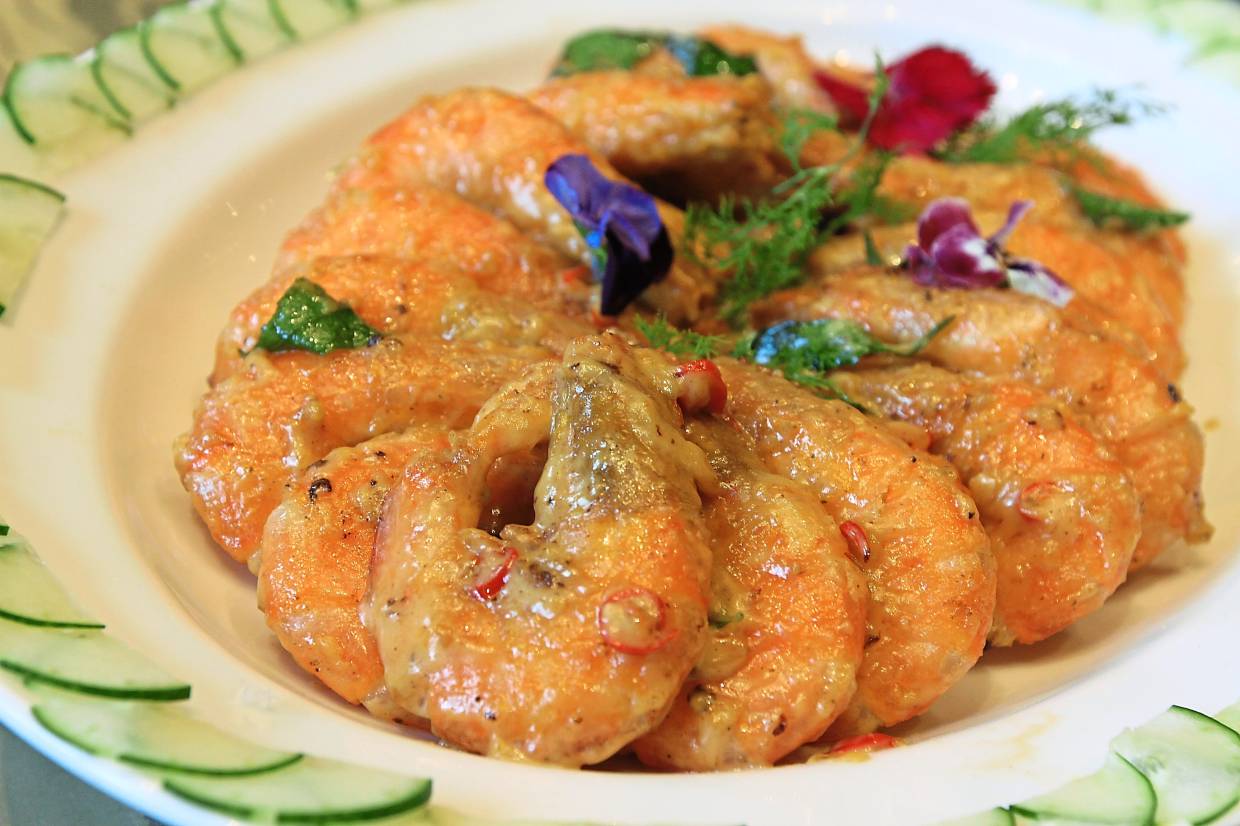 Fish and mushrooms to signify abundance. Prawns and sea cucumber to symbolise happiness. Noodles to stand for longevity.

But what made it stand out was the detail, in particular the choice of ingredients and the observance of cooking times and temperatures to preserve texture and taste.

The menu began with salmon yee sang. Amazingly, the house-made crackers kept their crunch even after the plum sauce was poured in and the salad given a robust tossing.

The secret, as revealed by Chai, is that wheat flour confection must be given a good stir around during deep-frying.

This is to ensure the batter is thoroughly cooked, leaving no damp spots that may render a cracker soggy.

A soup, double-boiled for three hours with long cabbage and dried scallops came next.

Carrying a heady aroma of chicken stock, it was served with juicy South African 10-head abalone (a sizing grade to denote 10 abalones in a 600g pack) and boletus mushrooms, responsible for imparting a darkened shade to the liquid. 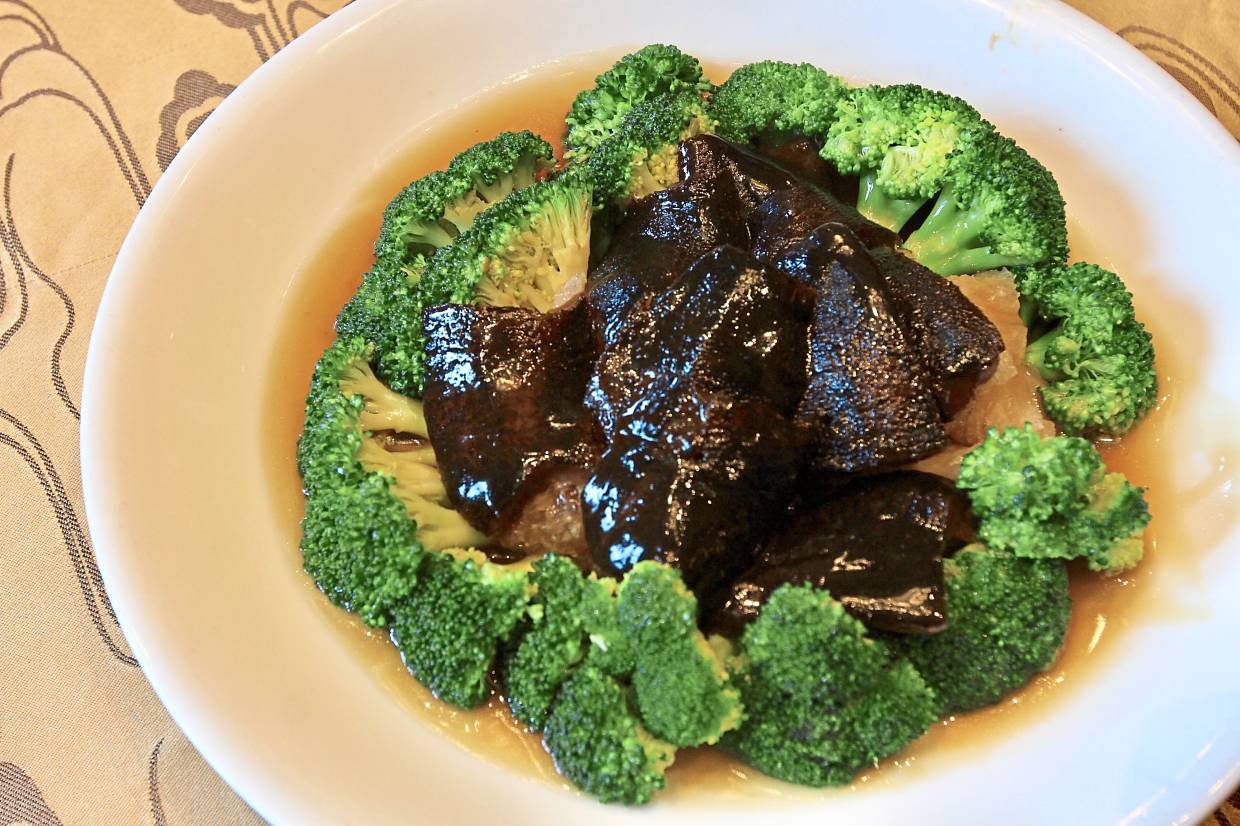 Chai was introduced to this fungus which grows wild in Heilongjiang, China, five years ago. Impressed by its fragrant properties, it has since become a mainstay for his soup recipes.

The grouper, all 1.2kg of it came in gravy of superior soy sauce with cloud ear fungus, cordyceps flower, straw mushrooms and halved red dates which tasted like sweet red grapes.

The flesh slid like silk across the palate and the skin, thick with gelatinous goodness, yielded easily at the prod of a chopstick.

To obtain the soft jellylike texture in the fungus and to coax the fragrant aroma from the cordyceps flower, they were stewed for an hour, separately from the fish.

For freshness, the grouper, which comes from a local supplier, is delivered live in oxygen-filled bags to the kitchen. 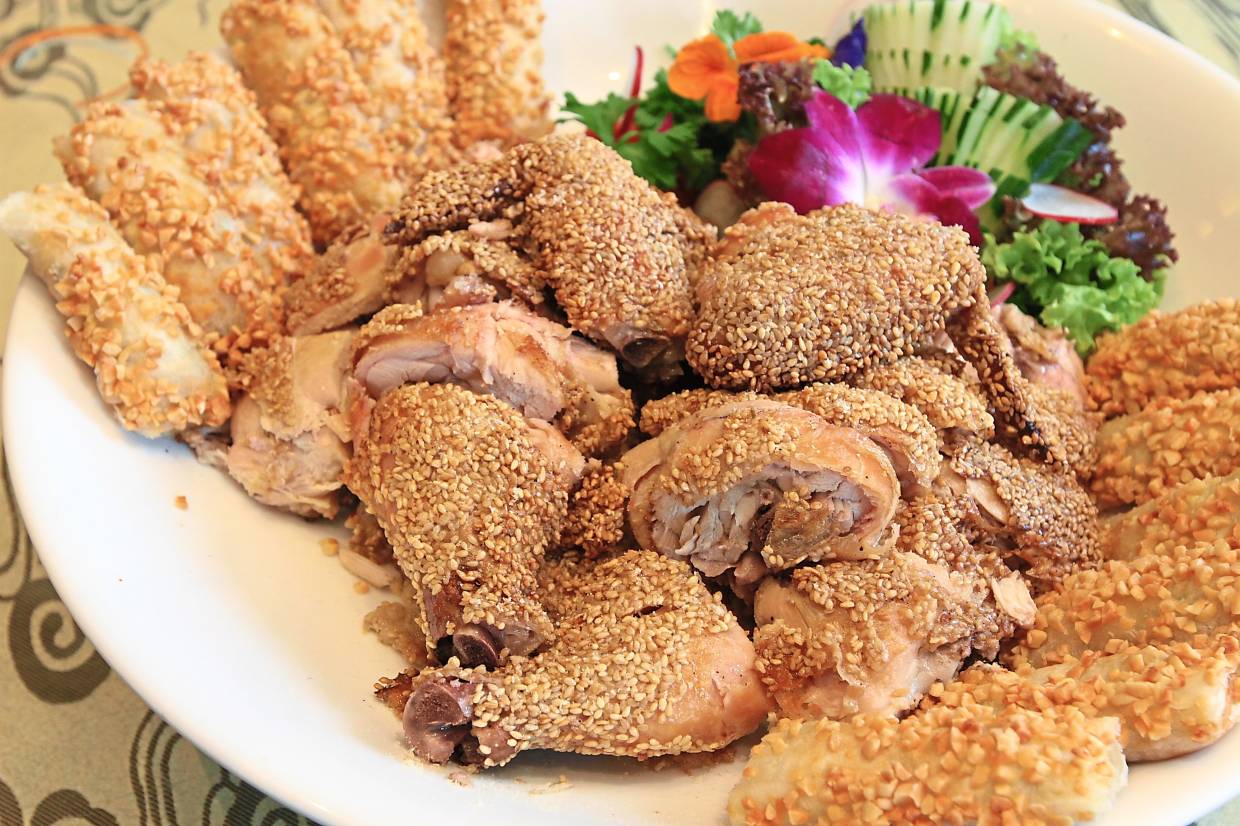 Succulent to the bite, it sported the rich flavours of duck egg yolk. The flavours had not only seeped into the flesh but the shells as well, making them pleasant to suck and chew on.

Black pearl sea cucumber from the Philippines and fish maw from Hong Kong came with a circle of broccoli florets.

A stir-fried egg noodle in a savoury gravy topped with sliced grouper, squid and fish came after.

It was impressive that much care was put on the seafood to preserve their natural flavours and succulent taste.

Cooked separately from the noodles, they are first blanched in hot water then put into an oil bath, lasting only a few seconds, to lock in the flavours.

This method “strengthens” the sliced seafood to prevent them from breaking apart while stir-frying.

For dessert, there was a sweet soup of chilled Sea Coconut with Snow Fungus.

The soup met expectations but the combination platters of Osmanthus Jelly and Glutinous Rice Balls with Lotus Seed Filling were worthy of second helpings.

Topped with shredded young coconut, the jelly’s springy texture made it fun to eat.

It practically goes “boing, boing” inside your mouth! And yes, the coconut was still juicy. You can practically taste the milk’s nutty richness with each bite.

What also made the deep-fried glutinous balls so wonderful to eat was the kitchen did not stinge on the filling.

The standard here is a 20sen sized lotus paste ball to every glutinous flour ball which can be no bigger than a 50sen coin.

From Jan 1 to Feb 10, the restaurant will feature its Chinese New Year Prosperity Set Menus with a mixture of classic favourites as well as Chai’s specialities, ideal for gatherings with friends and family.