A decade of supporting SMEs

The event, which marked a milestone in SOBA’s journey, brought together past participants of the awards to recognise the various successes of its alumni who have grown over the years.

Many of these companies have moved on to new markets, grown their sales multiple-fold and improved their operations by leaps and bounds. In a nod to SOBA’s decade-long effort to champion business excellence among SMEs, these companies were accorded certificates to recognise their growth journeys. A total of 98 awards were given out under nine categories that night. It is hoped that this recognition will encourage them to grow even further and inspire more businesses to follow in their footsteps.

The participants were also inspired by Sunway Group founder and chairman Tan Sri Dr Jeffrey Cheah who shared his experiences as an entrepreneur.

“As an entrepreneur who has achieved a bit of success - not too many, just a bit - allow me to share some of my thoughts on the subject of building a sustainable business.

“We are all aware of the skills and attributes needed to be a successful entrepreneur. They include passion, business and management knowhow, the ability to communicate well, to build and lead a team, hard work, tenacity and courage.

“Personally, I believe the three most important elements in building a sustainable business are mindset, leadership and values, ” said Cheah.

MBDA vice president Rasta Rashid, who displayed creations from her Batek brand, said that the SOBA winners provided inspiration to other businesses to strive for success. She hoped they will also inspire and encourage local fashion designers in the same way.

“I oversee hundreds of local fashion designers by helping them with funding, awareness creation and branding savviness. Fashion is a serious business and without a proper business plan, it will fail. What our designers lack is business acumen and the knowhow to address the right markets, be it local or overseas, ” she said.

The 10th Anniversary Celebration was the first gathering of sorts for the awards’ alumni, creating a unique networking opportunity for entrepreneurs to strengthen existing ties and forge new ones.

The attendees were also appreciative of this platform which serves as a reminder of the culmination of their efforts thus far.

“SOBA has been very supportive in highlighting local enterprises that are achieving strong business growth and implementing sustainable business practices. Creative avenue: Rasta was among the local designers who showcased their creations during the event.

“We are honoured to be acknowledged tonight for our years of growth and commitment to our industry, and also to have won SOBA’s Top-of-the-Class Awards in previous years. Our SOBA progression, from 2014 to today, showcases the milestones we’ve hit and the progress we’ve had growing our business.

“As Forefront progresses forward into the future with new ventures and offerings, we continue our hope to inspire and collaborate with other SMEs, and to learn how we can be a better business, an empowering employer, and creative pioneers in our field, ” said Forefront International chief executive officer Darien Mah.

Forefront received the certificates of recognition in the categories of SME Advocate, Entrepreneurial Spirit and Most Awards Won.

The creative agency participated in SOBA in 2014 and won the Silver Award for Best Employer. They continued to win more awards over the next few years, culminating in the coveted Malaysian Business of the Year in 2017. That year, they also took home the Platinum Award for Best in Marketing and Gold Awards for Best Brand and Best Employer.

As for 3R Quest Sdn Bhd, director Brenda Heah said receiving such recognition years after its SOBA wins served as a good morale booster for its staff.

The company was recognised under the Entrepreneurial Spirit, Most Awards Won and Powerhouse categories. 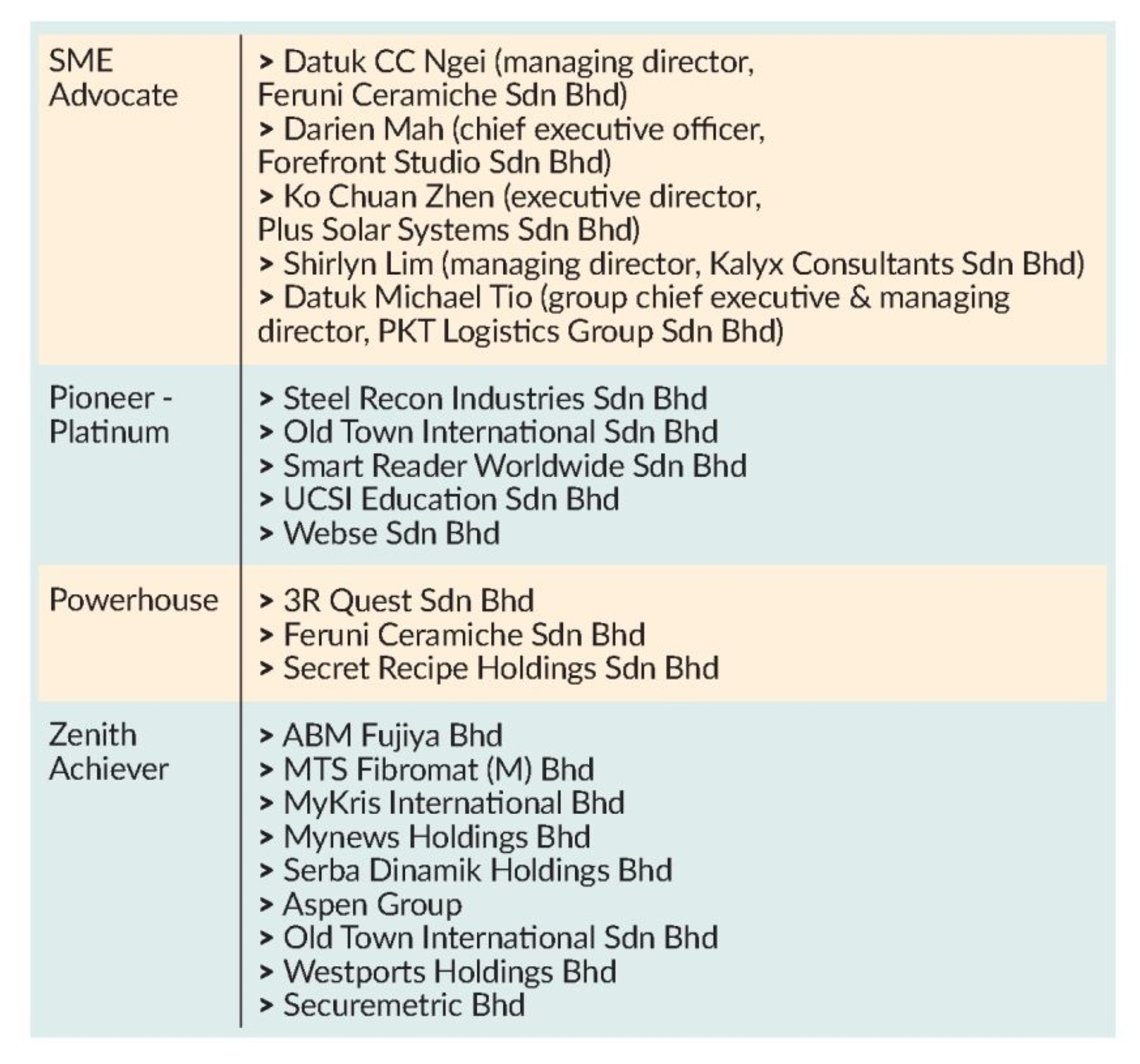 “With this recognition, it’s much easier to see the culmination of our efforts over the years, since we’re always moving forward. Participating in SOBA has given us more confidence in applying for other awards as well, ” she opined.

3R Quest has won six awards since it began participating in SOBA in 2011. Starting with the Gold Award in the Environment category in 2011, the company went on to win Platinum Awards in the Best Green Initiative category in 2012,2014 and 2016. They also took home the Silver Awards for Best in CSR in 2015 and 2016.

“The SOBA 10th Anniversary Celebration is a good start in boosting networking opportunities among SOBA alumni and we hope there’s more to come, ” she added.

Heah noted that this platform to connect with SOBA alumni would create new opportunities for the company as it seeks its next stage of growth by potentially diversifying into related verticals.

with Digi, PKT Logistics Group and RHB Bank as main sponsors, Credit Guarantee Corporation Malaysia as co-sponsor and Matrade as official trade promotion partner. This year’s awards is endorsed by the International Trade and Industry Ministry, supported by Bursa Malaysia and audited by BDO, with dimsum as the media partner.

For the full list of winners, look out for the SOBA 10th Anniversary Celebration StarSpecial on Nov 13.