PETALING JAYA: The Asia-Pacific economy, including Malaysia, is coming out of an extremely weak third quarter, according to Moody’s Analytics.

The global research outfit said the third quarter was weighed down by the combined effects of mobility restrictions to contain the Delta variant of Covid-19 and the resulting supply-chain disruptions and weak domestic demand. 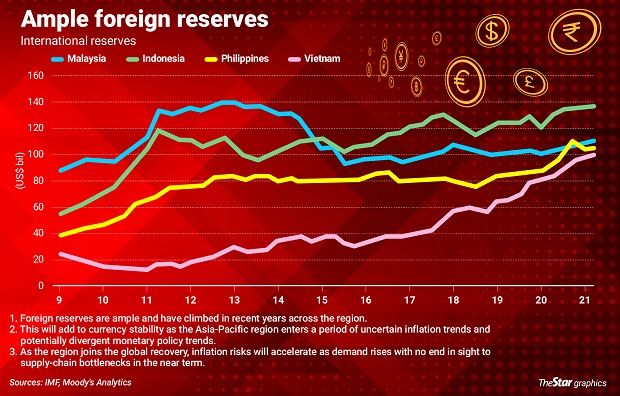 Nevertheless, it pointed out that the Delta variant wave has subsided significantly across all of Asia, and most importantly in South-East Asia, except for Singapore.

As a result, all countries are easing mobility restrictions, at least for vaccinated persons.

In the case of Malaysia, local mobility has been improving since early June, based on the Google Mobility Index data.

Currently, the index reading is back to its mid-April levels prior to the arrival of the Delta variant.

The statement from Moody’s Analytics came after the International Monetary Fund (IMF) slashed Asia’s growth forecast for 2021 to 6.5%, down from its April forecast for a 7.6% expansion.

The forecast was lowered due to a surge of the Delta variant and lagging vaccinations.

Much of the downgrade was because of a slower growth in India, which is forecast to grow 9.5% in 2021, and South-East Asia, where the virus continues to wreak havoc.

Among South-East Asian countries, Malaysia suffered the third worst downgrade after Myanmar and the Philippines, as the forecast was cut to 3.5% from 6.5% earlier in April.

“Although Asia-Pacific remains the fastest growing region in the world, the divergence between Asian advanced economies and emerging market and developing economies is deepening, reflecting vaccination coverage and policy support, and medium-term output levels in emerging market and developing economies are expected to remain below pre-pandemic trends,” the IMF said in its Regional Economic Outlook report for Asia and the Pacific.

With many parts of Asia-Pacific opening up, Moody’s Analytics said the easing of mobility restrictions will raise demand for local goods and services throughout the region.

Moreover, the ability to fully staff manufacturing facilities will allow foreign trade to continue to provide a foundation for the region.

“This will help ease supply chains in the region, for example, as electronics and auto parts plants ramp up production in Malaysia and Thailand, with supplies of consumer goods starting to flow again from Vietnam’s many industrial parks.

“But it may take time, particularly in Vietnam, for migrant workers from rural areas to be comfortable returning to the urban production centres,” it said.

In addition, commodity exports will also help drive the region’s producers in the fourth quarter and into next year.

“Crude oil, palm oil, coal and iron ore, among others contribute to stable trade balances in Indonesia and Malaysia,” according to Moody’s Analytics.

As for Asian countries that are highly dependent on the travel and hospitality industries, including Malaysia, the reopening of international travel is a boost to economic recovery.

Meanwhile, Australia’s state of New South Wales is working toward a limited opening by Nov 1.

Processes set up to manage these travel lanes will provide examples for the rest of Asia, it said.

Moody’s Analytics pointed out that the pattern of economic growth in Asia has turned on its head, with China slowing down but the South Asia and South_East Asia regions improving.

“But barring another wave of some new variant of Covid-19, the entire region should recover, with even the regional laggards the Philippines and Thailand, recouping their lost output from the pandemic by the end of 2022.

“This is assuming there is no further Covid-19 wave next year, or at least that improved vaccination rates and natural immunity allow policymakers to limit any mobility restrictions during any subsequent wave of the virus,” it added.

This is because demand will rise with no end in sight to supply-chain bottlenecks in the near term.

“Consumer price inflation is less than 2% across much of the region, it exceeds 4% only in the Philippines and India,” it said.

Commenting on the Asia-Pacific currencies, Moody’s Analytics said foreign exchange volatility may remain modest in the coming year if inflation persists and as more central banks move to normalise their policy rates.

“So far, however, exchange rates versus the United States dollar are close to their pre-pandemic rates and the strong foreign trade positions of China and Taiwan keep their currencies somewhat elevated.

“Even Indonesia’s rupiah has stabilised following initial weakness at the onset of the pandemic, bolstered by relatively stable capital flows into the country and throughout Asia-Pacific.

“The Malaysian and Thailand currencies reflect the impact of Covid-19 movement restrictions on their export-based and tourism industries, but this should prove temporary,” it said.

Meanwhile, on foreign reserves, Moody’s Analytics believes the reserves position remains ample and has climbed in recent years across the region.

This will add to currency stability as the Asia-Pacific region enters a period of uncertain inflation trends and potentially divergent monetary policy trends.

“Monetary policy is expected to remain accommodative in China into 2022 to ensure a stable growth rate.

“Similarly, policy rates are expected to remain stable in most of South-East Asia, Australia and India through mid-2022 as policymakers focus on continued economic recovery while the region emerges from its Delta-wave movement controls,” it added.